Respawn Entertainment’s latest shooter, Apex Legends, was fired into the world yesterday, bringing a slice of lightning fast battle royale to the table.

I’m still getting my head around it and working out a verdict, but I’ll say this in the meantime: the cosmetic options are ruddy brilliant.

Good cosmetics are the core of the whole experience of course. As a free to play game, Apex Legends needs you to want to look cool as hell, but Respawn Entertainment have really outdone themselves here, with a mixture of weapon skins and character outfits to really help you stand out on the battlefield.

Couple this with the diverse mix of characters that you can take control of, you’ll soon want your best weapons and favourite legend to be clad in some fancy duds.

Getting the right cosmetics will cost you, but they seem to genuinely be quite interesting, with some neat-looking outfits and decent skins — you know, if you can look past one of the artists appearing to have an obsession with Warhammer 40k.

Here’s some of the best. One cool skin for every character and gun, in fact. Enjoy.

The good, the bad and the ugly: Apex Legends best skins
Bloodhound — The Plague Doctor 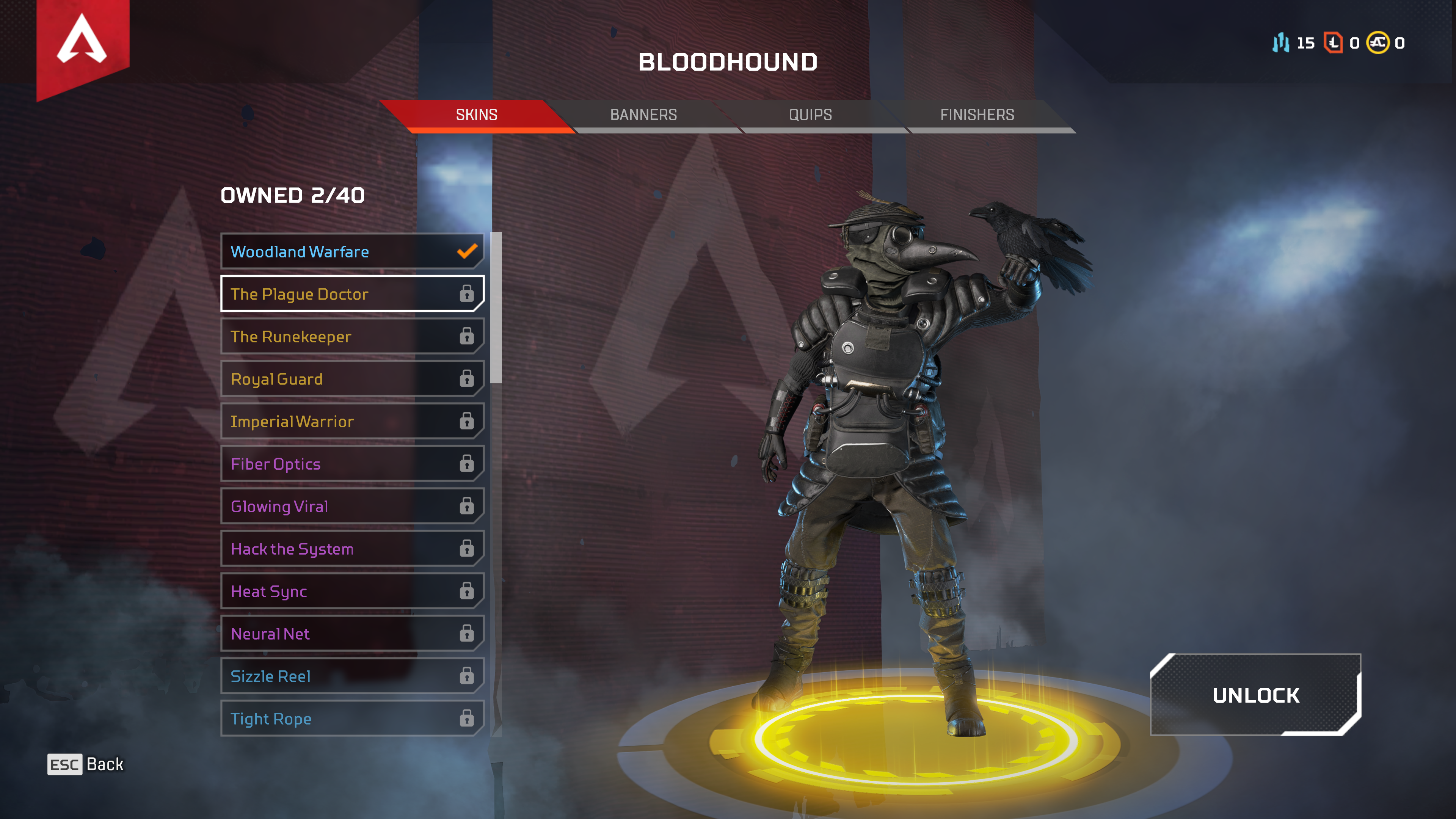 The Plague Doctor is a classic cosmetic. This one, for the tracker character Bloodhound, takes advantage of Bloodhound’s actual flipping raven to make this spooky character one to remember. Walking tank Gibraltar carries his bulk like a guy named after a mountain. Bunker Buster emblazons that bulk with hefty armour and military insignia. Although, why he’d need camo paint on his face when he’s the size of Godzilla’s kid is news to me. They know you’re coming buddy, you’re rumbling down the road like a bulldozer. Lifeline, the medic who has quickly become my favourite character because of my poor shooting skills, actually doesn’t have a great mix of cosmetics just yet. London Calling is a favourite though because it gives this healer a flash of punk flair, which totally matches the personality. Considering Pathfinder is a robot armed with a grapple gun and many other mobility boosting features, he doesn’t have a lot of cool skins.

Check this out though. The Tie Dye skin is an almost tasteful vomit of rainbow colouring, and the smiley face embedded in his chest just reinforces Pathfinder’s place in 90’s rave culture. 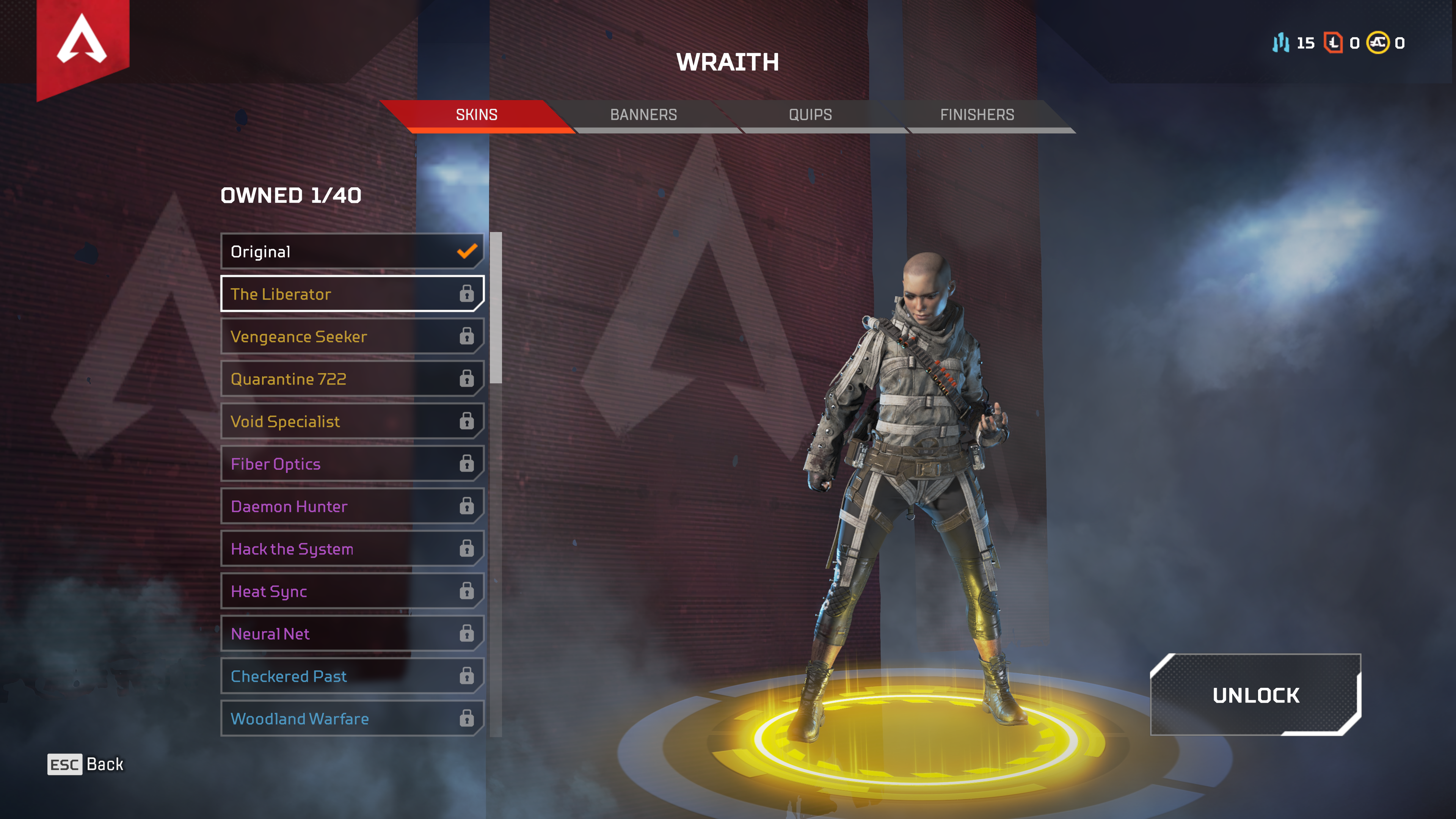 Wraith can teleport and messes people up with invisibility and portals. With that in mind, why wouldn’t you want to make her look like an adult version of Stranger Things’ Eleven / Alien 3’s Ripley? Frontline fighter Bangalore has a lot of cool skins, but I like this one, which outfits here for one of the most ill-advised spacewalks of all time. Sure, you can breath Bangalore, but don’t you want a space suit which doesn’t expose your hair to the ravages of space? What do I know, I’m not a space scientist. Caustic is an unlockable character, so I can’t really tell you what he’s good at or what he does. I can tell you that it takes a lot of confidence to wear a blindfold into battle. Rock on Caustic, but maybe consider just a regular pair of goggles next time? Mirage was too busy sewing patches all over his outfit when everyone else was given good cosmetics, but Hack The System has a cool green shimmer that passes over his body repeatedly. Lots of the weapons and costumes have particle effects to make them pop, but this one really sings for a paid character that doesn’t have a lot else in his arsenal. I think a nine year old designed this skin for the VK-47 Assault Rifle. I want to be that nine year old’s friend for sure.

Hemlock – The Glorious One Games Workshop’s lawyers will be in touch. GAMES WORKSHOP’S LAWYERS WILL BE IN TOUCH. 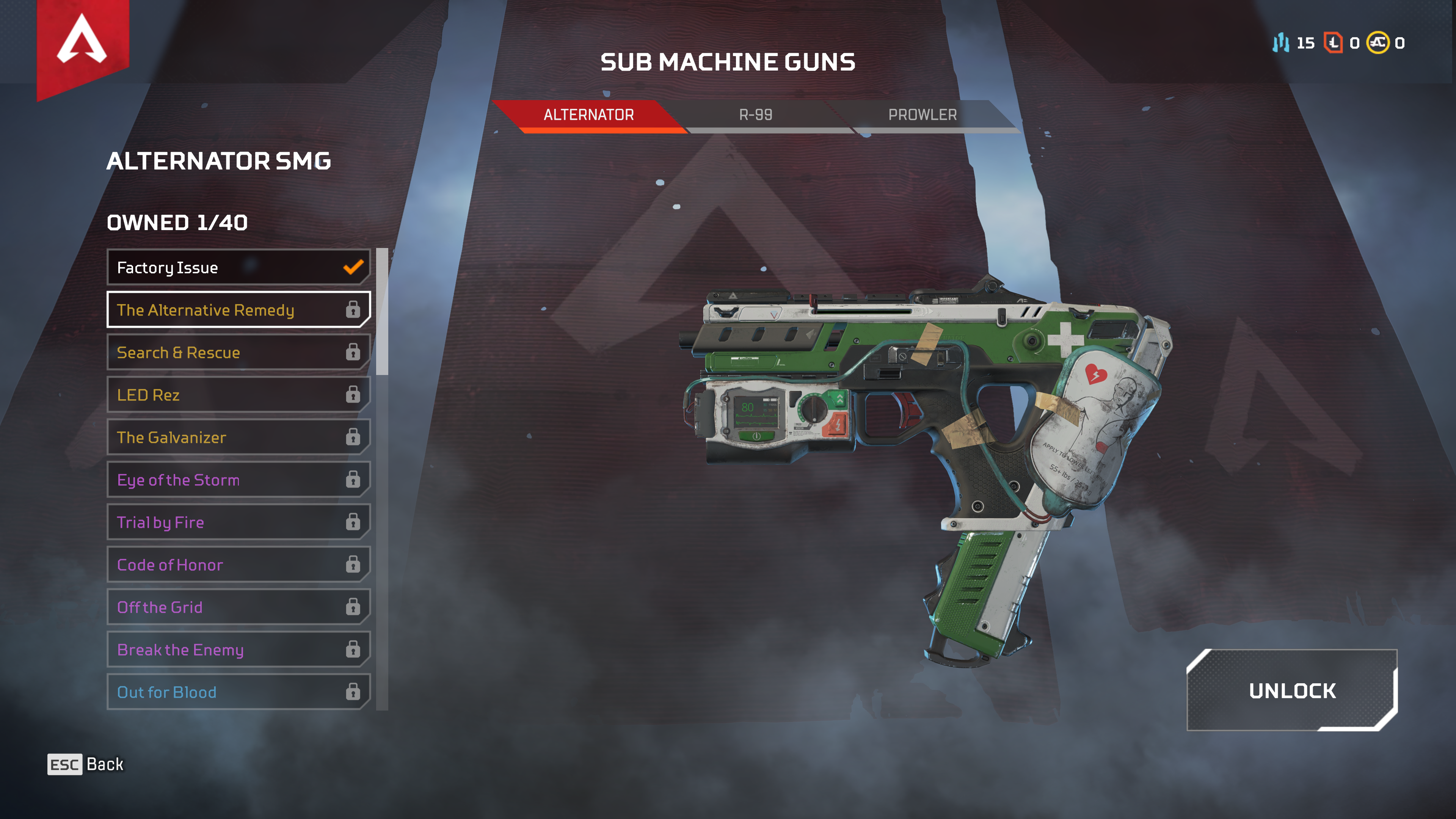 This is an excellent entry into the niche ‘guns that are pretend to not be guns’ cosmetics category. See also Rainbow Six Siege’s Caulk Gun for Caveira. This one has lots of little touches that I adore, and it’s probably one of my favourite silly skins in the whole game. If you use this skin you’re an edgelord, more focused on looking good than getting kills. Still, you’re going to look classy as all hell while you do it. 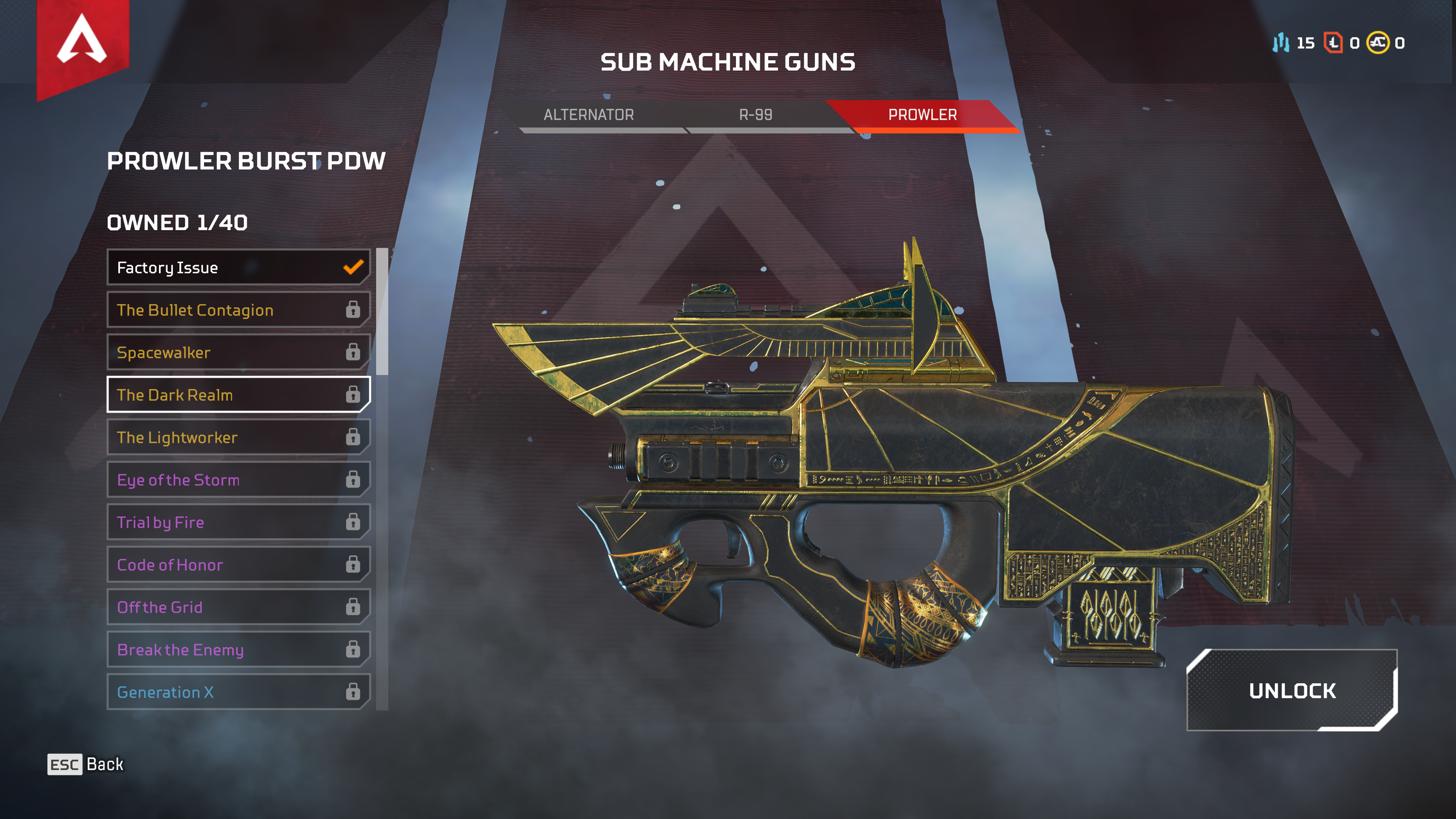 Ever thought your P90 analogy needed more quasi-Egyptian symbology? No, me neither. Still, this marks you out as someone with questionable taste and a desire to show it. The attention to detail here is really impressive. This isn’t tacky, this has gone beyond that to a place where it is now profoundly tacky. I adore this. Nothing says gun like ammunition wrapped around the feed tray cover rail of your light machine gun. If that left you in any doubt, you can also appreciate the find wooden detailing and the skull that’s peering out from under everything. This one looks like a laser beam, complete with exhaust ports and fixtures and fittings that seem to have been torn out of a space station. It is, however, not a laser beam but a regular machine gun. Announce this to your enemies with a hail of lead why don’t you? 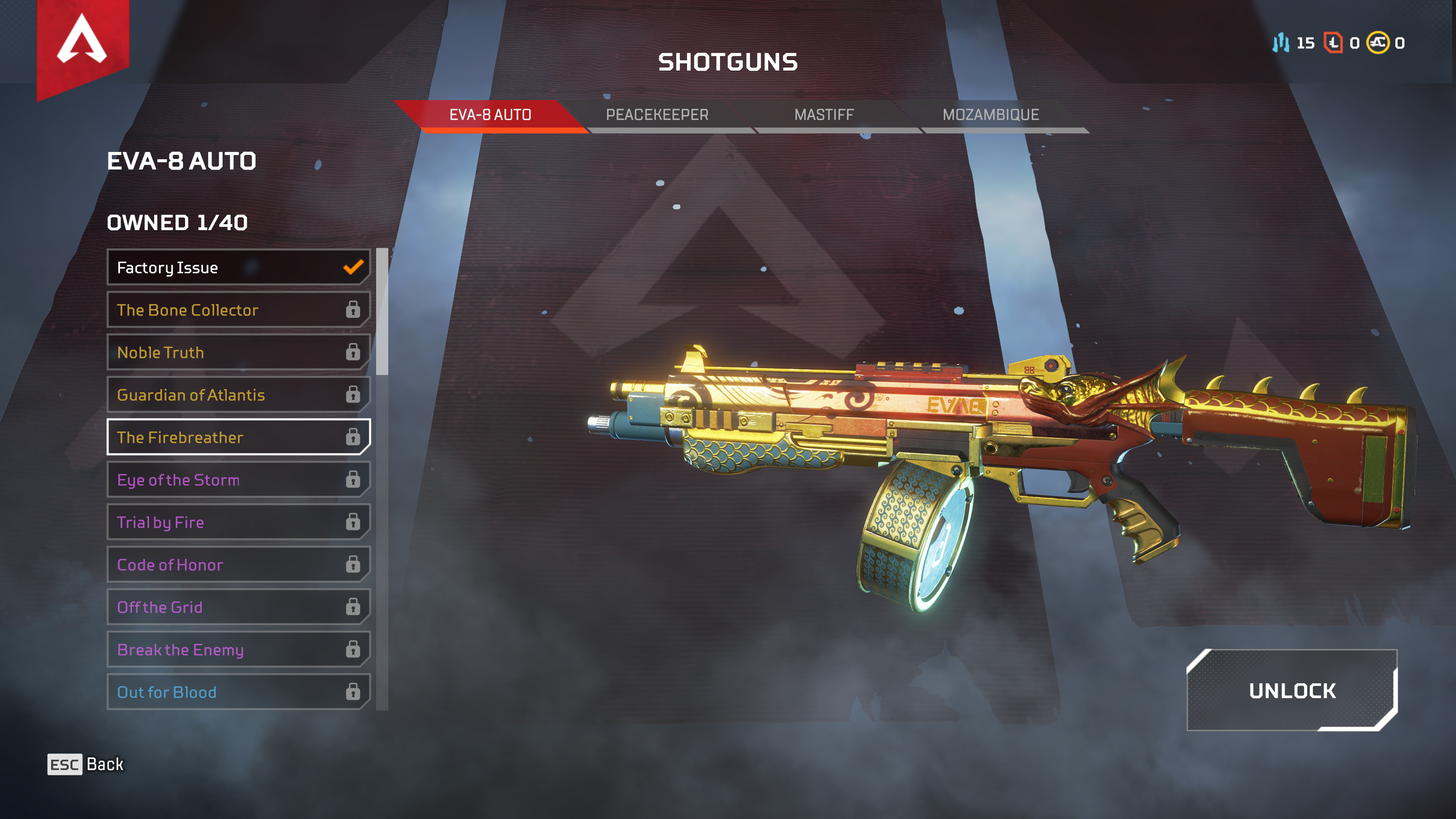 This is the sort of gun that the titular heroine in the Disney movie Mulan would have wielded, if she wasn’t stuck fighting with rubbish melee weapons. It is red, gold, and again the detailing here is phenomenal.

The Peacekeeper — The Superstar Wielding the lever-action Peacekeeper shotgun always makes me feel like a frontier sheriff, but the neon-hued The Superstar skin makes me imagine I’m a frontier sheriff but in space. Which, I guess is technical true here if you accept that the only crime I’m looking to prosecute is the crime of being alive.

The punishment is death. Also, there’s some weird screen furniture on this image due to a glitch. If you made it this far down, I won’t tell if you won’t. I think this one is supposed to be a game controller, replete with brightly coloured plastic, unfilled screw holes and even a little screen which seems to have a tiny Titanfall pilot on it. Fans of tiny details should notice the buttons have even been picked out as retro-styled controller buttons, and the trigger guard and handgrip are just beautiful. This seems to be a nice mix between Hellboy’s revolver and Deckard’s smaller weapon from Blade Runner. All I really know is if you point this tasteful piece at someone, they’ll be struck by its subtle quality shortly before they’re hit by several shotgun shells. 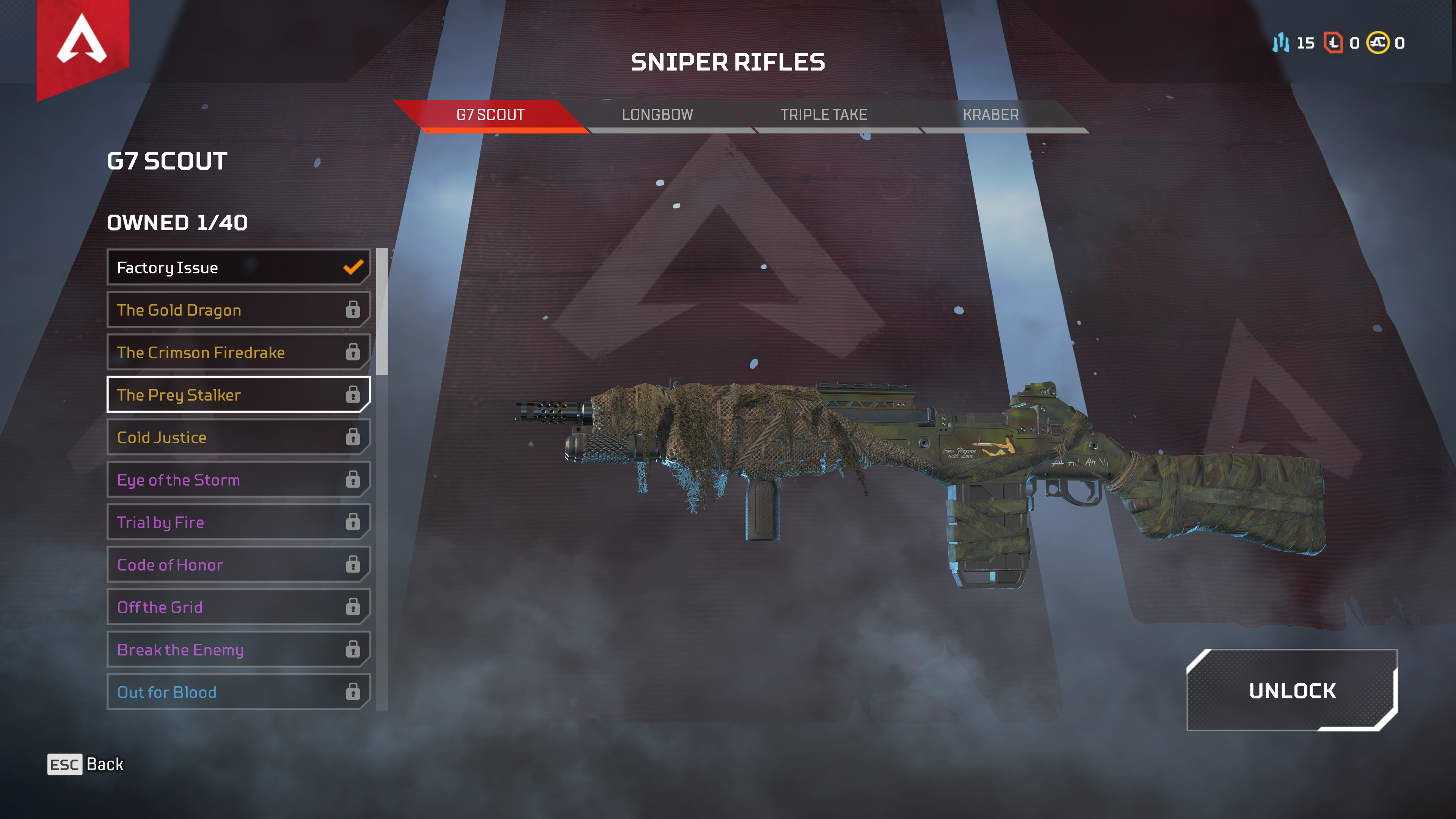 This is just a nice sniper rifle look. I’ve been writing about cosmetics for over an hour and I don’t have anything smart to say beyond: this looks nice. 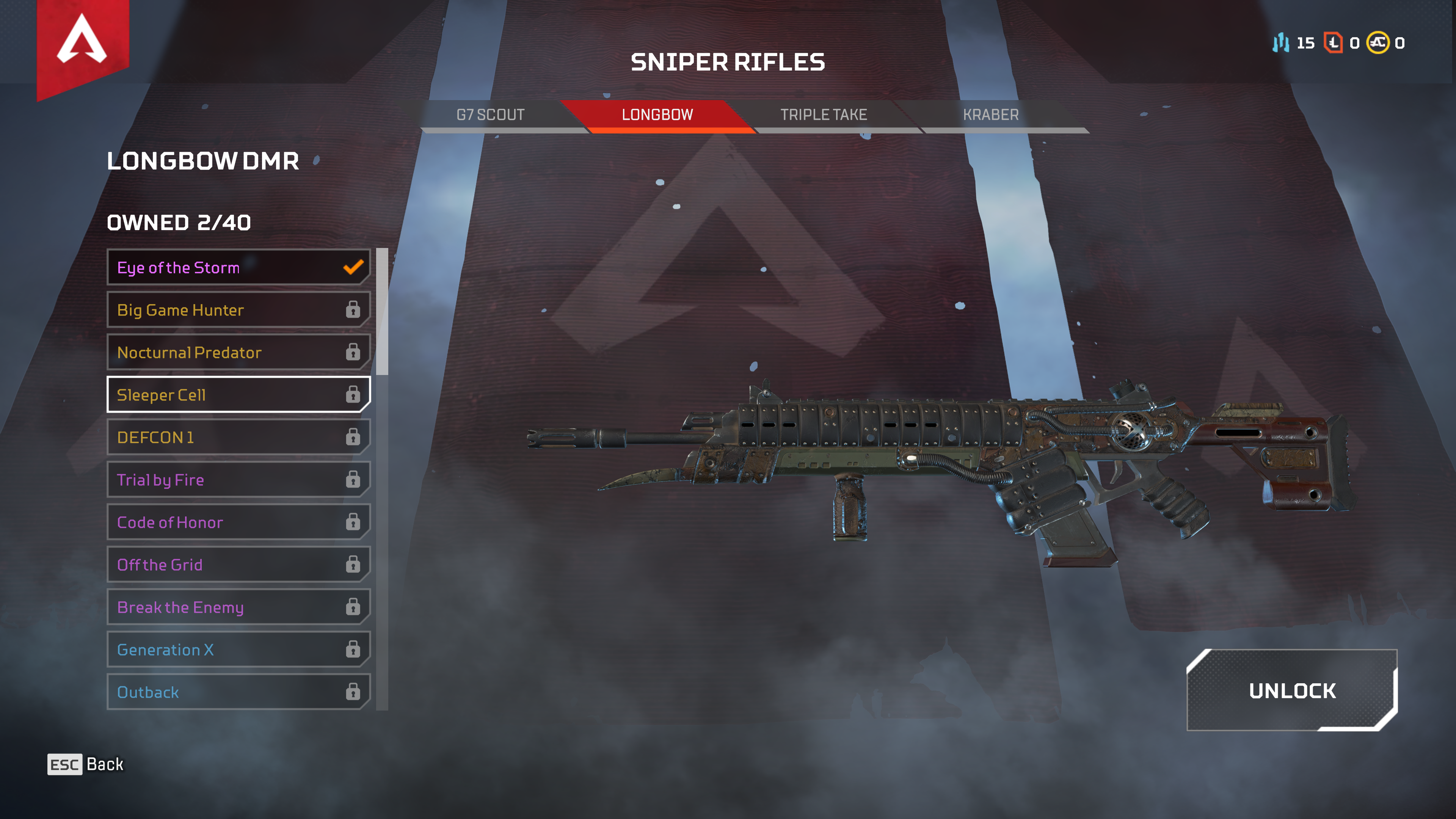 The Sleeper Cell skin has a few similarities with grimdark spaceships from a certain science fiction themed property. They look similar, and both are capable of messing up your day from a really long way away. 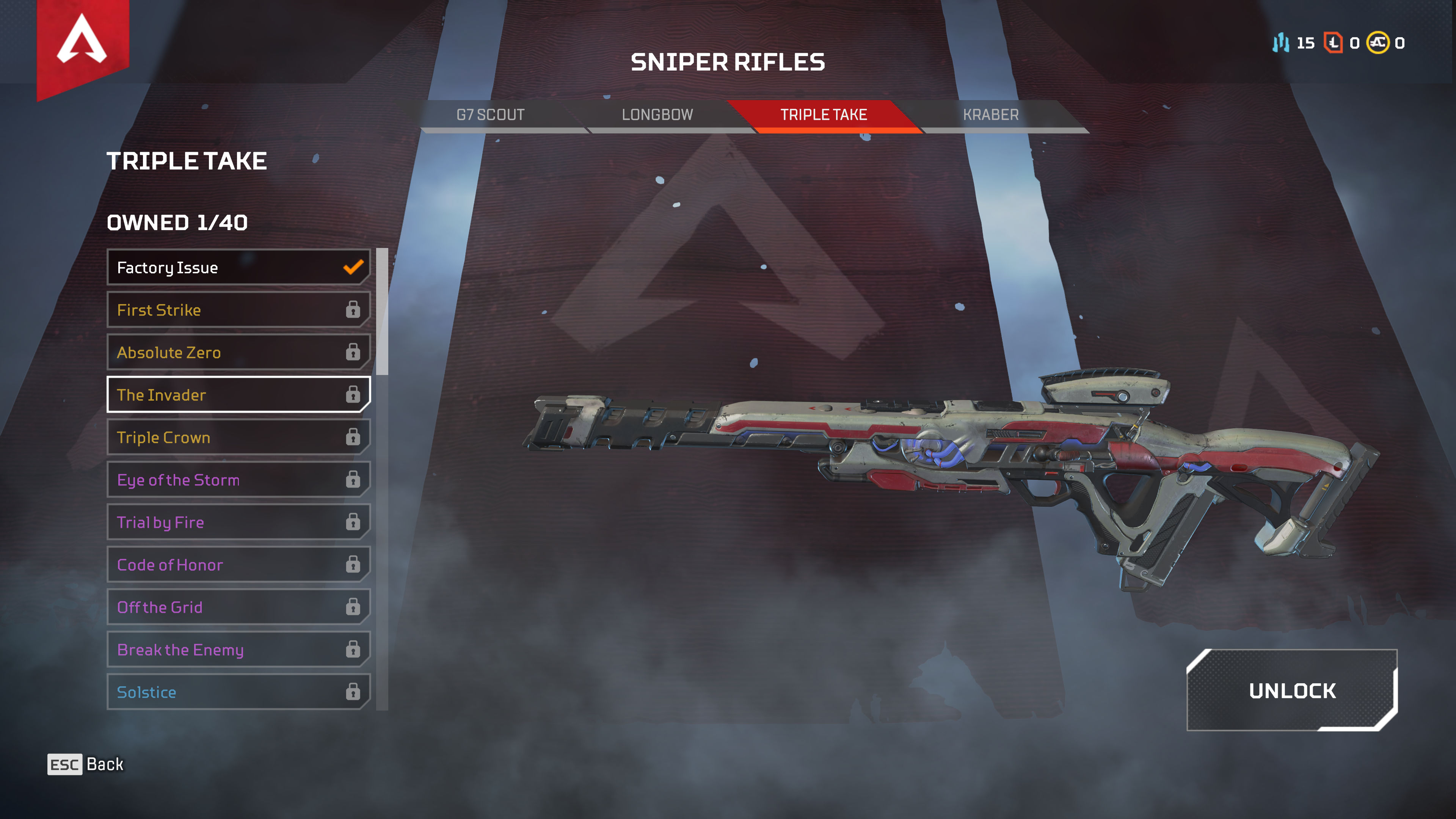 Hey, Destiny called about this skin for the Triple Take sniper rifle. They just wanted to say good job. This gun has karabiners attached to it. Again, it’s the subtle details here that really make the gun sing. Also, when you call your cosmetic skin The Snowpiercer… look, we loved the Chris Evans movie too okay? We know what you’re doing. The Wingman revolver is an impressive piece of kit by itself. The chunky handgun fires big bullets and there’s something to it that just works. However, this skin that makes it into a 1950’s sci-fi inspired ray gun. Nothing super special about Freezing Point, and so many of the RE-45 Auto skins are brilliant, but this one has some great use of colour, with the blue and black colours looking swell. The black isn’t even a flat black, but has some detailing. 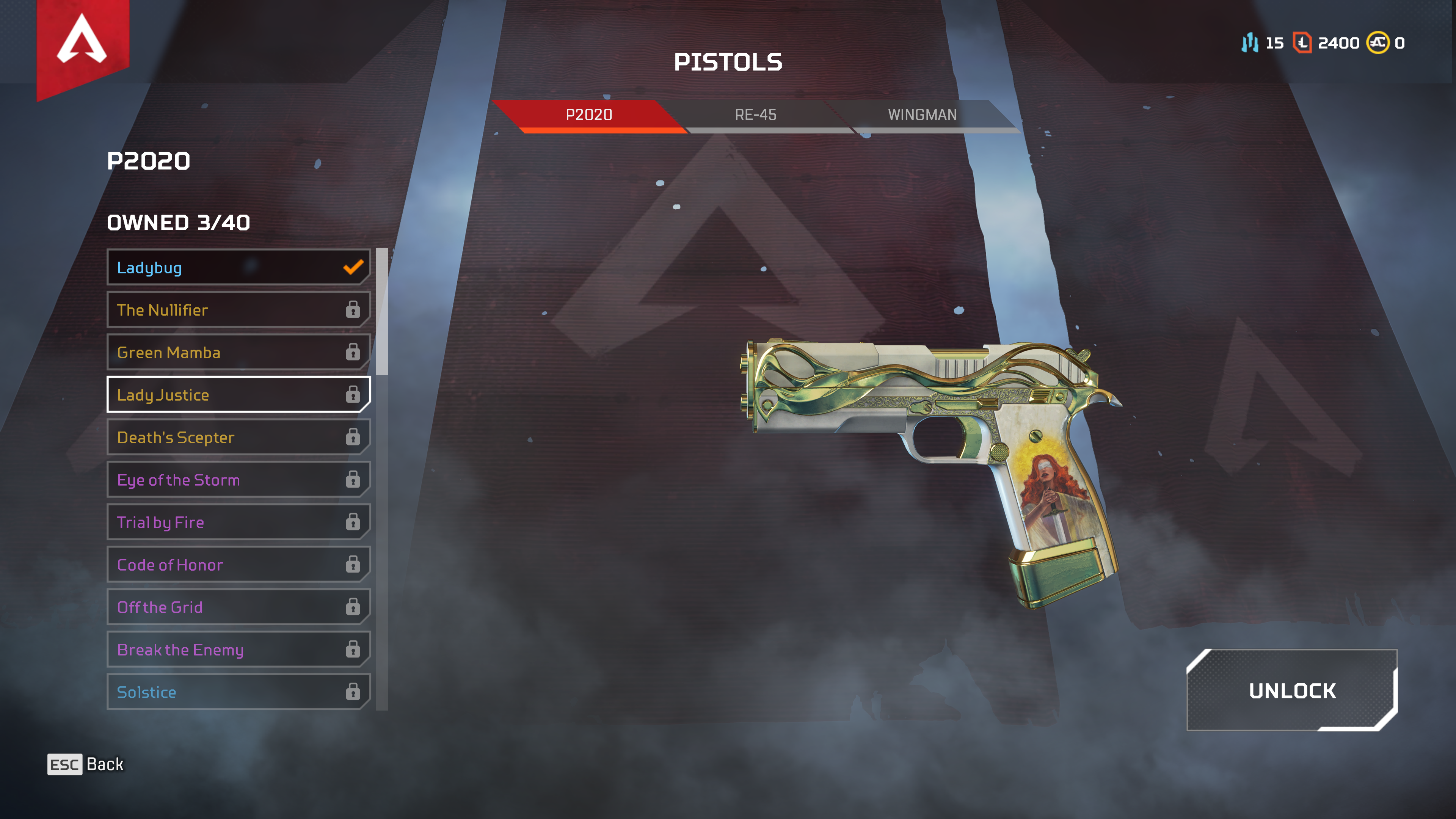 I think I saw this in one of the The Boondock Saints movies. I am entirely here for how over the top this is in just about every way.

Have you tried out Apex Legends? What’s your favourite cosmetic? Let us know on Facebook and Twitter @trustedreviews.