The Samsung Galaxy S10 is shaping up to be a seriously impressive 2019 smartphone. But how does it compare to the most feature-packed and technologically advanced phone of 2018, the Huawei Mate 20 Pro?

There’s a lot to talk about as we set these two titans head to head.

Samsung has been ploughing its own distinctive design furrow for several years now, and the Galaxy S10 steps things up to the next level.

You’re still getting a dual-curved display that all but does away with the concept of a side bezel. But this time Samsung has turned its attention to those top and bottom bezels, with the screen filling out to almost fill the front of the phone. 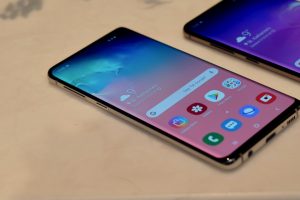 We thought the Huawei Mate 20 Pro’s 87.9% screen-to-body ratio was impressive when it showed up towards the end of 2018, but the Galaxy S10 trumps that with a 93.1% rating. One of the key ways Samsung has managed to pip its rival is through the application of a technique it calls ‘Infinity-O’. This sees the front camera marooned on a tiny island just off the top right corner of the S10.

Conversely, the Mate 20 Pro packs its front camera into a sizeable notch, very much like Apple’s iPhone XS family. It’s simply not as a elegant or efficient as Samsung’s approach.

Turn both phones over, however, and it’s a toss up which design is best. Both have glassy, curvy backs and blocky triple-camera modules – though Huawei’s is arranged in a square, while Samsung’s is stretched out in an oblong shape.

The Huawei Mate 20 Pro is a much bigger phone than the Samsung Galaxy S10. Indeed, its dimensions are quite similar to the Galaxy S10 Plus, though it’s 0.8mm thicker than both Samsung phones.

When the Huawei Mate 20 Pro hit the market, it did so with a level of feature-cramming, box-ticking showmanship that you suspect Samsung would have been proud of. Indeed, several of the Galaxy S10’s headline features were pre-empted by the Mate 20 Pro.

For example, the Mate 20 Pro packed in an in-display fingerprint sensor months before the Galaxy S10 showed up. That being said, the Samsung phone utilises a new ultrasonic variant, which is quicker and more secure than the Mate 20 Pro’s optical unit.

Conversely, the Huawei phone packs in a similar Face ID system to the iPhone X, so you technically don’t even need to make use of that fingerprint sensor if you don’t wish.

Similarly, Samsung’s announcement that the Galaxy S10 would be able to charge other devices wirelessly was robbed of a little of its sting by the fact that Mate 20 Pro got there first. What’s more, the Mate 20 Pro has a much larger battery (4200mAh vs 3400mAh), which might make it better suited to the task.

Related: What is Wireless Powershare?

Even the fact that the Galaxy S10 runs on a processor built to a smaller 7nm/8nm process (either the Snapdragon 855 or the Exynos 9820) was pre-empted by the Huawei Mate 20 Pro and its custom Kirin 980 CPU.

On that latter point, the Mate 20 Pro was the fastest Android phone of 2018. You can expect the Samsung Galaxy S10 to overtake it, judging by preliminary benchmark tests. It’s also worth noting that the Galaxy S10 only comes with 8GB of RAM, whereas there is a lesser 6GB option for the Mate 20 Pro.

When it comes to screen specs, it’s a tough one to call on paper. The Huawei Mate 20 Pro’s 6.39-inch display is slightly larger than the Galaxy S10’s 6.1-inch unit, while they have the same QHD+ resolution. They’re both AMOLED displays too, so there’s vibrant colours and deep blacks all round.

The parallels just keep coming as we consider the camera offerings of these two classy phones. Samsung is upping the stakes with a triple sensor approach in the Galaxy S10.

But Huawei got there first with the Mate 20 Pro’s own triple threat. Indeed, on paper the Leica-branded Mate 20 Pro camera catches the eye a little more, with a 40-megapixel main snapper and a 20-megapixel ultrawide sensor, backed by an 8-megapixel telephoto lens.

The S10’s triple set-up looks a little more even, with two 12-megapixel sensors (one being a telephoto) and a 16-megapixel ultrawide one. It’s also worth noting that Samsung has fitted the S10’s main camera with a variable aperture, which will be able to let loads of light in when conditions require it.

Samsung is playing catch-up on the camera front, as the Mate 20 Pro arguably took its place alongside the Pixel 3 at the top of the cameraphone tree in 2018. But who would bet against the Galaxy S10 making up the lost ground?

It’s fair to say that neither of these great manufacturers is particularly famed for their brilliant software. Both Samsung and Huawei have the habit of layering a fair amount of bloat on top of a perfectly decent Android experience.

Samsung at least appears to be refining its approach with the Galaxy S10 and its One UI, which is far cleaner and cleverer than before. Whether we’ll see Samsung upping the rate of its updates to a more timely schedule remains to be seen, however. 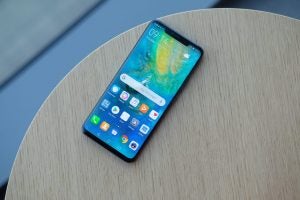 At any rate, Huawei’s EMUI is worse than Samsung’s recent efforts. There’s a slightly ‘knock-off iOS’ air to it and way too many half-baked duplicate apps.

The software is comfortably the worst part of the mate 20 Pro experience, and it could be the one area where the Galaxy S10 establishes a clear advantage.

The Huawei Mate 20 Pro hit shops in November 2018, and has dropped in price since that launch. You can currently get the entry-level 6GB RAM model for between £719 and £749 online. It seems to be a lot trickier to find the 8GB RAM model at present.

We’re dead excited about the Samsung Galaxy S10, but you could argue that we’d be even more excited if not for the existence of the Huawei Mate 20 Pro. While the latter stole some of the S10’s thunder, though, we’re still expecting a superior hardware and software experience from the newer phone. It’ll all come down to Samsung’s execution.