What is the FujiFilm X-Pro 3?

While Fujifilm hasn’t yet released full details about the retro camera – those will come later at its official announcement in late October 2019 – it did tease a few key details about its design, including a unique screen and improved hybrid viewfinder. 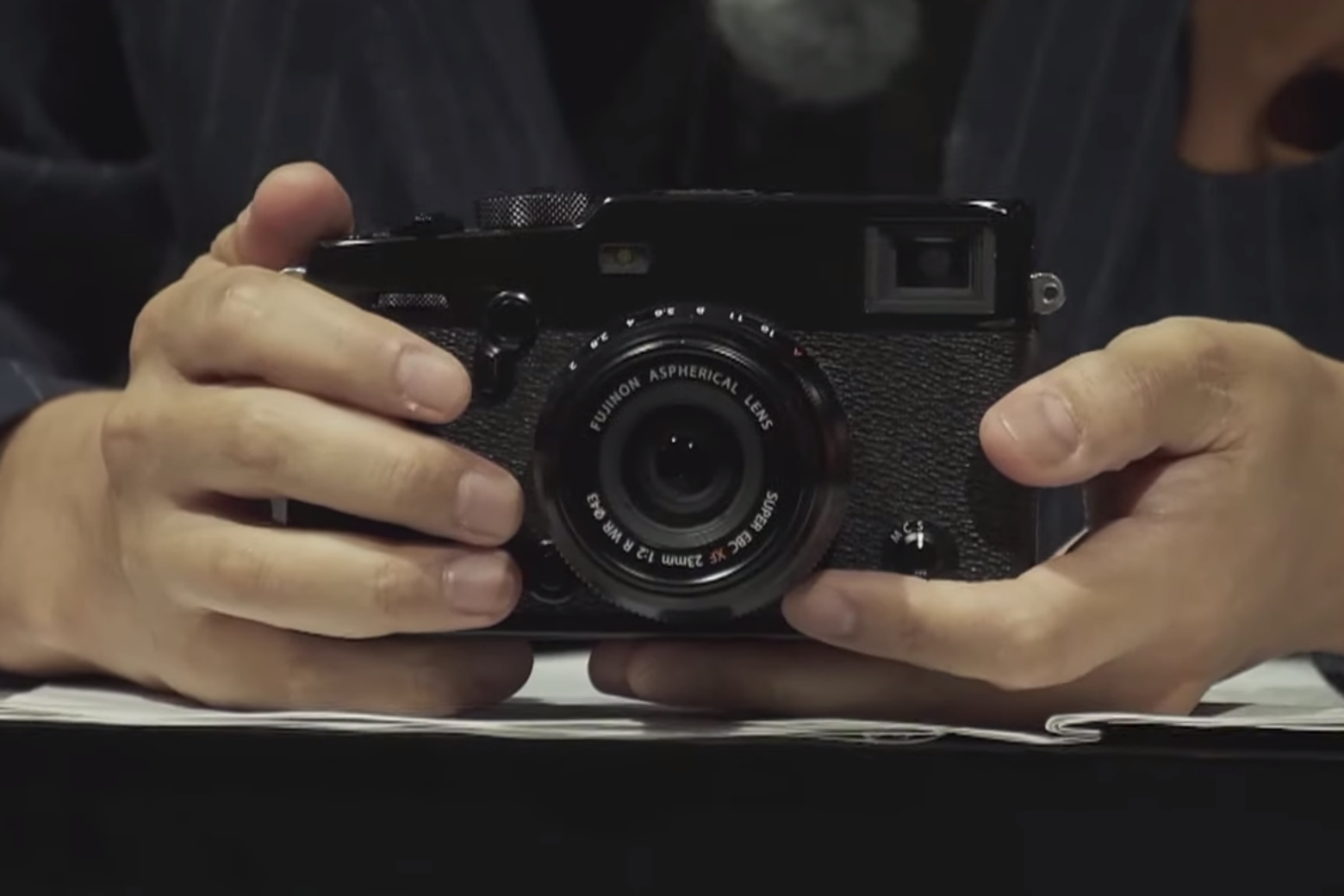 These create a clear separation between the X-Pro 3, which is aimed at pure film nostalgists and street photographers, and the Fujifilm X-T3, which is currently our favourite all-rounder APS-C camera.

In this round-up, we’ll look at all the details Fujifilm has officially previewed about the X-Pro 3, plus the rumours about the rest of its possible features.

FujiFilm X-Pro 3 price and release date: when will it be announced and how much will it cost?

Following persistent rumours about an October 2019 launch, Fujifilm has announced that the X-Pro 3 will be fully unveiled on 23rd October 2019.

While this will be the date when it fully reveals all the specs and features of the camera, we still don’t know exactly when it’ll be going on sale or how much it will cost.

It seems likely, though, that the X-Pro 3’s price tag will be similar to the launch price of its predecessor, which was £1,350 (body only), with the extra-tough versions (see below) perhaps costing a little more.

This would put it in the ballpark of the one-year-old Fujifilm X-T3 too, which currently costs £1,119 (body only) and is more of a stills-and-video all-rounder compared to the more retro X-Pro 3.

While the X-Pro 3’s full specs remain unclear, one thing that we are certain of following its unveiling at Fujifilm’s X Summit on 20 September is what the camera will look like. Which is to say, very similar to what many leaks predicted.

One slight surprise, though, is that it’ll be offered in three colours, two of which come with a special coating – these will be called Dura Black and Dura Silver. This coating will apparently make the camera ten times tougher than the previous stainless steel version against scratches, with a toughness approaching the level of sapphire.

In other words, it’s been built for hardcore street photography and wannabe Don McCullins. 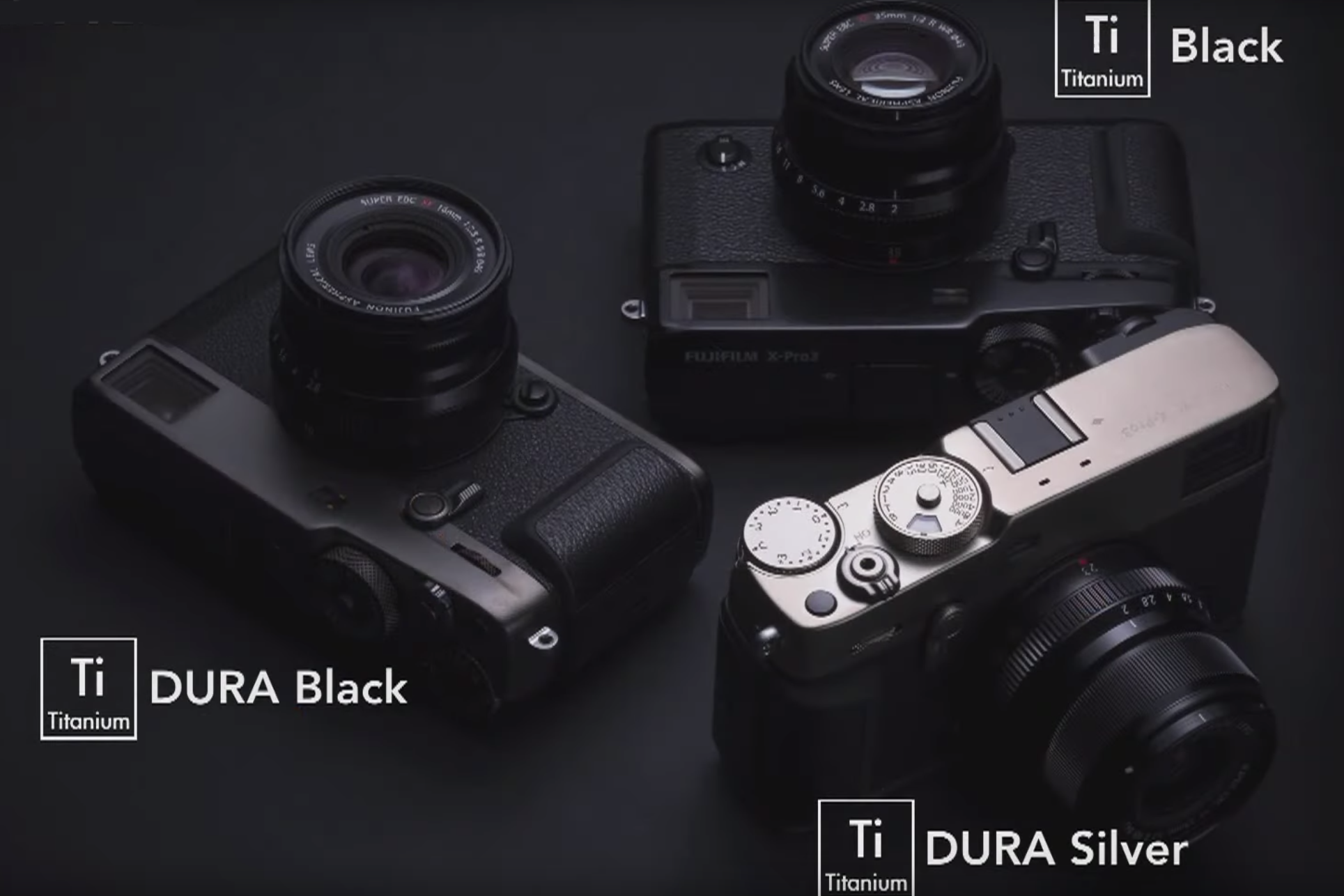 There are two other big design changes. Firstly, Fujfilm has upgraded the hybrid viewfinder, which offers the benefit of both optical and electronic variants.

In optical mode, the X-Pro 3’s viewfinder will apparently be more clear, have less distortion, and will have a larger angle of view. Switch to electronic, and you’ll find a host of upgrades, including higher resolution, higher contrast, a wider colour space than the X-Pro 2 and X-T3, and a higher frame rate. We’ll have to wait until October 23rd to find out exactly what these will be. The most interesting, and perhaps polarising, change though is round the back of the camera. Gone are the D-pad and 3-inch LCD, which are apparently too modern for the super-retro X-Pro 3. Instead, you get a two-sided, ‘hidden LCD’.

On one one side this has a small screen that’s very much like the top LCD on many pro cameras, showing shooting info like your shutter speed, aperture, exposure compensation and ISO settings.

Here you’ll also get some very charming digital previews of the film simulation you’re using, including the newly announced Classic Negative. These will even be visible when the camera’s turned off, which is a lovely nod to film cameras. 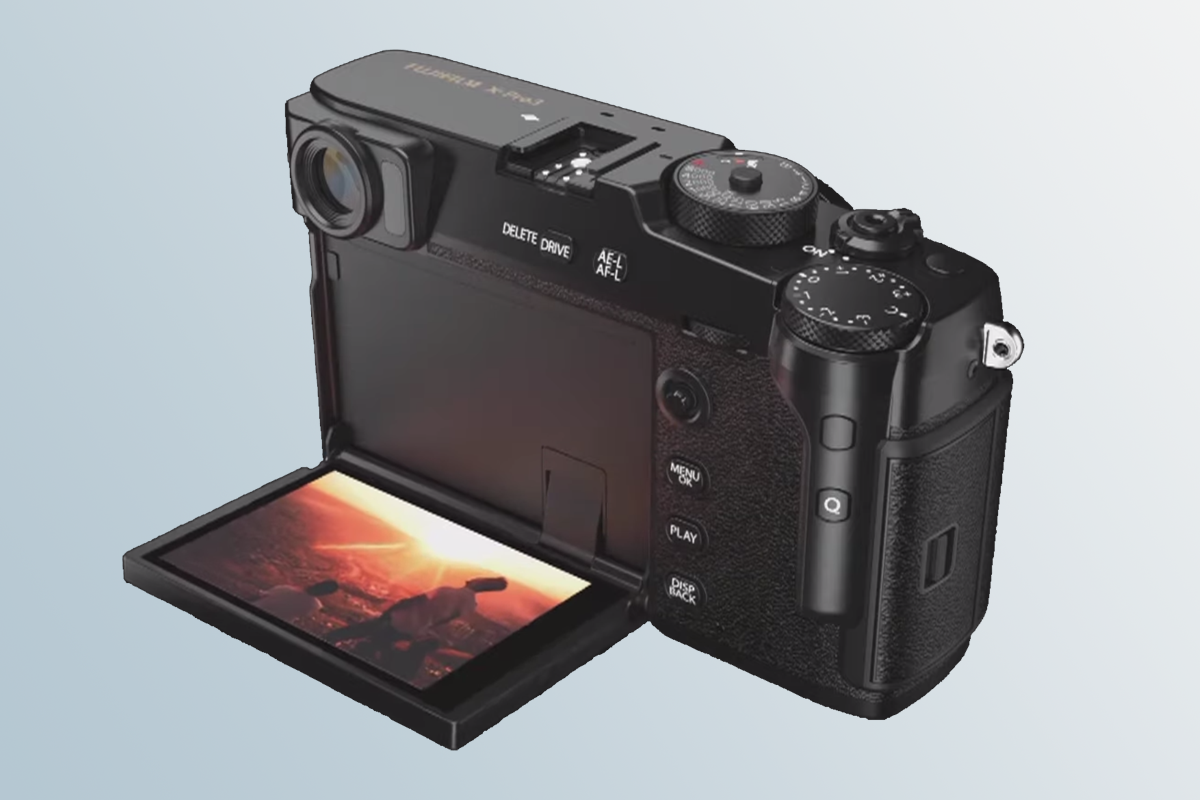 Flip that screen down, though, and you’ll find a more conventional LCD for previewing your photos or shooting at waist level. The idea behind this slightly eccentric setup is that it’ll encourage you to spend more time looking through the viewfinder and taking shots than reflecting on your compositions, in much the same way as old film cameras or the screenless Leica M-D. It certainly creates a clear separation between the X-Pro 3 and less restrictive, but less characterful, Fujifilm X-T3.

The X-Pro 3 otherwise appears to have a similar design ethos to its predecessor. Like the X-Pro 2, it’ll be wider than the X-T3, but not quite as tall. And marginally thinner. We’ll find it if there are any more changes at its official release on October 23rd 2019.

FujiFilm X-Pro 3 features: what sensor and specs will it have?

Despite showing off the X-Pro 3’s design in detail at its X Summit event, Fujifilm didn’t reveal a huge amount more about its specs. So while we wait for that official announcement, here’s a rundown of the most interesting rumoured features on the X-Pro 3:

Japanese camera blog Nokishita Camera noticed that a new Fuji camera had been registered at the bluetooth.com Launch Studio in early June 2019. Products going through Bluetooth certification appear on this site.

Fuji’s X-T30 appeared there just over a month before its launch, and the X-T3 three months before its debut. It offers no clues to the exact launch window, but does suggest there’s plenty of time for an October 2019 release.

The listing does imply that the FujiFilm X-Pro 3 has Bluetooth connectivity, using version 4.2. Just like the X-T3 Bluetooth, it will likely let you transfer images to your phone without using much battery power. IBIS, or in-body image stabilisation, is the most interesting X-Pro 3 rumour, if also the least credible – particularly as this wasn’t mentioned during its development announcement at X Summit. Fuji Addict reported about claimed leaked camera specs on Chinese social networking site Weibo, and they included stabilisation.

To date, only the Fujifilm X-H1 has offered in-body stabilisation, among mirrorless Fujifilms. The lack of it is one of the main reasons to buy, for example, a Sony A6500 instead. Lenses like the brilliant Fujifilm 35mm f/1.4 do not have OIS so the shutter speeds you can reliably use handheld are limited.

Fujifilm has said it has not found a way to build IBIS into cameras like the X-T3. The X-H1 is significantly larger as a result of having IBIS. As great an addition as stabilisation would be for the X-Pro 3, it seems highly unlikely this will be included in its design. 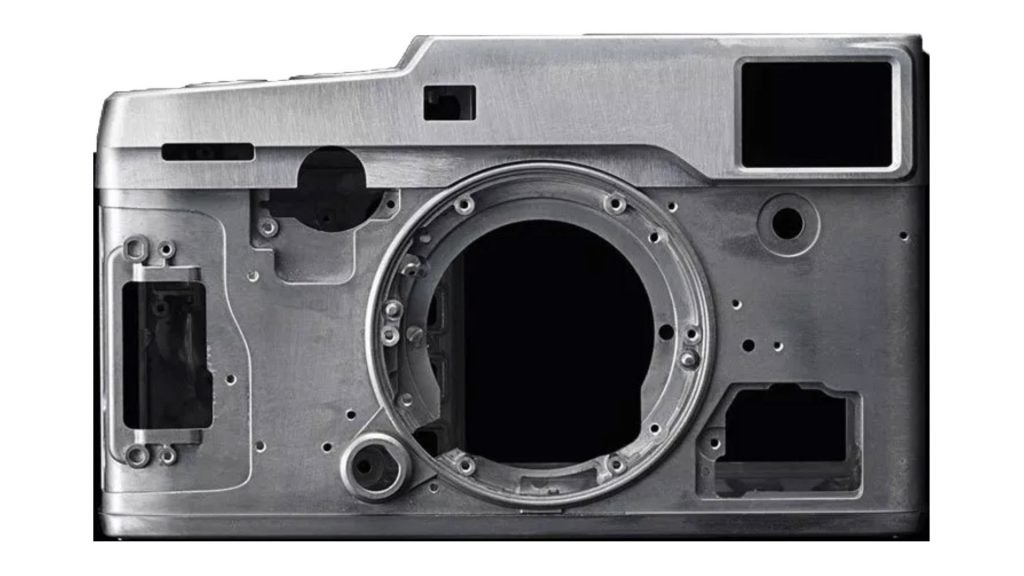 Fujifilm has a generational approach to sensors. The X-Pro 2 has an X-Trans III 24-megapixel APS-C sensor. Given its October 2019 release date, the X-Pro 3 will most likely have the same X-Trans IV 26-megapixel sensor as the X-T3.

Higher sensor resolution at the same size class will mean the X-Pro 3 has smaller sensor pixels. But you can expect similar image quality between generations.

Fujifilm may fiddle with extended ISO modes to signpost an improvement in hardware, but X-T2 vs X-T3 comparisons suggest there’s not a huge stills quality difference between them.

The newer tech should add one very important feature to the X-Pro 3, though: 4K video at 60fps. An X-Pro 2 lets you shoot at 30fps, but not the full 60fps Fujifilm added to cameras like the X-T3.

AF improvements are likely to be the most significant for stills, if in-body stabilisation does not pan out. The X-Pro 2’s focusing has actually improved since launch. A firmware update took it from 71 selectable phase detection points to 91.

But the fourth-generation X-Trans sensor provisions for phase detection across the whole of the frame. Its point-AF offers 425 focus points, or up to 117 in the zone AD mode. Something similar is likely in the X-Pro 3.

The X-Pro 3 is shaping up to be a bold, and also necessary, move from Fujifilm. Its ‘hidden LCD’ design will polarise opinion, but it creates some clear space between this super-retro camera for film lovers and the more crowd-pleasing, but less characterful, X-T3.

Its predecessor already dripped in charm, and this update pushes it more towards a more niche, Leica-esque territory (if hopefully without the equivalent price tag). 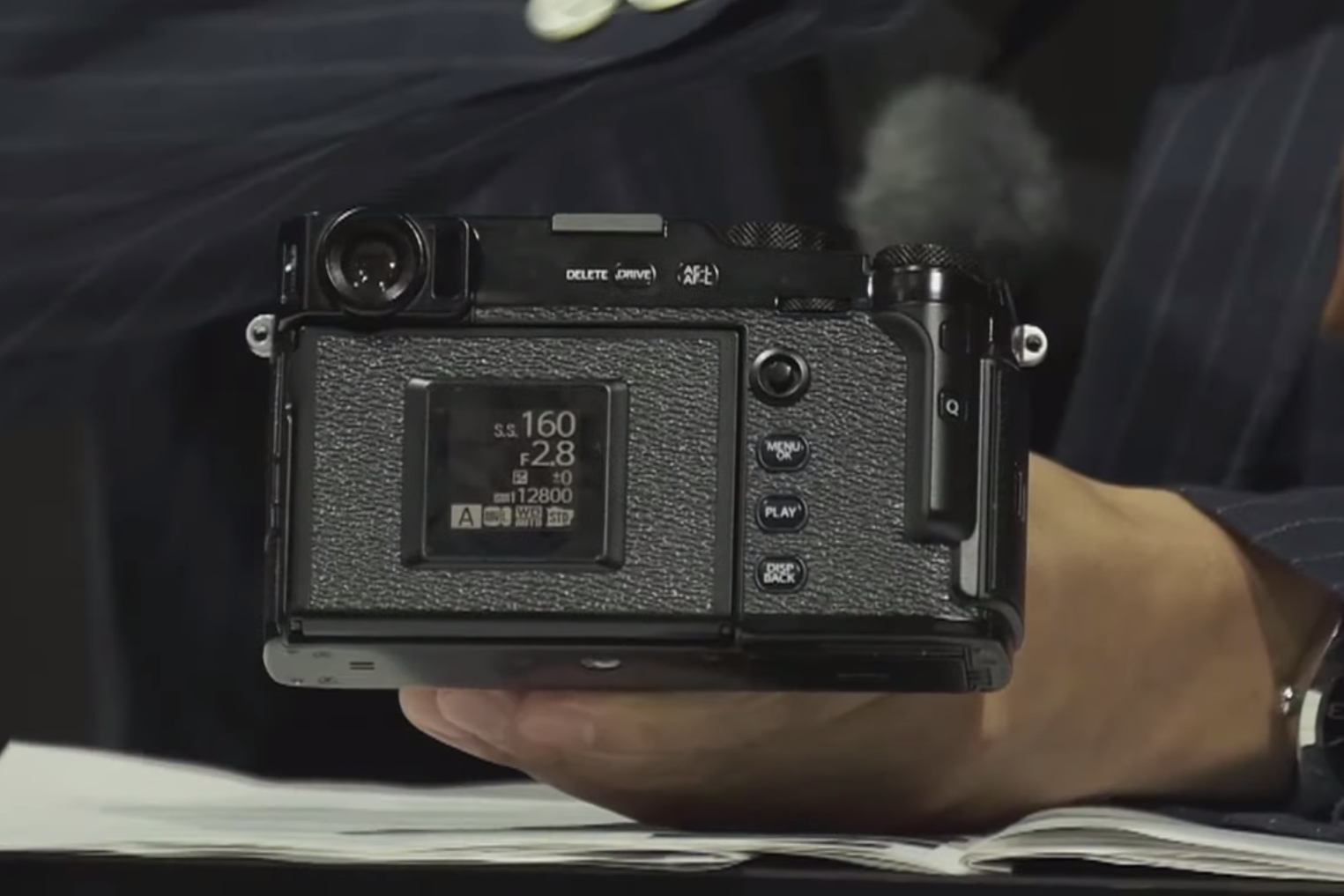 If, as we expect, Fujifilm adds features like a new sensor and 4K video to these design changes, then we could be looking at another super-retro classic for street photographers that sits in a unique place away from the more mainstream Fujifilm X-T3 and Sony A6600.

We’ll need to wait until October 23rd 2019 for all of the official details, but check back on this page in run-up to that launch for any more inevitable leaks about its full specs sheet.