Tyson Fury vs Deontay Wilder isn’t the only high-profile rematch on the cards tonight. Brad Foster is putting his British and Commonwealth super bantamweight belts on the line once again against Londoner Lucien Reid after the pair fought to a draw in 2019. Our guide tells you everything you need to know to tune in, enjoy the action and watch Foster vs Reid wherever you are.

There’s a stacked undercard too, with several stand out talents appearing. We’ll provide all the info you need on the fights, broadcasters and timings. You can even watch some of the action for free.

Thanks to a recently struck deal between ITV and BT Sport, you can tune in on BT Sport or ITV 1.

However, if you want to watch the whole event, you have to go through BT’s paid channel, as ITV is only due to start broadcasting from 10:15pm GMT.

Meanwhile, BT Sport will start its broadcast at 8pm GMT, showing as much of the undercard as possible.

If you’re a BT Sport customer already you can stream the fight on the BT Sport app.

US-based viewers can stream the fight live on ESPN+. Currently there is a 7-day free trial available of this service. Expect the broadcast to start around 3pm ET, which is 12pm PT. 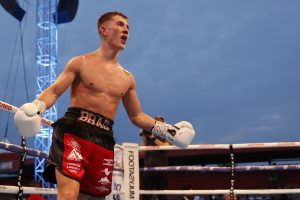 How to live stream the fight wherever you are

26-year-old Lucien Reid is looking to go one better than last year’s draw against Brad Foster. With two belts on the line, the stakes are high. Reid is undefeated, with eight wins and two draws to his name, he’s stopped four of his opponents.

Foster’s record is not dissimilar, with eleven wins, four stoppages and two draws to his name. He too is undefeated.

There’s little to split the pair on paper, but Foster has more high-profile wins, having gotten the best of Josh Wale to claim the British in the first place.

Reid was the only man to be giving a winning score card in the first fight. Two scored the fight a 114-114 draw, with the other giving it 116-112 to Reid. This obviously resulted in a majority draw.

The fight is on a knife edge and it’s well worth tuning in. Will Brad Foster be able to make the most of his superior experience? Or will Reid build on the one winning card he took last time?

The highlight of the undercard is the super middleweight British title eliminator between Welshman Kody Davies, and Canning-Town trained Nigerian, Umar Sadiq.

Davies beat Zak Chelli last time out and Chelli, in turn, is the one loss on Umar Sadiq’s record. So, for Sadiq, there is a measure of redemption in the win, should he succeed on Saturday night.

There is a genuine animosity between the two that was shown in spades at the press conference. Sadiq told the press that he believed this was caused by Davies struggling to make the super middleweight limit, having formerly fought as a light heavyweight.

Davies has the more high-profile wins on his record, but Sadiq looks to have come one leaps and bounds since his early career loss to Chelli. This is anyone’s fight and could even steal the show.

Also among the notable talents appearing on the card, Dennis McCann goes into his sixth contest after making a bright start to his career so far. He’s stopped four of his five opponents so expect fireworks from Denace ‘The Menace’.

Former British Olympian Muhammad Ali makes his professional debut for Frank Warren. His opponent, Stefan Sashev, looks hand picked to bag Ali a debut stoppage, but has sprung a notable upset before against Brandon Ball. Ali will be able to take confidence from a win then, should he overcome the Bulgarian as expected.

Ryan ‘The Piranha’ Garner, Louie Lynn and Willy Hutchinson have all attracted attention in their fledgling careers and are worth looking out for too. This could be a great card for boxing fans. 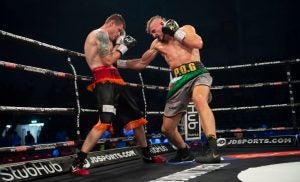