It’s season 6 week 8, which means there are but three more weeks to go until the Fortnite’s sixth season comes to an end. This week has a couple of slightly awkward goals, but also favours big team battle modes. Meaning if you’re looking for a fairly straightforward week in terms of challenges, this is the week you’ve been waiting for.

The safest bet for any ‘land at two areas’ is to play a big team mode, like 50v50, Disco Domination, or Food Fight depending on what’s available. That way, you still have access to the glider redeploy function and don’t need to worry as much about getting shot as you head to the next area. All you need to do is land, get the pop up, then build up and glider to, or as close to the next area as possible. 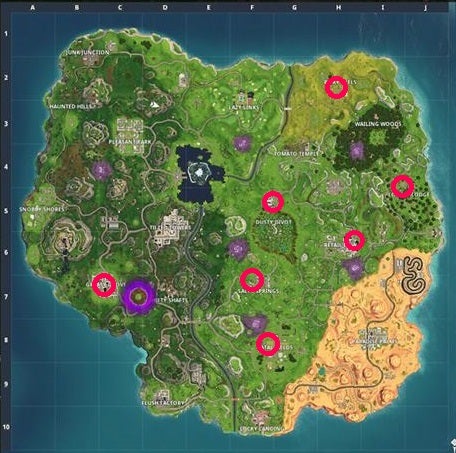 You know those novelty fish taxidermy that hang on the wall and play music and move? Yeah, you’ll be looking for them. Seven to be exact. Just head to the following locations and dance your booty off to complete this challenge.

The six shooter is great at close range thanks to its fire from the hip mechanic. Although saying that, it’ll be much easier to get kills with the heavy if you’re stronger at range.

Aim to pick off people who haven’t spotted you, or if you get into a gunfight, build a little fort and take pot shots. The heavy AR has solid headshot damage, so taking people down only requires a few bullets. Also, big team battles, with respawning on, will make this a lot easier. Fortnite Season 6 Week 8: Get a score of 3 on different Clay Pigeon Shooters 0/3 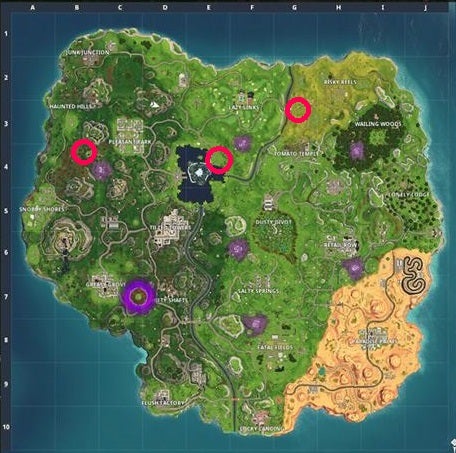 Thankfully for this you’ll only need to complete three of the clay pigeon shooting minigames. Keep in mind when you approach them, you’ll need to find a weapon first. Don’t jump straight from the bus to the zone unless you’ve got some mad pickaxe skills.

It’s also best to go with a shotgun if you can as the pigeons are so brittle, even a tactical shotgun can blast them to shreds from a mile away. Plus as the shotgun has the widest spread, your chances of hitting them go way, way up.

The only vehicle you need to care about for this one is the quadcrasher. The boost it has means you can get some serious hang-time, allowing the chance to pull off spins, flips, and also reposition yourself for a safe landing. There are also several ramps around the map if you want an even greater hang-time.

While this is achievable through solo, duo, or squads, it’ll be much harder fighting from one area to the next as the storm closes in. Instead, and at the risk of repeating ourselves several times over, head into a big team mode.

In 50v50 you have an entire half a map mostly to yourself, so grabbing an ATK or quadcrasher and cruising between four different areas shouldn’t prove too difficult.

Grab a grappling hook then fire it at, well, anything. This seems a little too easy…

Whether you’re looking to unlock the AIM skin, get the final Calamity weekly challenge needed for the new colours, or fully upgrade Dire, feel free to head on over to any of our previous Fortnite weekly challenge guides.