New event, new unlockables. The new Fortnitemares event has a rather ample four unlockable items, which includes an emoticon, a spray, a trail, and a rather nifty glider. But how do you go about unlocking each of the spooky new unlocks just in time for Halloween? Trusted Reviews is here to help with a quick and easy walkthrough.

You’ve got two options here. The first is land at the floating island, where you’ll find large cube fragments, which in turn spawn cube monsters. The second option, just play the game. Small cube fragments spawn randomly so the chances of running into cube monsters just through play is going to be very high. Just make sure you arm yourself with the weapons you’re best with and let rip when you see their ugly faces.

Deal damage with Assault Rifles or Pistols to Cube Monsters 0/5,000

While that seems like a lot of damage, it’s not too terrible. It’s just going to take a while. Getting a rocket launcher and firing into a group of monsters will help make this quicker, but you can’t always find a rocket launcher. The best bet would be 50v50 and drive around the map farming the cube fragments. Shoot at the fragment a couple of times to spawn enemies, kill them, then repeat until the fragment is destroyed. Then it’s just a case of driving around until you find another one and starting again.

This should be easy enough, and thankfully it’s not visit seven in one match. You can either land at a corrupted zone, or if it’s too hot, grab a quadcrasher and mosey on down later in the match.

Dance in front of Gargoyles 0/5 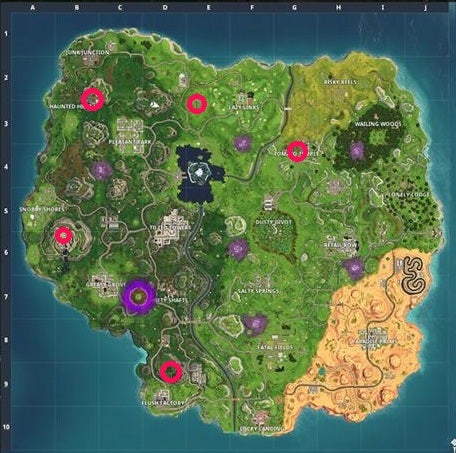 As always we’ve got a handy map and a few pointers to let you know where the easiest gargoyles are to find.

This one’s a bit tricky to get to. Head to the Haunted Castle as you normally would. Enter into the main courtyard area, mine down through the floor, and your gargoyle will be attached to a small pillar in the centre of the room. You can go around the outside and follow the steps down if you like, but for speed, mining is quicker.

You’ll find this gargoyle at the centre of Tomato Temple surrounded by four broken, small walls.

You know the Viking area south-east of Snobby Shores? Head there. In the larger house at the back-left you’ll find a gargoyle waiting for you. 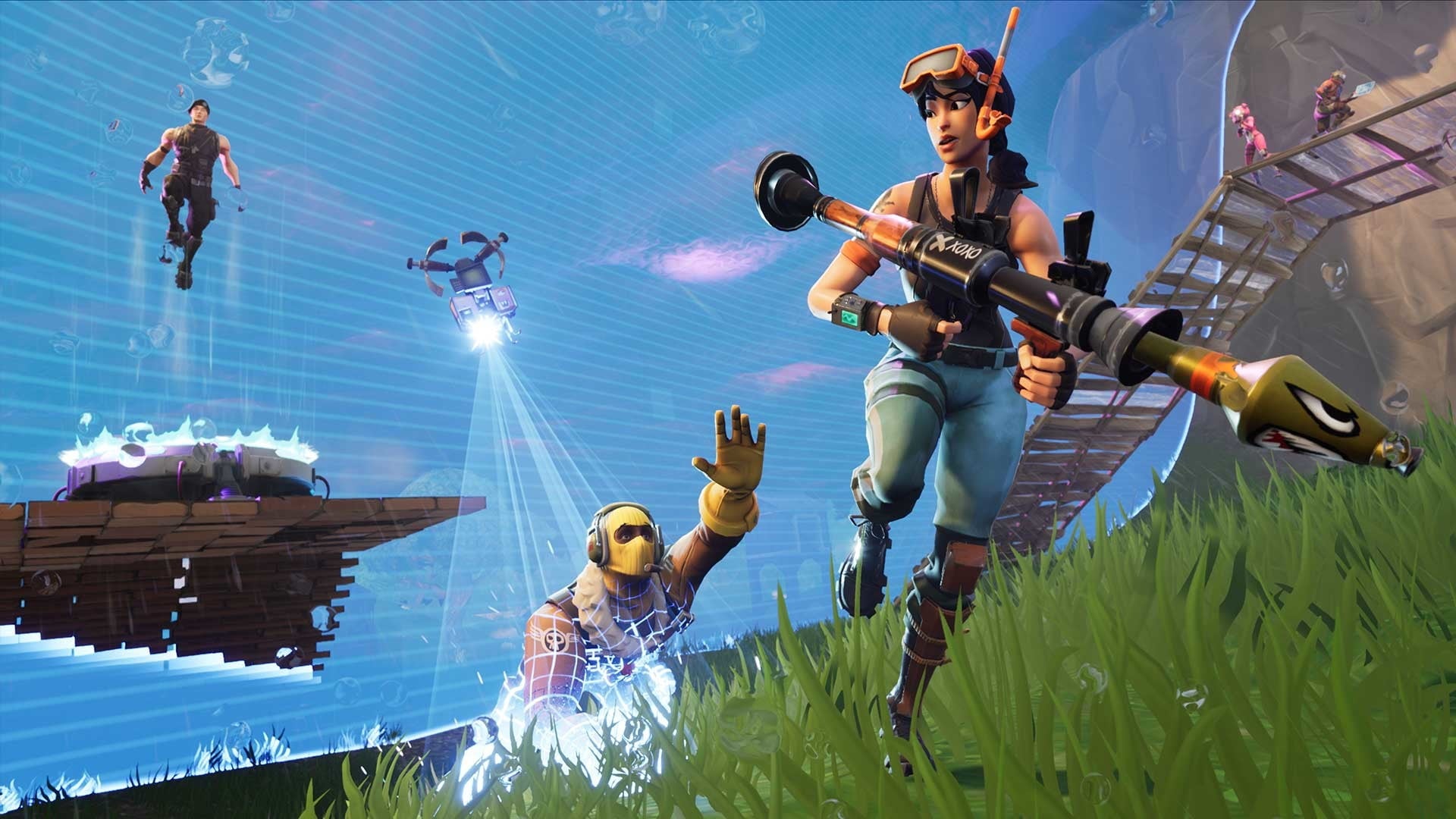 To the west of Lazy Links, and south from the motel, is a crack in the ground. Once you get there it’s hard to miss, so just head to the location and you’ll be able to see it. Drop into the mini canyon and follow it down to the wooden mining area. Inside is your gargoyle and a chance at a chest spawn.

Look to Flush Factory then aim for the mountain just a tad north. At the summit, in front of a rock with a hanging lamp and a bin next to it, is your final gargoyle.

Here’s a nice and simple challenge to kick off Part 2. Feel free to use whichever weapon you prefer and this will fly by in a few matches. For ease, we recommend using the minigun with a healthy amount of ammo. As soon as a new wave spawns, spray bullets everywhere, loot any ammo the monsters drop, then repeat. Easy stuff.

Deal damage with Shotguns or SMGs to Cube Monsters 0/5000

Don’t worry, 5000 isn’t that much when you have four-to-five enemies spawning every few seconds. If you’re going the shotgun route, aim for the tactical shotgun or the heavy due to their superior firerate. Whereas if you opt for SMGs, the standard SMGs have the best clip size, which comes in useful when shooting down multiple enemies at once.

There’s a chest challenge coming in part 3, which we can complete at the same time as this one. Other people will be going to the corrupted zones, so rather than looting up elsewhere and then charging over to a zone, head to the corrupted area straight away. If you grab the chest first, chances are you’ll be able to spin around and gun down other players with the same idea.

Head to a named area, preferably with houses to get you started, and shoot or smack some ghost decorations. 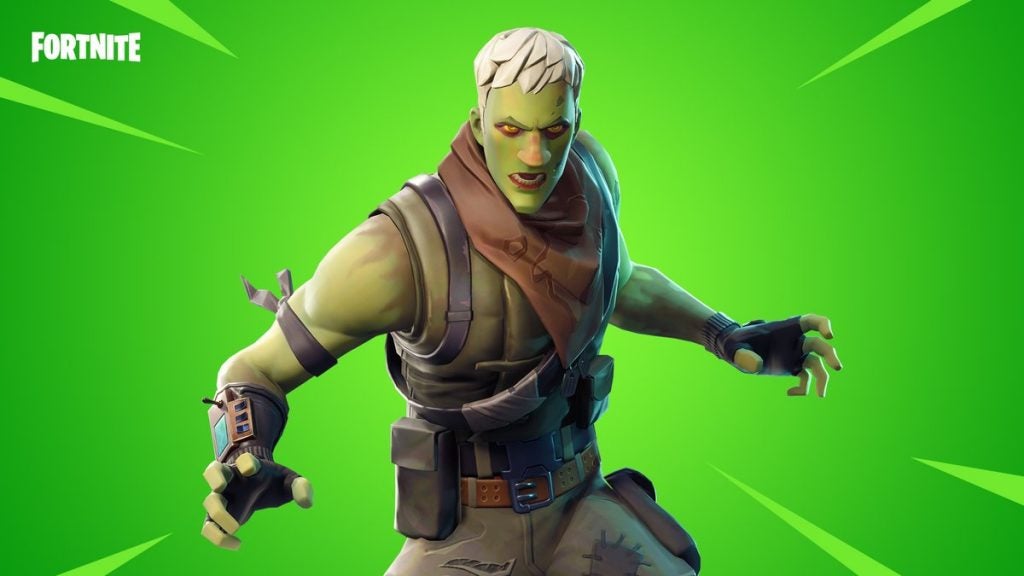 While brutes do take a little bit longer to drop compared to the normal cube fiends, it’s not enough for them to prove challenging. So long as you keep them at range, and don’t let them get within thwacking distance, you’ll be fine.

Only use the grenade launcher for this challenge if there’s nothing else about. It’s not exactly the most accurate weapon in the game, eh? If you can, try to grab a rocket launcher. Then, group up the enemies and let rip into the middle of them and watch as a sea of damage numbers float off their lifeless bodies.

As we previously mentioned, the key here is landing first. Jump early, fly low, and you should arrive before other players. It’s also worth keeping in mind sometimes a chest spawns around the back of the cube fragment, so be sure to check there before you leave. You should be able to net between two and three chests per zone with minimal fuss.

Another easy one to finish this set on. Land Wailing Woods first, then in the next match head over to Fatal, before finally, in another different match, land at Haunted Hills. 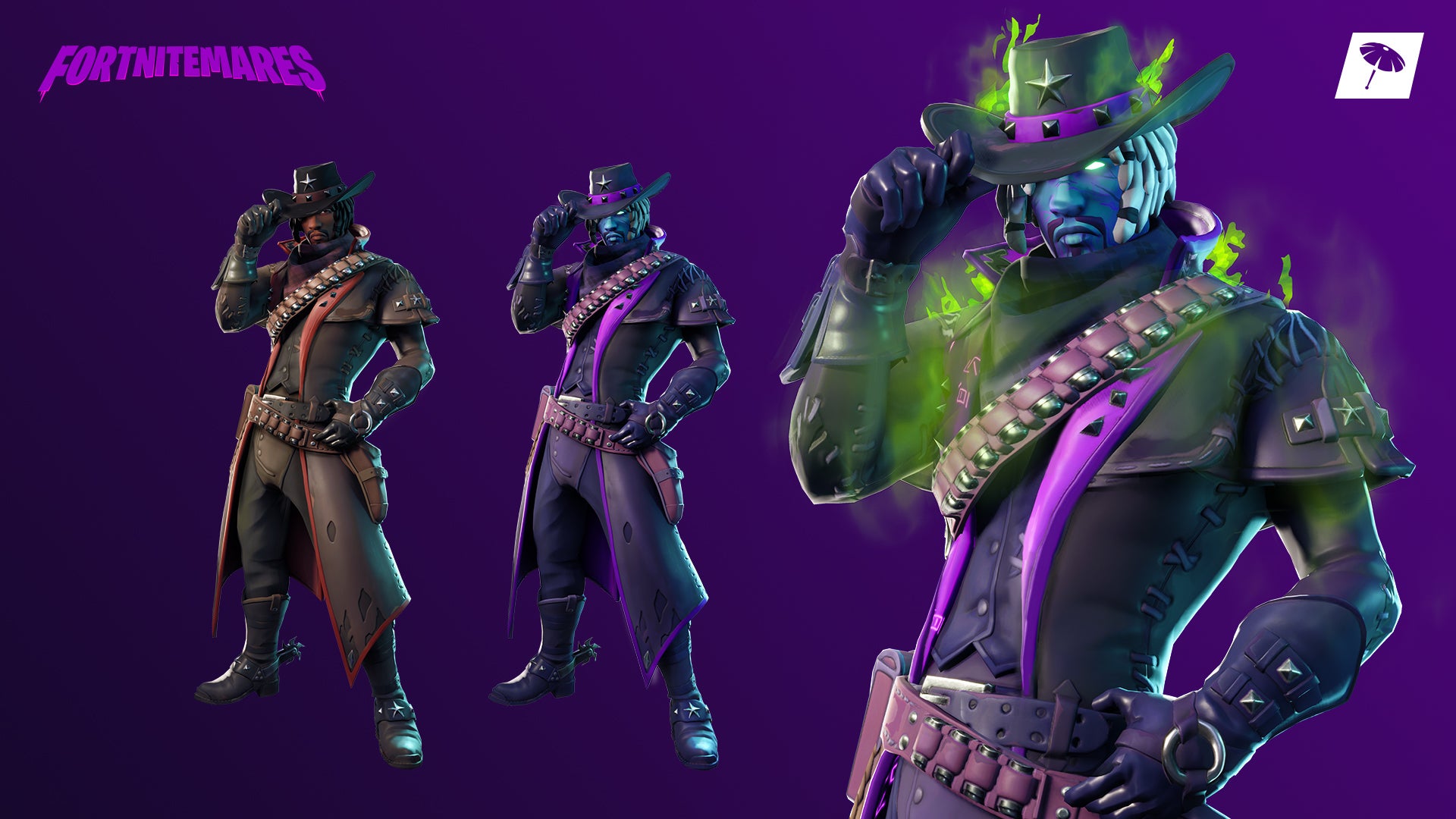 As with the brutes, these guys take a few extra bullets to drop. What you’re looking for is the glowing enemies, which look similar to the bog-standard skinny cube fiends but, as we said, glow.

Again, don’t let the number fool you. Just head from corrupted zone to corrupted zone blasting or pickaxing the cube spikes. They take longer to destroy than your average enemy so if you can rope in a squad to help you out this’ll get done much quicker.

Deal Damage to Cube Monsters in a single match 0/1000

Again, again, it’s not a massive amount. Two rockets into a group of fiends will complete this challenge, as will several well-placed headshots with a sniper or shotgun. If you can’t get it done at one zone, just head to another in the same match and the progress will carry over.

Right. Okay. Normally these challenges are a ballache, but, thanks to the introduction of the quadcrasher, they’re now a cakewalk. Drop in Salty Springs and by the gas station is a trailer with quadcrashers on the back. Grab one, then head to the corrupted zone north of salty, then to the south, then head east towards the zone by Paradise Palms. With just the one zone left, head north to the area by Wailing Woods to complete this challenge.

Should you happen to run into any enemies, just use the quadcrasher’s boost ability to zip away in a flash.

If you’re doing all the challenges in one go, this should double up with the damage cube fragments challenge. As you can imagine, this is another fairly straightforward affair. Head to a zone, smash the fragment and repeat two more times. That’s it.

And to finish up everything, complete 14 of the Fortnitemares challenges. Part 3 is full of easy challenges, as is Part 4. As for Part 1 and Part 2, you can ignore the staged challenges that require you to complete several stages over different matches and instead opt for anything to do with damage or kill. Chances are, however, by the time you have to think about this challenge, you’ll already have it completed.

Once you’ve got all of the above completed, maybe it’s time to revisit the main Battle Pass challenges? If you need any help with any of the previous weekly challenges, or if there’s anything you’ve missed from Season 6, we’ve got a whole guide section for all your Fortnite needs.