Short-form content is the new trend in streaming, with 11% of upcoming video on demand commissions being episodes less than 20 minutes long, according to fresh research.

Already making up 9% of all Video-on-Demand (VoD) series globally, 11% of upcoming VoD commissions are short-form, according to data from Ampere Analysis. It’s a trend that first started with comedy, but now there are short-form offerings in the reality, entertainment and documentary genres.

A 20-minute short comedy is pretty much the polar opposite to the most-talked-about Netflix feature of the moment, The Irishman. The Scorsese gangster epic is three and a half hours long, but are Netflix barking up the wrong tree in commissioning such huge feature films?

Not yet, it seems, but if the trend towards short-form content keeps rolling on, streaming platforms may have to re-assess their commissioning priorities.

Olivia Deane, from Ampere Analysis, said: “Short-form content is growing strongly, and we expect to see it boom – both in English speaking markets and Asia where it’s well-established. Attractive to large and small players alike, short-form offers the opportunity to experiment with high production values at a smaller scale. 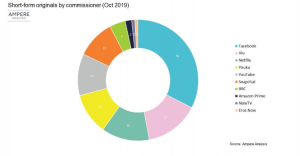 Stats and discussion from market analysts, Ampere Analysis, shows that social media channels still lead the way on short-form content. However, entertainment streaming platforms are getting involved too. The BBC, Netflix, Channel 4 and others are all increasing their commissioning of short-form videos.

One of the biggest differences between short-form content and traditional episodes or films is the likelihood of it being unscripted. The graph below shows the top five short-form commissioning platforms, Quibi, Snapchat, Facebook, Zomato and Disney Plus, as well as showing that the majority of their output is unscripted content. 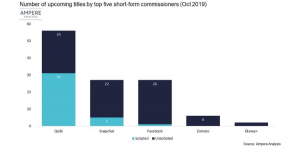 Channel 4 has planned a £1m investment in new short form content and doubled their spend on their ‘Comedy Blaps’ programme, which is essentially an experimental proving ground for new comedy. Short form ideas that could be scaled into full shows are invited, in an attempt to find fresh comedic ideas and new talent. The BBC has launched their own entries, with short form comedy like Lazy Susan and Sorry. Both are available on iPlayer.

Deane commented: “Newcomer Quibi, only producing short-form content, is already the largest commissioner of bite-size television. Quibi, along with other smaller niche platforms, has an exciting opportunity to chase the existing audiences of streaming giants like Netflix and Amazon. This is a market the mainstream broadcasters don’t want to miss out on, and both Channel 4 and the BBC are making forays into the world of short-form shows.”

We have to look beyond the UK to see this biggest growth in sub-twenty-minute entertainment. It’s Asia that is primarily driving the popularity of short-form content. Almost one third (31%) of all existing short-form originals come from South Korea, Japan, Hong Kong or China.

Can these under-twenty-minute shows really capture our imaginations in the same way that huge feature films do? Perhaps not, but they seem to represent an effort from entertainment providers to offer a halfway house between super-short social media videos and full half-hour TV episodes. This, in turn, is an attempt to move the content they produce, closer to the content ideals of young people. Social media and streaming have left content producers in a period of flux, constantly questioning the best ways to attract audiences. Short form video is the latest attempt at an answer.