Fitbit Versa vs Fitbit Ionic: Now that Fitbit has announced a cheaper, entry-level smartwatch, you might be wondering which deserves a place on your wrist.

The Fitbit Versa is very much the company’s attempt to broaden the appeal of its smartwatches, offering a more universally appealing design at a lower price. But is it still worth stretching to the more expensive Fitbit Ionic? Let’s find out.

Design is going to be one of the biggest differences between these two wearables. The Fitbit Ionic, which was Fitbit’s first official smartwatch, has a rather divisive design.

It’s notably boxy and squared off, like a retro CRT TV strapped to your wrist. I think most will agree it’s quite a masculine design. While Fitbit has largely been creating fitness trackers that can go seamlessly from the gym to an evening out, the Fitbit Ionic was more difficult to style up.

Enter the Versa, which has a more unisex design. It looks very much like a smartwatch from Pebble, a company Fitbit acquired for its software. The edges and corners of this model are rounder, and it’s smaller and lighter overall. The Versa won’t stand out on your wrist as much as the Ionic.

Both devices offer excellent displays that can reach up to 1000 nits in brightness. You’ll have no problem viewing either device outdoors, with both smartwatches displaying crisp and colourful screens.

Both watches use three hardware buttons on the sides alongside the touchscreen for navigating the menus.

The Versa and Ionic have a similar array of sensors inside, save for one omission. The Versa lacks integrated GPS, meaning your phone will have to accompany you for outdoor workouts where you want to track route and distance. The Ionic offers a phone-free experience, in this regard.

Elsewhere, both devices feature an accelerometer  to track steps and movement, and a heart rate monitor on the rear to keep tabs on your heart. There’s also the relative SpO2 sensor to track blood oxygen, but neither device actually makes use of this feature just yet.

Fitbit Pay is available on both wearables, but check if your bank supports the contactless payment feature since so far it’s been lacking.

There’s onboard storage for music on both devices, with support for Bluetooth headphones. If you subscribe to Deezer then you can save music offline as well as transferring your own music files to the watch.

The experience across both devices is similar. Both wearables are water-resistant to 50 metres and include swim tracking. The Versa also supports the same automatic exercise tracking for which Fitbit is known.

Fitbit is also introducing female health tracking features to its app. This functionality will be available to all Fitbit users through the app, but Versa and Ionic owners will get a unique in-watch experience.

The main difference, as mentioned above, is the lack of GPS in the Versa. So if you want a map of your running route as well as more accurate data about distance and pace, you’ll need to bring your phone along to use the Versa’s Connected GPS function.

Both devices support Fitbit Coach, which delivers workouts you can follow from your wrist, with more available through a subscription.

Fitbit has made improvements to the way that data captured is presented, and both devices will now be able to display trends regarding your resting heart rate and step count direct from the watch interface. That’s a welcome upgrade for data fans.

Both devices run Fitbit OS and support apps and watch faces from the Fitbit app store. As such, the experience with both devices will be identical. Namely, there aren’t really enough apps available just yet. Hopefully, this will change in the non-too-distant future.

You’ll get the same smartphone notification mirroring experience on both devices, and both will let you now quickly reply to incoming messages but only if you’re an Android user. Supposedly iPhone support is coming in the future.

Fitbit’s trackers have always been known for battery longevity and, thankfully, this hasn’t changed for its smartwatches. Both the Versa and Ionic offer 4+ days of battery life.

Fitbit Versa vs Fitbit Ionic – Which is better value for money?

The Versa will launch in the UK for £199; the Fitbit Ionic has an RRP of £299. The Versa therefore represents a decent saving for anyone willing to sacrifice GPS. However, there are retailers out there selling the Ionic for £249, making it a tougher decision.

On the one hand, you won’t be paying that much more for the Fitbit Ionic, with its built-in GPS a handy option for runners. However, when it comes to design, the Versa is far more attractive. Which you opt for will be down to your priorities. 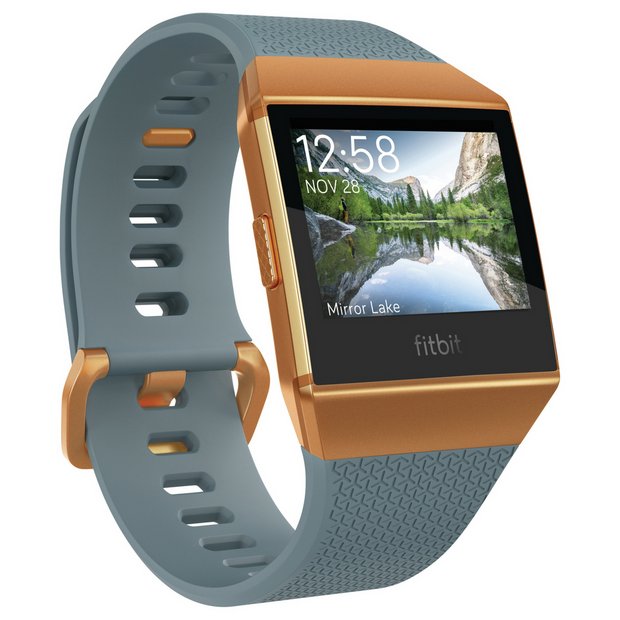 Design: The Versa offers a more universally appealing design; most people are likely to prefer its looks over those of the Ionic. Both have the same 1000 nits display, which is excellent.

Specs: The Versa sacrifices its built-in GPS in order to hit a lower cost. Dedicated runners will miss this feature. Otherwise, the specs are largely the same.

Apps and smartwatch functionality: It’s a draw here, too. You’ll get exactly the same experience across both devices.

Battery life: Another tie. You can expect 4+ days of battery life from both.

Price: The Versa is cheaper at £199; the Ionic is widely available at £249. You’ll have to decide if you want to sacrifice GPS for a more attractive design and lower price.