Fitbit Ionic vs Apple Watch Series 2: Fitbit’s new flagship fitness smartwatch takes on the Apple Watch in the ultimate wearable showdown. Our guide gives you everything you need to know when buying your next wearable.

The Apple Watch Series 2 fixed many of the shortcomings many had with the first generation device, and much of this was done by bolstering its fitness credentials. By adding in GPS and water-resistance, its position as a workout companion gave the device far more purpose than the original. That’s why we’re focusing on the Apple Watch Series 2 in this showdown.

Fitbit, on the other hand, is a company that has long had the fitness side nailed down, but with recent acquisitions of Pebble and Vector it looks to now add some smartwatch smarts, essentially meeting the current wearables trend from the other direction.

First off, the Apple Watch is a companion to an Apple iPhone, as such it’s not an option unless you have an iPhone. There’s no such compatibility issues for the Fitbit Ionic, which will work with both Android and iOS devices through its companion app.

Any wearable worth its weight needs to have a combination of smartwatch convenience alongside fitness tracking capabilities, and both these wearables have these in spades. But how does the new Fitbit Ionic stack up against the Apple Watch 2? Let’s dive a little deeper.

Both devices have a square watch face design, which today is a bit of an outlier as many smartwatch manufacturers have moved towards circular designs to ape traditional timepieces. As such, both stand out distinctly as pieces of technology on your wrist. 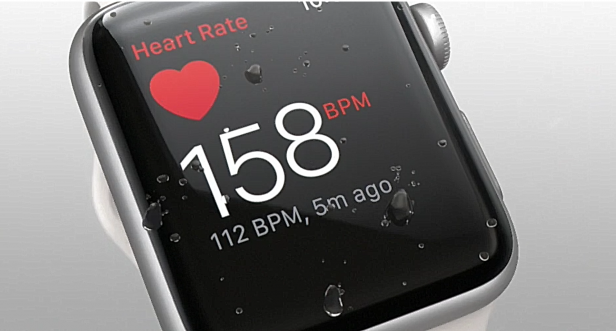 The Apple Watch Series 2 has a touchscreen display that goes up to 1000nits in brightness, making it easy to see outdoors. There are two models, a 38mm option with 272 x 340 resolution and a 42mm option with 312 x 390 resolution. There’s also the rotating crown on the side to let you navigate through menus without getting your fingers in the way of the screen. The Apple Watch 2 runs Apple’s own watchOS operating system. The Fitbit Ionic has a touchscreen 1.42-inch 348 x 250 resolution display but also goes up to 1000nits in brightness. There are three hardware buttons on the side of display to interact and navigate Fitbit’s custom operating system. The Fitbit Ionic is available in three different colour combinations at launch, with replaceable wrist straps.

Both of these wearables are water-resistant to 50m, meaning you’re safe to shower and swim while wearing them.

The Apple Watch 2 has GPS, accelerometer and heart rate sensor onboard, meaning you can track your runs with accurate location data, alongside keeping an eye on your ticker’s performance, too.

The Fitbit Ionic also has these sensors and this is also bolstered by a new relative SpO2 sensor, which is used to detect blood oxygen levels. Fitbit hasn’t actually got a distinct purpose in mind for this sensor, but I’ve been told detecting sleep apnoea could be one potential use in the future. 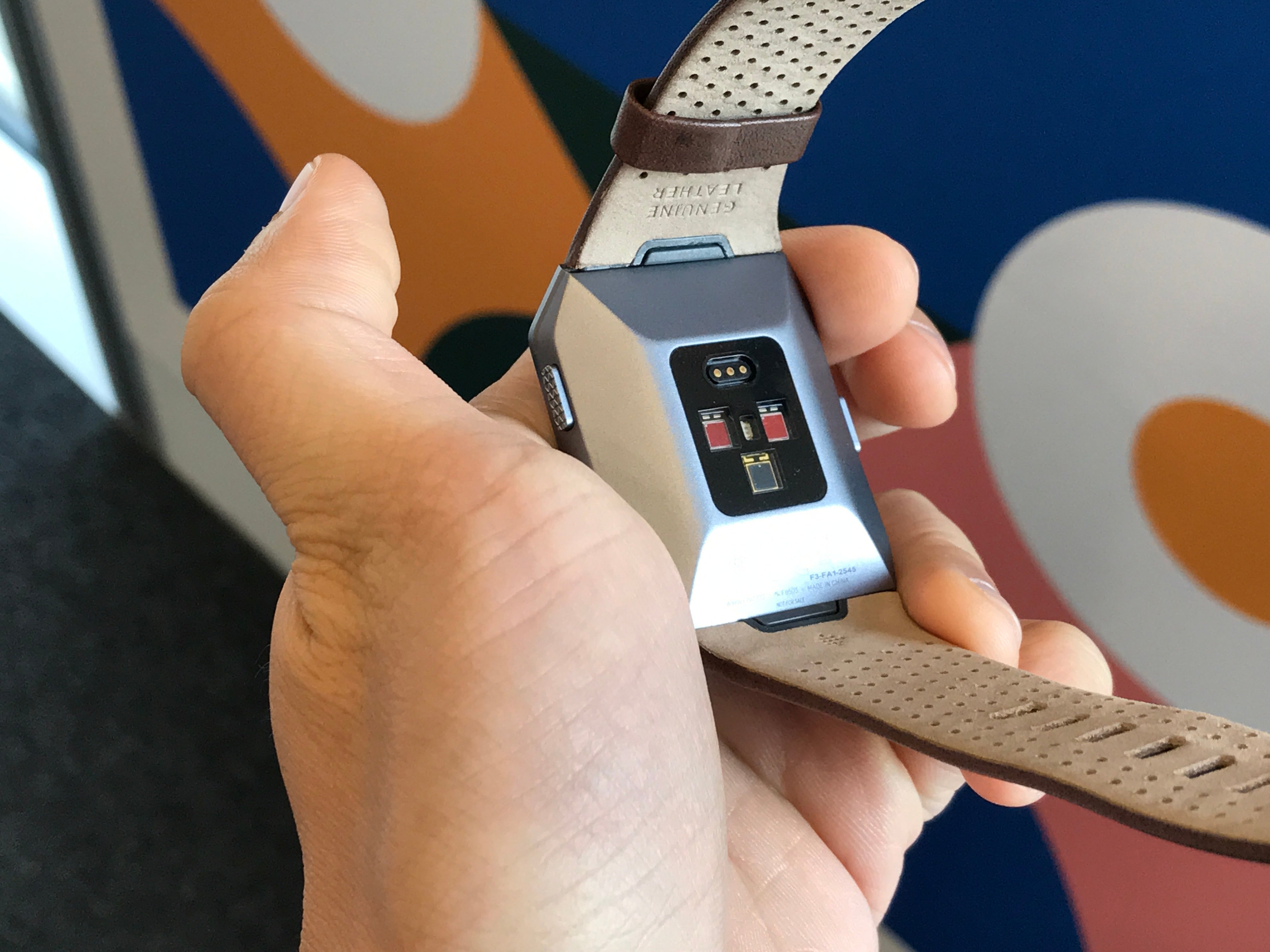 Another area where the Ionic has an advantage is by having an altimeter. This lets it track elevation for your gruelling hill sprints or mountainous bike rides. Without an onboard altimeter, the Apple Watch 2 has to use an iPhone paired over Bluetooth to piggyback its barometer information.

Both wearables have support for contactless payment in the form of Apple Pay and Fitbit Pay, respectively. This means you can add your debit or credit card and make payments. So now you can leave your phone and your wallet behind on your next run.

There’s storage onboard both watches for your music, and support for Bluetooth wireless headphones. The Apple Watch 2 leaves you with about 2GB of space available for music, whereas the Fitbit Ionic is said to have 2.5GB. Either way, you’ll have enough space for your power playlist. 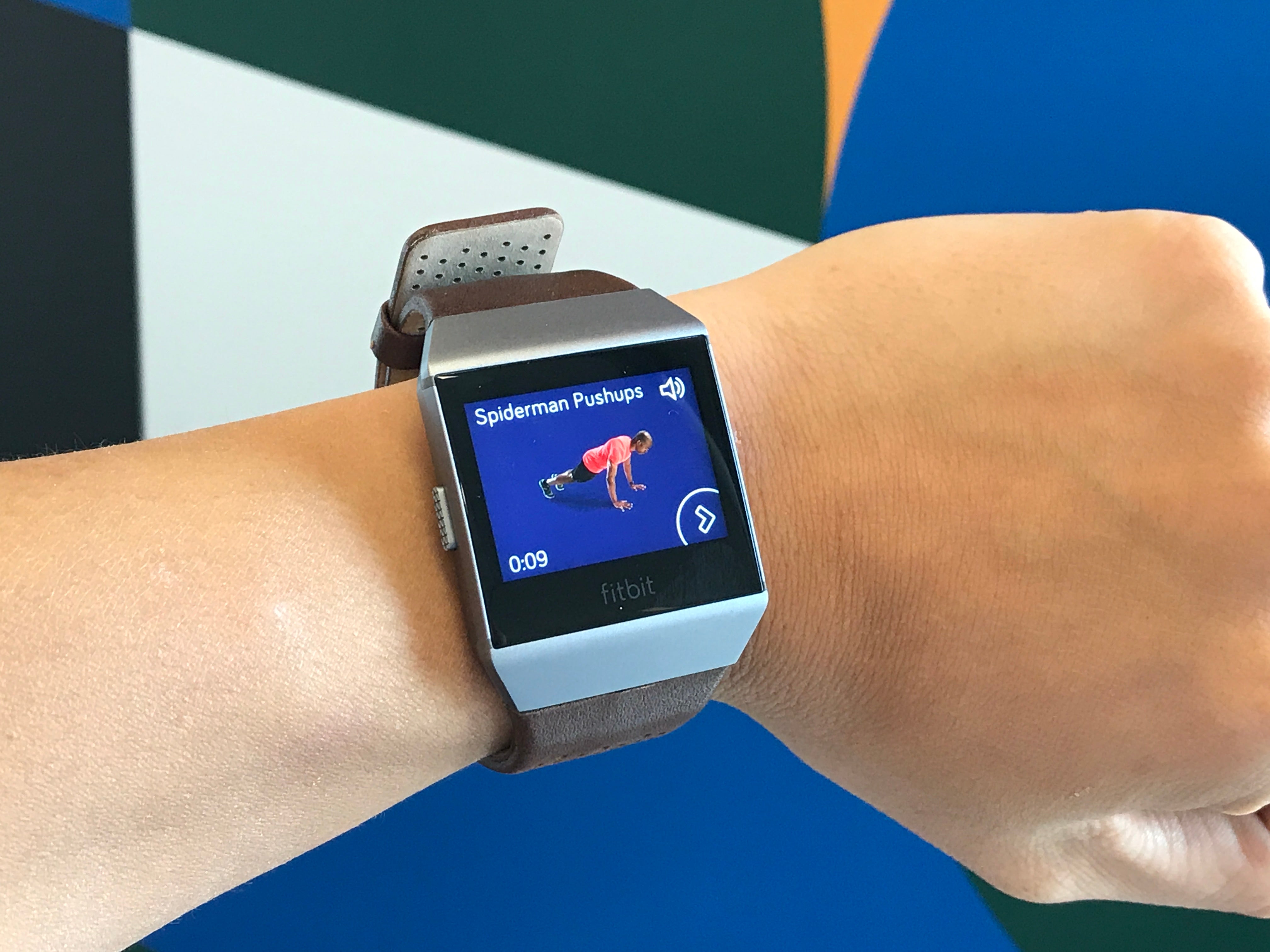 You can expect activity tracking from both watches with the usual move reminders to make sure you don’t stay too sedentary. The Fitbit Ionic has the edge when it comes to sleep tracking, however, as you can expect Fitbit’s excellent sleep stages breakdowns for your night’s slumber that also uses the heart rate monitor.

The Apple Watch 2, on the other hand, doesn’t have sleep tracking built-in as standard as part of Apple’s default apps. There are third-party apps you can install, however, but nothing I’ve found has been as robust as Fitbit’s offering. 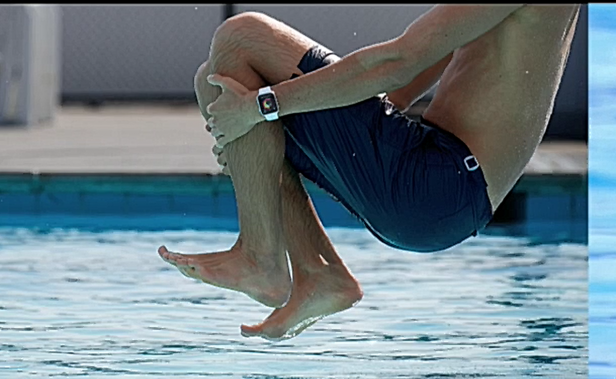 As both watches are water-resistant to 50m, they also have swim tracking capabilities and both can give you real-time information, such as laps, straight from the watch face.

The Ionic has Fitbit’s automatic exercise detection, which includes most popular activities like running, walking, cycling and elliptical machines. You can also auto-start a tracked run just by going outside and running, the Ionic will automatically lock onto GPS and record your route and metrics without any user input. There’s also Fitbit Coach, which are workouts you can follow from your wrist.

The Apple Watch 2 doesn’t have the automation of the Ionic, but you can manually start a number of indoor and outdoor-based workouts. A new watchOS 4 update is said to include far more sports in the standard Activity app, such as basketball, dancing, skiing and even bowling.

I won’t know for sure until I get my hands on the new Ionic for proper testing, but right now it has the potential for better overall exercise and activity tracking.

A smartwatch is only as good as its app selection, and for now this is by far and away an advantage of the Apple Watch 2. With far longer on the market and strong support from developers for watchOS, the catalogue is pretty well stocked for must-haves. Whether that’s fitness-oriented, such as Strava, or banking or messaging, there’s a great selection. 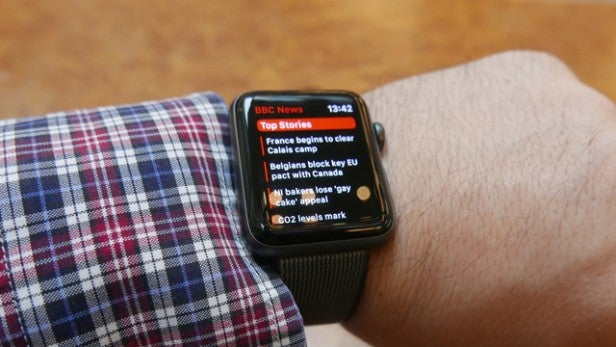 The Fitbit Ionic has an open SDK that will be released in September for developers, and Fitbit is promising that development will be easy. But for now, the app selection at launch is going to be basic. In the UK there’ll be Strava and Accuweather, with Pandora and Starbucks also available in the US. Fitbit will hope the developer community get on board as much more will be needed for it to reach its potential.

The Apple Watch 2 has the edge in other smartwatch functionality, too. With a microphone onboard, there’s the option of using Apple’s smart assistant Siri, as well as dictating messages or accepting phone calls. The Fitbit has no microphone, and you’re limited in only having notifications mirrored to its display. There’s no way at present to interact or respond to messages, making it feel rather limited.

Both the Apple Watch 2 and Fitbit Ionic can have custom watchfaces, so you can customise as you see fit.

One of the biggest limitations of smartwatches to date has been battery life. Many of the early offerings struggled to even make a day. The Apple Watch 2 can go around two days without the need for a charge, which was a big improvement over the original.

Fitbit is promising over four days for the Fitbit Ionic, which is a major feather in its cap. This will also make its sleep tracking far more useful as you won’t end up having to charge it overnight.

Fitbit Ionic vs Apple Watch 2 – Which is better value for money?

The Fitbit Ionic will launch for £299, whereas the Apple Watch 2 starts from £369 for the 38mm model. This gives a slight advantage to the Fitbit Ionic, but you have to consider your priorities when deciding which model is best for you. 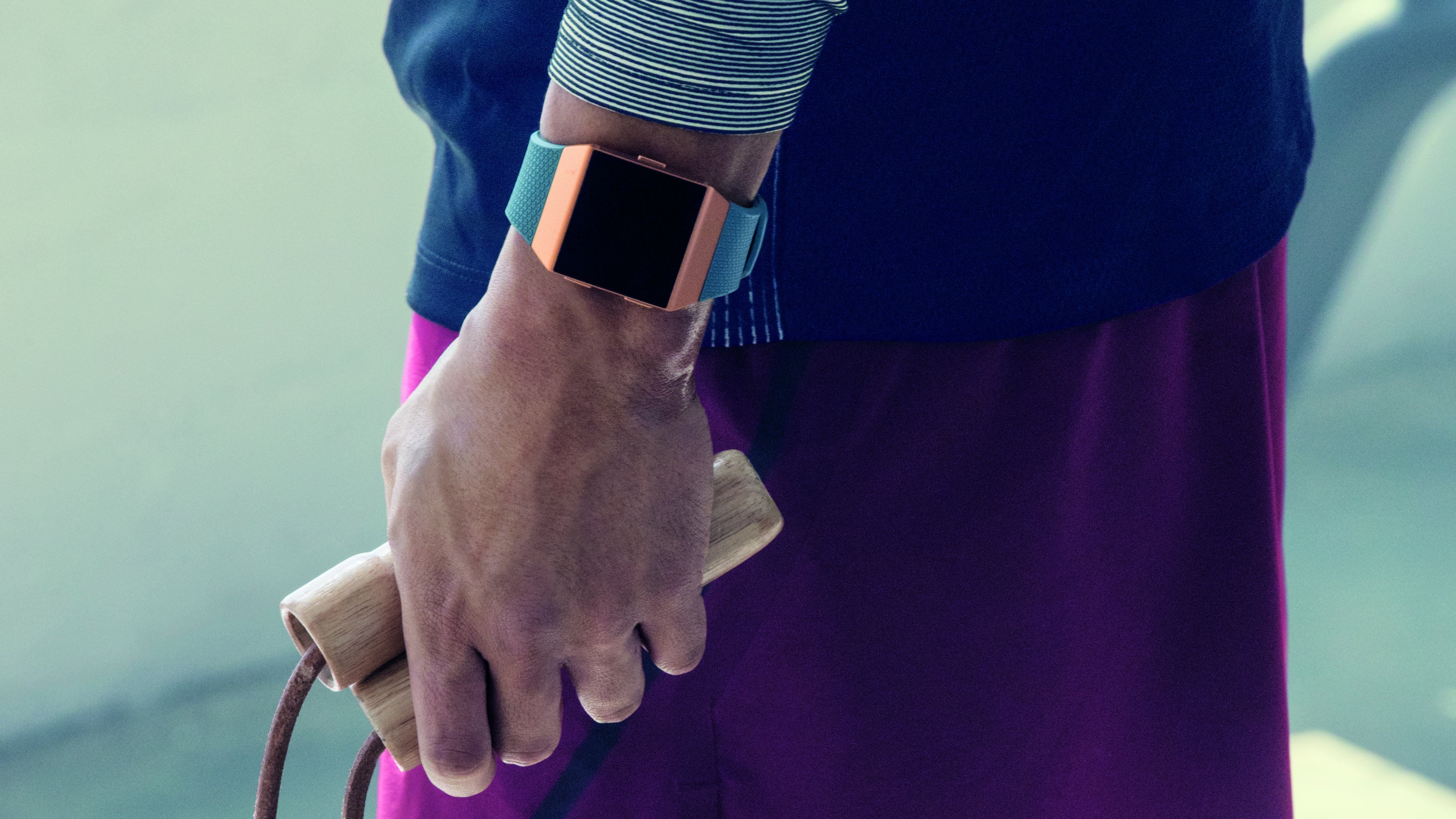 Design: Both watches have a square design with bright 1000nit displays.  Both are water-resistant to 50m, too.

Specs: Both wearables have a similar set of sensors and specs, including heart rate monitor, built-in GPS and onboard storage for music. The Fitbit Ionic also has a Relative SPO2 sensor for bloody oxygen levels but there isn’t a use for this just yet.

Battery life: The Fitbit Ionic has exceptional 4+ days battery life, whereas the Apple Watch 2 can manage about 2 days on a single charge.

So how does the Fitbit Ionic sound to you? Let us know your thoughts on Facebook or Twitter.