Thinking about getting a new wearable to track your sleep, fitness and general well being while we’re in lockdown? Then you’ll almost certainly have considered the shiny new Fitbit Charge 4 and ruling Apple Watch 5.

But with both having very different feature sets, and price tags, knowing which one is right for your specific needs and budget can be a little tricky. Here to help you make the right choice, we’ve detailed four things to keep in mind when choosing between the Fitbit Charge 4 and Apple Watch 5.

Editor’s note: We haven’t reviewed the Fitbit Charge 4 yet, so this is an early breakdown based on the two wearables’ specs and on-paper feature sets. We’ll update this article with our real-world findings when we get the new Fitbit in for testing.

1. Fitbit Charge 4 vs Apple Watch: There’s a difference between fitness and health tracking

Before you go rushing to buy one of the two, you should be aware they both have slightly different focusses. The Fitbit Charge 4 is a basic smartwatch/fitness tracker hybrid that aims to help people monitor their workouts and check incoming notifications. Thanks to the addition of an inbuilt GPS, SpO2 sensor and local music playback support this means it can, on paper, generally match the Apple Watch 5 for fitness tracking.

But, Apple’s wearable has loftier goals than basic sports tracking. Specifically, it aims to offer hardcore healthcare services. These include the addition of an ECG sensor, alongside a regular HRM, that can be used to spot anomalies in its wearer’s heart rate and warn them of possible serious medical issues on the horizon.

It also features a nifty fall detection service that can alert healthcare professionals and emergency contacts if its wearer takes a tumble and needs help. This makes it a better option for people looking to keep tabs on vulnerable relatives or friends remotely. 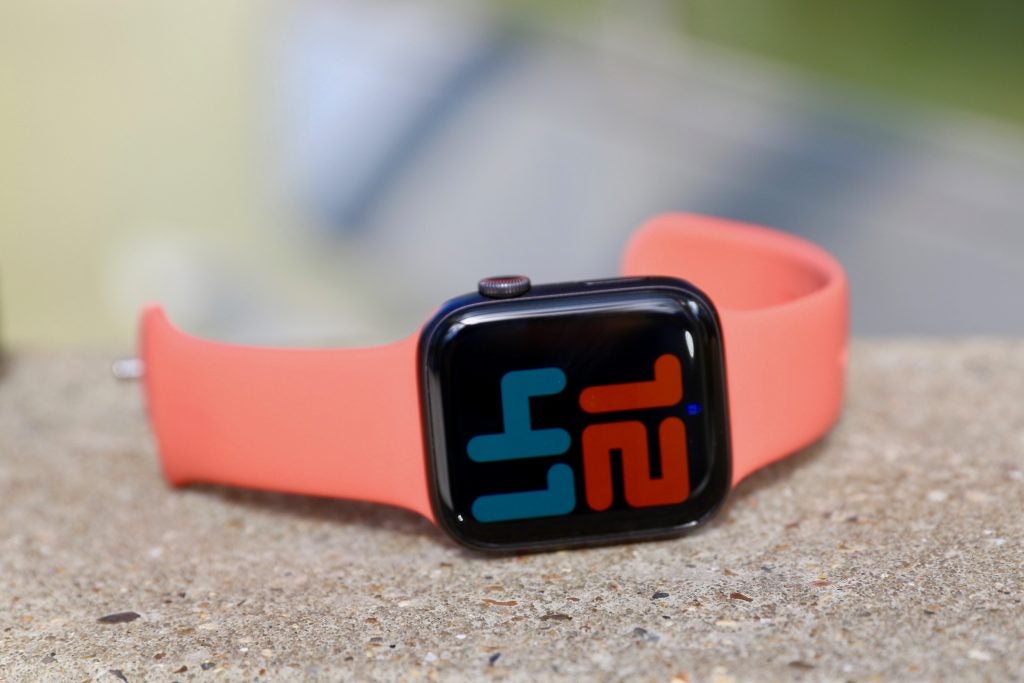 You’ll also want to factor in the fact that both wearables use different operating systems. Specifically, the Apple Watch runs using the iPhone-maker’s WatchOS while the Charge 4 uses Fitbit OS.

Both have app libraries and you’ll be able to find most of the essentials on Fitbit, including Spotify, Strava and Run Keeper. It’s also the only option if you use an Android phone as WatchOS doesn’t work with Google’s mobile operating system at the moment.

But there’s no getting round the fact WatchOS has a much more diverse library of apps for iPhone users. As it stands WatchOS is the most developed wearable OS around featuring over 19000 apps at the time of publishing. This means, if you want a smartwatch to go with your iPhone 11, you’ll likely be better off with the Apple Watch 5.

If you’re looking for a way to stay in shape from home, the Charge 4 is the only one of the two to come with free guided workouts functionality out of the box. Specifically, you’ll get 90 days access to Fitbit Premium.

This is a nifty service that offers on-screen guided workouts for everything from yoga, general cardio and free weights sets. It usually costs £7.99 per month, so 90 days of free access is a pretty sweet bonus. If you get the Charge 4 now, Fitbit’s also made 40 of the service’s guided activities free to help people stay in shape, and sane, during the current lockdown.

If you’re on a budget, the Charge 4 is also a much cheaper option. With the basic model retailing for £129.99, the Fitbit Charge 4 is less than half the price of the basic Apple Watch 5, which retails for a hefty £399.99.

Though the Apple Watch comes with more apps and a much more developed set of wellness services, the bump is a hard pill to swallow and means the Charge 4 is on paper a much more cost-effective option.