TrustedReviews: Far Cry 4 is very similar in a lot of aspects to Far Cry 3. Is that because you’re working off a successful business model or have you decided that the DNA of the series needs to have certain aspects locked in?
Alex Hutchinson: I think it’s a funny moment in any franchise where you’re forced to decide what to keep and what to jettison. Look at GTA 5. GTA doesn’t really change all that much between iterations in terms of what the player does. Neither does Halo. Neither does Call Of Duty. With Far Cry, we’ve been moving around quite a bit, but I think we were happy with where Far Cry 3 ended up in the mainstream.

Once you dig into it, though, there’s a huge ton of new content in Far Cry 4. We kept some of the basic building blocks of the game, but there are obviously brand new tools and toys, there’s co-op, there’s choice in the narrative, there’s new side-quests, new characters, new enemies and the like. It’s a question of how much it has to change before it’s something different. But the bare bones are something we’d like players to have in mind before they buy it.

We want players to know what they’re getting when they buy Far Cry 4.

And is a massive power trip part of the package? One of the biggest aspects of Far Cry 3 was that you were the alpha in the ascendance. Is that one of your building blocks on this game?
It was definitely the heart of Far Cry 3. With Far Cry 4 we did something slightly different, where that outcome is still certainly possible, but we wanted to lean more into player choice. We had to step back a bit. The protagonist, Arjay, is more of a vessel for the player than he is a character that defines your experience. 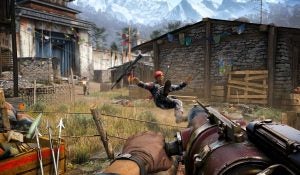 You can also play it the way you want to. You can be the stealthy assassin or you can choose to align with different factions within the rebel groups you’re moving in. Overall, though, you’re right. There’s this sense of being an alpha. The sense of mastering the place you’re in and the tools you have at your disposal. That’s key to Far Cry, for sure.

Talk to me a little about the creation of Pagan Min [Far Cry 4’s main antagonist]. Was there a conscious effort to top Vaas Montenegro [Far Cry 3’s main villain]?
Well, we were trying to find something fresh and different. We didn’t want to re-tread any old ground. We wanted someone who was visually arresting. You knew as soon as you saw him that ‘this is Far Cry 4’. Our art director was very fond of the idea of a villain in a pink suit and generally flamboyant attire. This was a big concern since we’re in the shooter market where it’s generally all greys and greens and military veneer. We wanted a villain that was as colourful as our world. 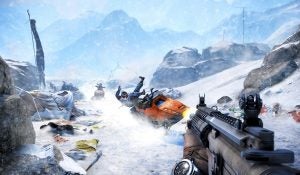 In terms of his personality and goals… well, we’d kind of grown tired of the bad guy who continually issues threats. They can hurl all the threats that they like at you, but at the end of the day, you bought the game – if you play it to the end, you’ll win! So villains are issuing hollow threats in games. There’s not even an inkling you’ll lose. There’s no fear here.

So we wanted a villain that would unsettle the player. We wanted them to think ‘does this guy want to be my buddy?’ What does it even mean that someone like this would want to be your ally? He’s clearly a dictator and an oppressor. But we wanted players to spend some time around him to throw them off-balance.

Can you tell me a bit about the main character? It’s hard to get a sense of him in the short time we’ve been allowed to have with him.
That’s good! We wanted the main character to get out of your way. There are certain games where having a verbose character or one that has a strong story arch helps the overall experience. In Far Cry 4, what we really want is to have the player experience the game in their own way. We wanted a character returning to a familiar place and have the basics in place, but really you as the player gets to show the game who you are.

I think that part of the narrative might be quite divisive. Some players just want to be taking along on a narrative journey and that’s not our goal in Far Cry 4. You, the player decide what you’re going to do – not just in the style of how you defeat enemies, but which sides you ally yourself with and why you would do that. 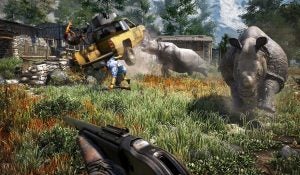 A lot of Ubisoft’s core games – Assassin’s Creed Unity, Far Cry, The Crew and Tom Clancy’s: The Division – are all open world. Beyond Rayman and Rabbids, Ubisoft seems to be plumping for open world experiences. Do you think that core linear games are dead? Or at least on their way out?
For sure! As a group – and I don’t want to speak for everyone at Ubisoft – but generally, we agree that player agency is king. Letting the player drive the experience is what we do best. It’s a game, not a movie. That’s why we end up in the open world space. We don’t want to drive the player down a tunnel.

Assassin’s Creed: Unity, Far Cry 4 and The Crew are all being released within a month of each other. Those are all huge games. Aren’t you worried their audiences will eat into each other?
There’s always the worry that you put out a lot in a short space. I think we’re lucky that those games are all very different experiences from each other. Sure there’s crossover but everyone else seems to have dropped out of that release window. It’s a big window so hopefully people will pick up all three. 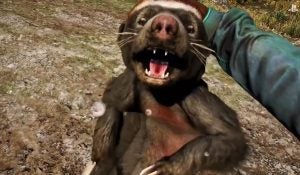 If there’s more fun than there is pain, then that’s a direction we could definitely go in!