The “Survivor 2299” website now carries a new countdown banner that asks Fallout fans to wait patiently for the arrival of Nuclear Winter at the end of the week.

With the countdown timer currently scheduling Nuclear Winter for around 8.30pm BST on Sunday, December 1, which is obviously done deliberately to coincide with the start of the new winter month.

We expect that the Survivor 2299 teaser site will be given a rather large update on this date ahead of the larger reveal teaser by the other countdown timer for December 11.

There have been myriad taunts on the site so far, including audio teasers, Morse code snippets and links to past Fallout games including Fallout 3 and its unmarked Oscar Zulu radio station quest.

Find out more below:

Update 22/11/2013: The Survivor 2299 Fallout 4 teaser website continues to taunt us with new codes to decipher ahead of a potential VGX announcement.

It now bares the rather complex code of: “ZL/QRNE/FVFGRE./V’Z/URNQVAT/GB/GUR/VAFGVGHGR./TBQ/XABJF/JUNG/UNCCRARQ/GB/GUVF/CYNPR/ABJ./GUVF/BYQ/ONFGNEQ/JVYY/URYC/HF./UR/ZHFG/URYC/HF./–0321–“

This translates to:
“MY DEAR SISTER. I’M HEADING TO THE INSTITUTE. GOD KNOWS WHAT HAPPENED TO
THIS PLACE NOW. THIS OLD BASTARD WILL HELP US. HE MUST HELP US. –0321–”

At one point if you highlighted the text on the page, before the new code appeared, the site said: “Nuclear winter is coming. Reserve your future home today! 877-260-2299″. If you called this American number you were met with a recorded message that plays the Tranquility Lane music from Fallout 3.

However, this phone number is now inactive.

The site then offered the phrase “###PERMISSION DENIED BY OVERSEER (15334) ###” when you hovered over the text, but this has gone too now.

You have to admit, Bethesda is doing a really good job of teasing Fallout 4 and has certainly riled up the Fallout fans ahead of an official announcement. 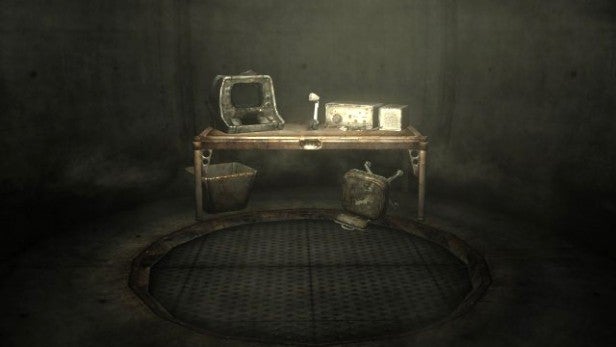 Original Story:
The Fallout 4 “Survivor 2299” teaser website has been updated with a new Morse code signal and an official Bethesda Vault-Tec logo.

The Survivor 2299 Fall out 4 teaser site is still a mystery, but it has now been updated with a rather cryptic audio Morse code signal.

Of course, eagle-eared Fallout fans have already decoded the message to say “CQ CQ CQ DE OZ SE AS”. Now that may not mean much to the average reader, and certainly not us, but it roughly translates to:

This may well be in relation to the Oscar Zulu radio station in an unmarked quest from Fallout 3, and that’s pretty much the only connection to Fallout 4 the teaser site is giving us so far.

However, the site has also been updated with the official Vault-Tec logo from the Fallout series, which makes the Fallout 4 teaser site seem much more legitimate.

A Fallout 4 trademark was filed by Bethesda for Europe earlier in the week, which incorporated merchandise and digital media as well as the game itself, suggesting Bethesda is gearing up for a big launch.

An official Fallout 4 game announcement is tipped for December 7 at VGX, previously known as the Spike VGA Awards.

Other blockbuster titles have been announced there in recent years, including Elder Scroll V: Skyrim and Uncharted 3: Drake’s Deception.

Square Enix is also allegedly poised to launch the Xbox One and PS4 Tomb Raider: Definitive Edition, a next-generation port of its successful 2013 Tomb Raider reboot.

What’s interesting is that the timer on the Survivor 2299 page is counting down to December 11, rather than the VGX awards date.