Facebook recently launched a pair of Alexa-powered video chat devices for the home, called Facebook Portal and Facebook Portal Plus, which sound a lot like the Amazon Echo Show. Now, the duo have gone on sale in the US alongside some clarifications about Portal and your privacy.

Other than the size and resolution differences, and the fact that one has a screen that can pivot and the other doesn’t, the only difference between Portal and Portal Plus is the general design. You can buy them both here direct from Facebook, or via Amazon US.

There’s still no word yet on whether or not the devices will ever see a UK release.

Facebook has, however, sought to further clarify some key points about how Portal handles users data.

“When you make a Portal video call, we process the same device usage information as other Messenger-enabled devices. This can include volume level, number of bytes received, and frame resolution — it can also include the frequency and length of your calls. Some of this information may be used for advertising purposes. For example, we may use the fact that you make lots of video calls to inform some of the ads you see. This information does not include the contents of your Portal video calls,” a Facebook representative writes. 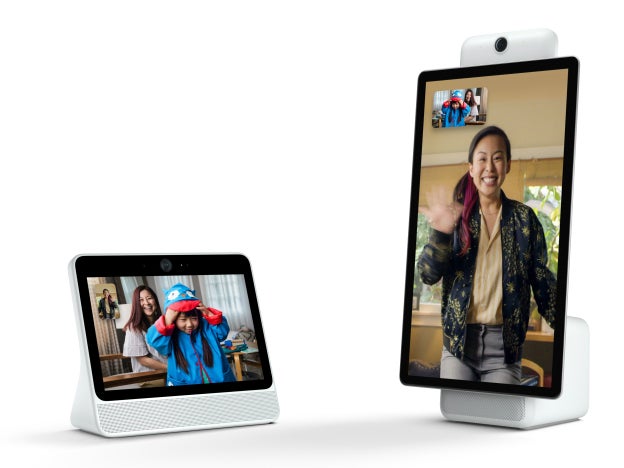 First and foremost, they’re video chat devices. That means they’re equipped with a camera and a microphone, but to calm fears from privacy-conscious consumers, the social network will let you disable the camera and microphone with a single tap. There’s also a camera cover.

The company says Portal’s camera is AI-powered, and it can automatically pan and zoom to keep everyone in view. The microphone, meanwhile, has a feature that Facebook calls ‘Smart Sound technology’, which is designed to minimise background noise and enhance the voice of the person speaking.

You can use Portal to call any of your Facebook friends through Messenger, whether or not they also own a Portal device. Portal supports group calls of up to seven people at a time, Facebook says, and you can make use of a selection of Snapchat-inspired AR effects too. You can start a video call hands-free by saying “Hey Portal” and the name of the person you’d like to call.

“We know that privacy and security are important when you bring new technology into your home,” wrote Facebook in a blog post. “That’s why we designed Portal with tools that give you control.”

It continues: “To manage Portal access within your home, you can set a four- to 12-digit passcode to keep the screen locked. Changing the passcode requires your Facebook password.

“We also want to be up front about what information Portal collects, help people understand how Facebook will use that information, and explain the steps we take to keep it private and secure:

“Facebook doesn’t listen to, view, or keep the contents of your Portal video calls. Your Portal conversations stay between you and the people you’re calling. In addition, video calls on Portal are encrypted, so your calls are always secure.

“For added security, Smart Camera and Smart Sound use AI technology that runs locally on Portal, not on Facebook servers. Portal’s camera doesn’t use facial recognition and doesn’t identify who you are.

“Like other voice-enabled devices, Portal only sends voice commands to Facebook servers after you say, ‘Hey Portal’”.

The Portal and Portal Plus were reportedly originally supposed to launch at the start of May.

However, Facebook is believed to have pushed back its original plans because of the Cambridge Analytica scandal, which escalated in March. Because of this apparent delay, according to DigiTimes, Facebook has also cut its 2018 order volume by around 20%.

Confusion has reigned over just how much data Facebook Portal intends to collect – and what kind of it data it consists of in the first place.

In an October 8 interview with Recode, the company’s marketing lead for Portal, Dave Kaufman, told the outfit that “…no data collected through Portal — even call log data or app usage data, like the fact that you listened to Spotify — will be used to target users with ads on Facebook or any other app.”

Except, that wasn’t really the case at all.

Facebook has since reached out to Recode to ‘clarify’ that, yes, actually Facebook Portal will be logging user data and feeding it to the ad targeting algorithm gargoyles right across its ecosystem.

“Portal voice calling is built on the Messenger infrastructure, so when you make a video call on Portal, we collect the same types of information (i.e. usage data such as length of calls, frequency of calls) that we collect on other Messenger-enabled devices. We may use this information to inform the ads we show you across our platforms. Other general usage data, such as aggregate usage of apps, etc., may also feed into the information that we use to serve ads,” a Facebook spokesperson said in a statement to the site.

And in a follow-up phone call, Portal product VP Rafa Camargo sought to complete the about face turn, telling Recode: “I think [my colleague] was intending to say that we don’t intend to use it. Potentially, it could be used.”

So, there you have it. Facebook said one thing, but it turned out what it actually meant the complete opposite.

Portal will indeed be harvesting your data and schilling ads against it, which shouldn’t really be a surprise, as that’s how the company makes most of its money.

As previously mentioned, the company has issued a final clarification at the device’s launch, saying that:

“When you make a Portal video call, we process the same device usage information as other Messenger-enabled devices. This can include volume level, number of bytes received, and frame resolution — it can also include the frequency and length of your calls. Some of this information may be used for advertising purposes. For example, we may use the fact that you make lots of video calls to inform some of the ads you see. This information does not include the contents of your Portal video calls.”

However, the ‘confusion’ about Portal data collection is a bit of a disaster, as Facebook is trying to rebuild its tattered reputation and move into the hardware space simultaneously.

You really would have thought the company might have learnt a thing or two about transparency over the last 12 months.

Is there any way under the sun you’d let Facebook hardware in your home? Tweet your thoughts to us @TrustedReviews.