Facebook’s annual F8 conference is currently taking place in California. Here’s a summary of the most newsworthy happenings this far.

Facebook has released its virtual reality-based communal hang-out app Facebook Spaces to the Oculus Rift Store. Previously announced at Oculus Connect 3, the app is essentially a virtual chat room, where your digital avatar can assemble with others rather than, say, meet up to go to the park or the pub.

While using the the so-called “future of social VR” app, you can hang out inside 360-degree videos and, for example, take flyover tours of vacation destinations or gather with friends in a completely virtual environment.

Here’s a closer look at Facebook Spaces featuring some quite insufferable millenials. So far, it’s only available for the Oculus Rift and Oculus Touch, but the app itself is free.

It turns out adding stickers to Instagram posts (and copying Snapchat) was just the beginning of Facebook’s AR ambitions.

At F8, CEO Mark Zuckerberg announced what he described as the first ubiquitous augmented reality platform and invited developers to build apps on top of Facebook’s core service.

In examples shown in the keynote, Zuckerberg demonstrated how digital messages could be left on the fridge and then seen when the recipient points their camera at the fridge (seems whiteboards and text messages work pretty well in that department?).

“As silly as these effects might seem, they give us the ability to share what matters the most with us on a daily basis,” Zuckerberg said.

Yes they do seem silly, Mark. Exceptionally so.

Zuckerberg said augmented effects, precision location detection and image recognition were the three key tenets of the platform, which will gradually roll out with invited developers gaining initial access. 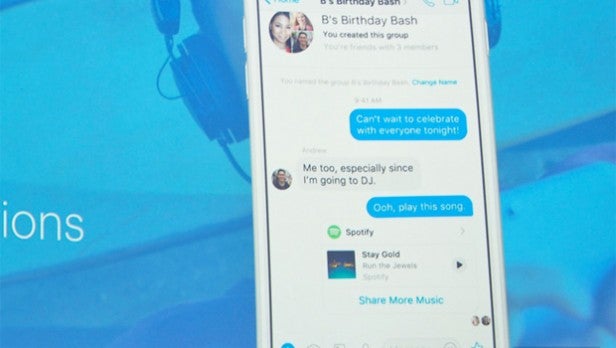 Facebook is attempting to make it easier to log-in to third-party Android apps when you may have forgotten the individual passwords. Users will be able to get into the apps by using their Facebook account via a text message sent to their phone or via a voice call in 10 languages.

Companies are diving in on Facebook Messenger Bots. There are now over 100,000 in total with some interesting new ones on the way. For example, Subway is now enabling US customers to pre-order at 26,500 locations, while the Golden State Warriors NBA team now has a bot that will send fans live scores, video highlights, while making it easier for fans to connect with each other.

Workplace is getting a free version

Facebook has announced its office collaboration app Workplace will have a free version by the end of 2017. Seen as a rival to Slack, Workplace enables companies to chat and collaborate on certain tasks, while also broadcasting using Facebook Live. The free version will not boast the Administrative and Enterprise tools of the full version, which is still available freely until September 30.

We’ll bring you more announcements as they happen throughout the conference. You can watch today’s keynote here.

Are you ready for social VR? Share your thoughts in the comments below.