EVE Fanfest is Icelandic developer CCP Games’ annual gathering for players of its epic space-based MMO, EVE Online. The game focuses on battles, exploration, and trading between galactic empires in the distant future, where humanity has abandoned our home after finding a gateway to the far-off New Eden – a resource-rich new galaxy.

Fanfest sees gamers from around the world travel to Iceland’s capital Reykjavik, where they’re treated to the latest developments in the universe, and announcements about its future.

Part convention, part EVE-centric E3, Fanfest gives players and developers the opportunity to come face to face for a three-day festival packed with round-table discussions about the game and its lore.

Once the panels come to an end, however, there’s a heavy party atmosphere to the event. Reykjavik is renowned for its nightlife, and EVE Fanfest packs in a city-wide pub crawl, with attendees split into groups and guided around by a developer. The annual ‘Party at the Top of the World’ will this year be headlined by Swedish DJ Basshunter.

While there are other EVE Online events throughout the year – some officially organised by CCP, such as EVE Vegas in October, and others player-led meet-ups – EVE Fanfest is the biggest highlight on the EVE calendar. 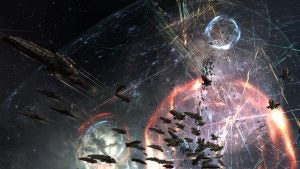 Two factors explain EVE Fanfest’s importance: community and politics. On the former, while the core EVE Online game often rewards players for teaming up and working in coalitions or even in-game corporations, you may be several countries removed from your cohorts. EVE Fanfest serves as a meeting place for players who may never get to otherwise see each other in person.

More important is the politics side, however. Since 2008, CCP has given CSM – or Council of Stellar Management –significant input into the EVE Online universe.

A body of the most dedicated players, the CSM is a ten-person group who serve as player advocates, bringing community concerns to the developers and helps in the continuous evolution of the game world. Each seat is voted on by the wider community, with the elected representatives serving for a year. It’s at EVE Fanfest that the new council is announced.

The event, and the election, also helps set the stage for the game going forward, with the new CSM going on to enjoy regular communications with CCP. They visit the team outside of Fanfest to collaborate in person, and are even able to propose new gameplay features. It’s a huge deal for the EVE Online community, and EVE Fanfest is where it all happens. 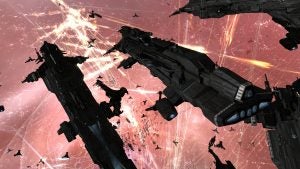 Chiefly, spaceships and data – but probably a whole lot more this year.

Not surprisingly for a game centred on interplanetary adventuring, players love their ships, which come in all sizes from tiny capsule flyers to gargantuan frigates the size of cities. It’s likely there will be much focus on old and new vessels in the EVE universe, from aesthetic upgrades to new ship features with game-changing capabilities.

One of the hallmarks of EVE Fanfest is its keynote conference, which recaps the past year’s activities in the game. EVE Online players tend to be a detail-orientated bunch, and so a regular fixture of the keynote is reams of data covering everything from total distance covered, to ISK (the game’s fictional currency) earned and lost, or the number of ships lost in various altercations.

Fanfest is one of the few gaming events where attendees will cheer bar charts on an auditorium screen. It isn’t as dry as it sounds, however, and CCP usually sneaks in a few interesting nuggets of info on how the team is reacting to player behaviour as a result of all that data.

EVE Fanfest 2018 is particularly auspicious since it marks the 15th anniversary of EVE Online itself. CCP is being tight-lipped on exactly what form celebrations will take, but a few teasers paint a picture of big changes coming to the game. 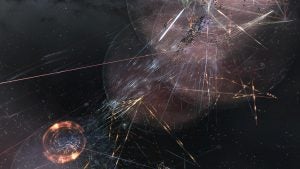 The most telling is that the key art for EVE Fanfest 2018 – as seen on the developer blog – features what appears to be a new starmap behind the logo. That points to new content and possibly new areas for players to explore.

There are also hints of a new race coming to the EVE Online universe, the Triglavian Collective. Ships from the unknown force have been spotted randomly in the game already, since mid-February, with players speculating as to their role in the game going forward.

Expect reveals on this mysterious new faction – and likely much more – at EVE Fanfest 2018.