It’s official: the European Commission says Google is acting illegally on the continent – with Android, anyway.

According to the Commission – the European Union’s executive arm – Google is unlawfully “preventing competition” in the mobile and search markets.

Around 80% of smartphones in Europe (and globally, for that matter), run on Android, Google’s mobile operating system. The remaining 20% of devices are powered by software like Apple’s iOS, Microsoft’s Windows, and BlackBerry OS.

The Commission began investigating whether Google was doing anything dodgy way back in April 2015, and has now formally charged Google with misdeeds across Europe.

But what does the European Commission actually think Google did wrong?

If you want to build a phone that runs on Android, you’ll probably want to feature the huge, slick, app-tastic Google Play Store.

But Google says that if you do this, then you also need to pre-install Google Search and Google’s Chrome browser. It also requires manufacturers to set Google Search as the default search for the device. 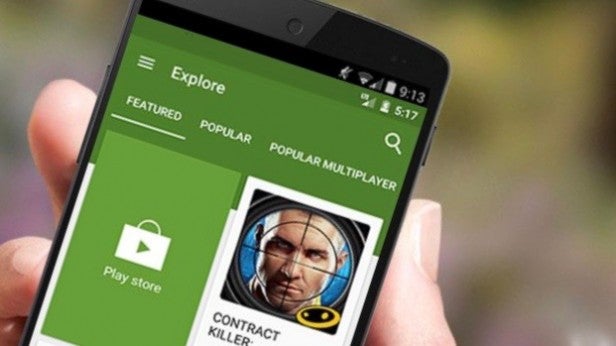 The Google Play Store has over 2 million apps on offer

The European Commission says that Google is preventing competition on Android by doing this, as it doesn’t give rival search engines and browsers a fair chance to compete.

Android is open-source, which means that anyone can see the code, and use it to create their own spin-off version. That’s exactly what Amazon does with its Fire tablet range.

But forked versions of Android are barred from the Google Play Store. In fact, to use the Play Store and Google Search apps, manufacturers must sign an “Anti-Fragmentation Agreement” that prohibits them from using a forked version of Android on any other device they sell.

This means manufacturers are less likely to develop a rival version of Android, and will instead opt to stick with Google’s in-house software.

The Commission says it actually found evidence of manufacturers being prevented from selling competing Android forks that had “the potential of becoming a credible alternative to the Google Android operating system”.

According to the Commission, Google is giving “financial incentives” to phone makers and mobile network operators.

This money is given as an incentive to “exclusively pre-install Google Search” on their devices.

The Commission says this is unlawful stifling of competition, because it makes it harder for other search engines to break Google’s dominance.

“A competitive mobile internet sector is increasingly important for consumers and businesses in Europe. Based on our investigation thus far, we believe that Google’s behaviour denies consumers a wider choice of mobile apps and services and stands in the way of innovation by other players, in breach of EU antitrust rules. These rules apply to all companies active in Europe. Google now has the opportunity to reply to the Commission’s concerns.”

“The European Commission has been investigating our approach, and today issued a Statement of Objections, raising questions about its impact on competition. We take these concerns seriously, but we also believe that our business model keeps manufacturers’ costs low and their flexibility high, while giving consumers unprecedented control of their mobile devices. That’s how we designed the model.”

“Our partner agreements have helped foster a remarkable – and, importantly, sustainable – ecosystem, based on open-source software and open innovation. We look forward to working with the European Commission to demonstrate the careful way we’ve designed the Android model in a way that’s good for competition and for consumers.”

The charges filed against Google were laid out in a Statement of Objections (SO). The Commission sends an SO to a person or company before making a decision that “negatively affects their rights” – i.e. a punishment or restriction.

If the Commission wants to rely on any objection against Google when making its final decision, it has to be listed in the SO.

, either in writing or at an in-person hearing, to make their case against the objections.

After Google has “exercised its rights of defence”, the Commission then makes a final decision. This could mean Google is forced to change the way it operates in Europe, and could see the company fined up to 10% of its global turnover. That’s a hefty sum, considering Google’s global annual revenue in 2015 was $74.5 billion.

If Google has to reform its business around the three objections, it could significantly change the Android phone market. It would be a significant boon to search engines like Bing and Yahoo, who could find their way into the hands of Android users far more easily, for instance. What’s more, without the Anti-Fragmentation Agreement, phone makers could make much more varied versions of Android, far detached from Google’s own software.

Of course, Google’s Android has been refined over the years, and tools like Google Search and Google Play are now mature and successful. Even if manufacturers have the option to avoid being restricted to these services, we’re now so late in the game that they might not want to.

Reactions to Google vs EU

The Information Technology and Innovation Foundation:

“Today’s announcement shows that the European Commission holds a misguided view of how competition law should be used to protect consumers in the era of digital platforms. Operating systems like Android benefit from economies of scale and network effects that naturally limit the number of competitors in the market, and this often produces greater value for consumers in the form of better features, lower costs, and increased interoperability. Fewer competitors does not necessarily mean that consumers will be harmed. It is striking in today’s announcement that the European Commission has failed to give concrete details about how consumers have been harmed by the alleged offenses.”

“Wait, don’t Apple and Microsoft do the same thing by including their apps on their respective OSes? They might not have as much market share, but that in and of itself is anticompetitive to opposing app makers. Microsoft even does the same thing on the same scale with desktop PCs. If it’s simply because Google has an open source OS, then there’s no reason for Google to close it off and license Android like Microsoft does with Windows Mobile.”

“Microsoft absolutely does. Apple (arguably) does as well. More so with iOS than OS X. The problem with iOS doing this, is that they aren’t in a monopoly situation, so what they’re doing isn’t considered anti-competitive because you have other options in smartphones.
Microsoft on the other hand, has been in trouble for forcing Internet Explorer on users, essentially trying to muscle out Netscape and other browsers in the early days of the public internet. In fact, it was bad enough that Microsoft actually invested hundreds of millions in Apple, which was failing at the time, so they wouldn’t become a de facto monopoly. It was the cheapest solution for them.”

Tell us your thoughts on the Commission’s charges against Google in the comments below.