Dying Light 2 is the sequel to Techland’s 2015 hit, and it aims to improve upon its predecessor in every conceivable way with a bigger world, harsher enemies and even more skills to master amidst the apocalypse.

For this game, parkour and melee combat have received a particular focus, and the developer promised that every mission will present you with multiple choices of how to proceed through the game, leading to many different outcomes in the story.

Trusted Reviews has compiled everything you need to know about Dying Light 2 including all the latest news, gameplay, our hands-on preview, trailers and more.

Dying Light 2 will be coming to PC, Xbox One and PS4 in Spring 2020, with a solid date to be unveiled in the very near future.

Are they zombies? Well, sort of – but in Dying Light 2, just like its predecessor, you’re expected to refer to them as ‘infected’. But there’s little time for semantics in a world devastated by a viral outbreak, and with plenty of the population dead, dying, or undead and hungry.

The original Dying Light flew under the radar for a while, eventually building itself a strong foundation of support and worming its way into the library of many gamers. And it’s easy to see why – what initially looked like another zombie shooter revealed itself to be a mix of brutal melee combat, terrifying horror, and skillful parkour moves.

It’s not surprising that Dying Light 2 picks up where the original left off from a mechanics perspective – on the surface this is business as usual: you’re in a city littered with both infected and hostile humans (as well as some friendly types), it’s open for you to explore and complete missions as you see fit, and you really will want to hide when the night comes.

This time around though, there’s a bunch more to it: parkour has been doubled down on – almost quite literally – with two times the number of moves and animations available to players. It’s also backed up with a ‘parkour puzzle’ system, requiring players to use their dashing-jumping-dangling skills carefully and with consideration to make their way through an area – rather than just running and leaping without a second thought about anything. It’s certainly more involved than, say, Assassin’s Creed’s version of free running.

The parkour puzzle we were shown also involved another updated element – objects with actual physics modeling. What this means is things like ropes act like ropes – and what that means is when you’re haring it across a series of window ledges desperately trying to escape from whatever it is that’s chasing you, you can swing heroically out of danger on a rope. Which is obviously amazing.

Said things that chase you have seen updates for Dying Light 2 as well, with serious work being put in by developer Techland to both the infected and human’s complexity. The undead masses are a bit smarter than before, and though they’re far less of a threat than they were in the daytime last time around, you’ll be wanting to steer clear of most of them in the night when the strength-sapping sun isn’t shining.

That’s not to say you’ll be safe in the daylight, though, with marauding gangs of reprobates roaming the streets, looking for trouble, trying to loot seemingly empty properties, and generally making a nuisance of themselves. New dynamic encounters erupt on the fly and can play out in a multitude of different ways, depending both on how the AI reacts and how the player sees fit to tackle the situation. 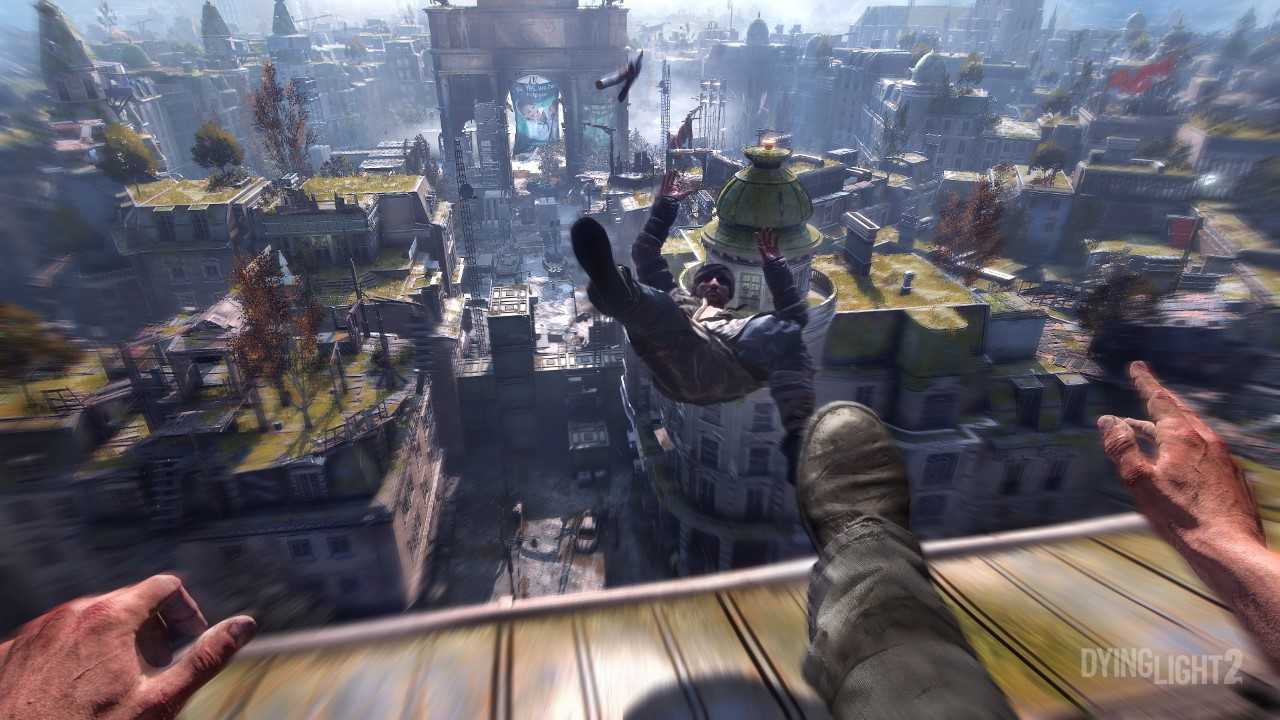 During our demo session we were shown one such encounter – the player stumbled on a small gang breaking into a deserted building with the hopes of finding something valuable. Sneaking around – and using parkour skills, of course – the player was able to take out a couple of guards before being spotted. Thus begins the melee combat system – another feather in Dying Light 2’s hat – which is as brutal as it is tactical, requiring genuine presence of mind to be able to take on human enemies. They want to live just as much as you do, after all.

Alas, someone fired a weapon, alerting the other gang members to the fracas – and waking up the sleeping infected who were inside the not-so-abandoned building. Time to flee, and flee the player does in style, climbing, dashing, leaping, swinging, and eventually making their way to safety. It’s exhilarating just to watch, and this wasn’t even a main mission in Dying Light 2.

Those core campaign missions are where the other big change in the sequel shines through: the element of choice. In the original you had the choice of whether to actually bother doing things or just milling about aimlessly, sure, but it wasn’t a serious, impactful choice that changed the world around you.

In Dying Light 2, players are presented with choices as they move through the story – each one, even seemingly insignificant, can have a huge impact on the world around them. The example we were shown involved a water tower under the control of a local gang – the Peace Keepers, formed in the wake of the viral outbreak and trying to restore some form of order to the new world, want the gang gone so it can give the water freely to innocent civilians in the area.

Players have to make their way to the top of the tower where the gang leader resides. When they get there, after a bit of a chat, he offers the player a choice: join him, reap the rewards, keep the Peace Keepers out. Naturally the player tells him where to go, kicks the boss man off the top of the tower, and gives the PK force control of the supply.

We jump forward a few days and the area is changed almost completely – sympathetic factions have moved in, new constructions like lifts make navigation much easier for the player, and water is freely available for the happy locals (and player, who can restore their health with a sip). Heaven on a post-apocalyptic earth, then?

Of course not. While on the surface things look great – and in many ways they are – there’s something just below a bit sinister about the Peace Keepers. For one, they way they deal with gang members still loitering in the area is brutal, not even allowing them a chance to repent for their previous actions. And for two, even the regular populace is ruled over with an iron fist, and the most minor of crimes are punished aggressively. Relative peace reigns, but the Peace Keepers reign.

Rewinding back to the choice, we’re shown what happens when the player agrees to join with the gang. Skipping forward the region is not in anywhere near as good a shape as when the PK’s took over, with fires raging, gang activity increased and the risk of infected attack higher than ever. Oh, and nobody gets water for free, so plenty are left to die of thirst. Naturally.

But there are benefits to the player, and ones that genuinely will convince some to choose this option for ultimately benevolent reasons. One, they receive a regular income from the selling of the water supply, meaning money is less of a worry – and two, owing to the lack of lawmakers in the area, a black market opens and can be visited by the player.

The greater good might well need some items from that black market – and if you save the city, or more lives than were lost in this region, thanks to the money and goods that come from siding with the gang, isn’t it the more compassionate choice? We don’t know, but seeing as Dying Light 2 already has us asking the hard questions, we’re really looking forward to seeing what other moral quandaries it puts us in next year.