If you didn’t already have a drone on your Christmas list, now might be a good time to pencil one in – DJI has announced a global launch event in New York for November 28 2018, and the signs seem to be pointing towards the unveiling of a DJI Phantom 5.

The invite, which has a travel theme and is titled “Because life is big!”, doesn’t contain many clues to exactly what will be announced on November 28 at 7pm GMT.

The illustration does, though, look a lot like the shape of the Hasselblad lens seen on the recently announced DJI Mavic 2 Pro, so it isn’t a huge leap to suggest that a DJI Phantom 5 with interchangeable lenses (or at least, a Hasselblad camera) will be the big announcement. 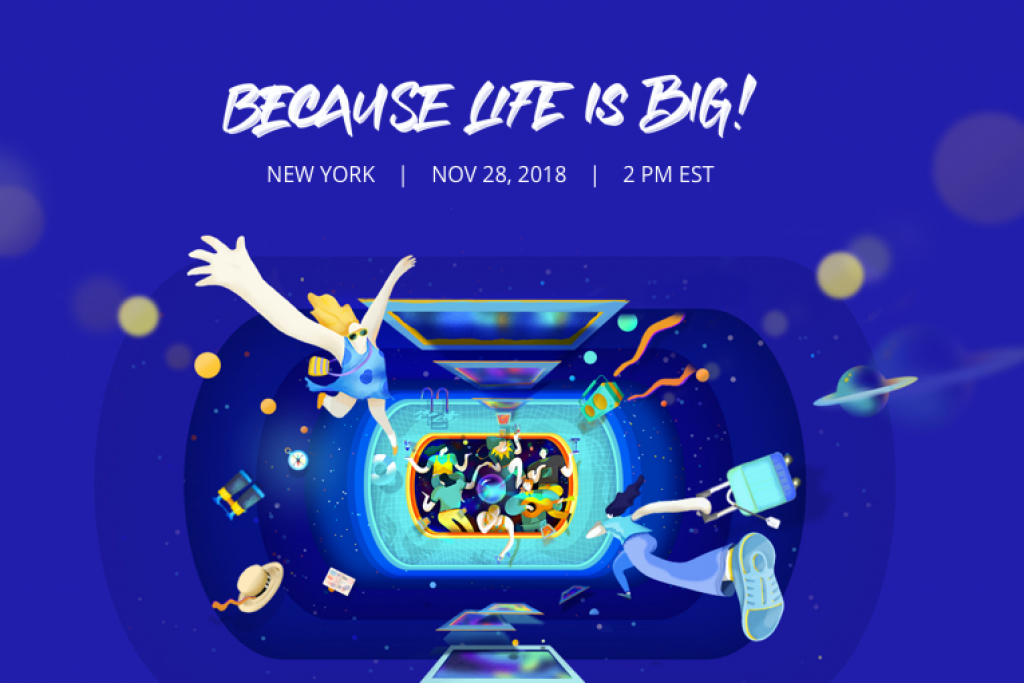 This is backed up by a growing list of rumours and possible leaks, which have grown over the year and resurfaced again recently.

So what specs and features might a DJI Phantom 5 have? And how much might it cost? We’ve rounded up all of the latest rumours ahead of the big event, which we’ll be attending in New York. Here’s what we know so far…

DJI Phantom 5 Release Date and Price: When it be available and how much will it cost?

Given the timing of the launch event on November 28, it seems highly likely that the DJI Phantom 5 (or whichever drone is announced) will be available to buy in time for Christmas.

Also, when the DJI Mavic 2 Pro and Mavic 2 Zoom were announced back in August 2018, both were available to order from DJI’s store on the day. 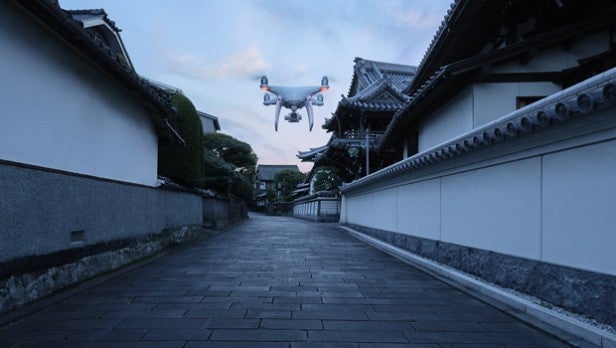 The DJI Phantom 4 Pro is currently available for £1,589, and the Phantom 5 is rumoured to have a similar price tag.

Little is know about possible Phantom 5 pricing, but we can speculate based on DJI’s current lineup. With the DJI Mavic 2 Pro’s price at £1349 and the Phantom 4 Pro currently available for £1589, it seems reasonable to expect that a DJI Phantom 5 will cost similar to the latter.

Some rumours from the likes of DroneDJ have suggested that, like the Phantom 4 range, DJI will announce two Phantom 5 models, called the Phantom 5 Advanced and Phantom 5 Pro, with the latter coming in at just under £2000.

Either way, it’s clear that the Phantom 5 would sit at the top of DJI’s consumer lineup, just below its more pro-friendly Inspire and Matrice models.

Back in May 2018, DJI denied that photos showing a Phantom drone with interchangeable lenses was a prototype Phantom 5, saying it was a one-off, modified Phantom 4 Pro that was designed for an enterprise customer.

It seems likely, though, that this model was at least a testing ground for some of the features we could see in a DJI Phantom 5.

Some rumours have suggested that there’ll be two DJI Phantom 5 models, in a similar vein to the Mavic 2 range: one with a 3.5x optical zoom, and another that will support interchangeable lenses.

The Twitter user @OsitaLV has suggested that you’ll be able to choose from four prime lenses, with focal lengths that go from 16mm to 50mm. That would mean a wide-angle option that would nicely match the feel of the event invite, plus the more classic 24mm and 35mm focal lengths.

It’s possible that these lenses, along with the camera, will be made by Swedish company Hasselblad, which DJI acquired in early 2017. But some sites have speculated that other manufacturers, like Moondog Optics or even Zeiss, could be tempted to enter the fray with bright primes that would give the Phantom 5 even better low light performance.

With the Phantom 5 rumoured to retain the one-inch sensor from its predecessor, an interchangeable lens system would nicely separate it from DJI’s Mavic 2 range. 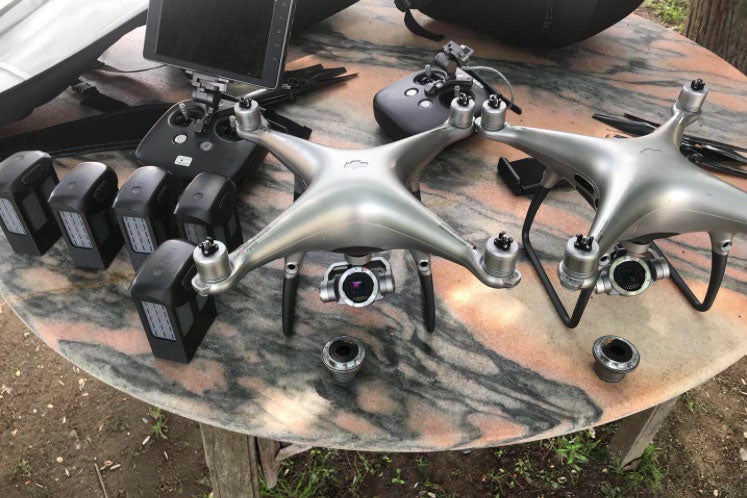 If there is just one model with a fixed lens, though, others have speculated that DJI may go for a larger Four Thirds sensor. The Phantom 4 Pro is able to shoot 4K at 60fps and 20-megapixel still photos, so it seems likely that a Phantom 5 would at least match those specs, while offering improved dynamic range and colour depth we saw on the Mavic 2 Pro.

A few other refinements are also likely, according to rumours. While the Phantom 4 Pro can manage 30 minutes flight time, the Phantom 5 will apparently push this to 35 minutes and beyond.

Like the DJI Mavic 2 Pro, it’ll also apparently add near 360-degree obstacle detection, thanks to extra sensors on all sides, and also potentially water-proofing (or rain-proofing) for flying it out in the drizzle or over the sea.

There’ll also be a mechanical shutter (to help avoid the rolling shutter effects you get from electronic shutters), adjustable aperture and a quieter operation, which is something DJI has been improving gradually on its drones since the special edition Mavic Pro Platinum.

So far, the only speculation about the DJI Phantom 5’s design has come from the shots above of the apparently modified Phantom 4 Pro, which DJI said was not a prototype for a new Phantom.

While evidence about its design is so far thin on the ground, it seems likely that a Phantom 5 will look similar to its predecessor and only make relatively minor changes, such as a new paint job and retractable landing gear.

DroneDJ did also speculate that an unknown new controller seen in the above video might be for the Phantom 5, although it’s possible this may also be a new controller for the Mavic 2.

We’ll update this page as soon as we get official information from the launch event on November 28, so make sure to check back to find out whether the announcement is indeed a new Christmas-bound DJI Phantom 5, or something more Osmo-flavoured.

It seems likely that DJI will release a new drone, rather than simply an update to the DJI Osmo Mobile 2 gimbal, at its event on November 28 2018. And with its Mavic range all freshly updated, the DJI Phantom 5 seems the most likely announcement.

DJI’s main focus this year has been on bringing the camera tech and colour modelling it gained from acquiring Hasselblad in early 2017 to its drones. And with the New York event being a global launch, we may even see two new drones (a pair of DJI Phantom 5s) plus an updated camera for its Osmo gimbal too. DJI’s Phantom range has been overshadowed by the superb Mavic series recently, particularly since the DJI Mavic 2 Pro managed to pack in the same size one-inch sensor as the Phantom 4 Pro. This means it’s definitely in need of an update to prevent it from being squashed between the Mavics and more pro-friendly Inspires.

Even at the hobbyist level, there are still great potential benefits from having the option of a larger drone. Stability in breezy conditions is one, and also the possibility of a having a larger mount and gimbal setup that can support interchangeable lenses. This would make the DJI Phantom range the drone equivalent of a premium mirrorless camera like the Fujifilm X-T3, which is something of a sweet spot in camera-land.

We’re excited to find out at the event in New York, which we’ll be attending – so make sure to check back at this page to see if your Christmas list plans will need a last-minute edit.

What do you think DJI will announce on November 28 and would you be excited about a new Phantom 5? Let us know @TrustedReviews on Twitter.