Smartphones aren’t exactly slouches when it comes to shooting video, but DJI thinks it has just the thing to take your YouTube vlogging and Instagram Stories to the next level – its new DJI Osmo Pocket video camera.

Announced on 28 November 2018, the Osmo Pocket is a tiny 4K camera with a three-axis gimbal, which helps you shoot smooth footage and cinematic effects like pans and slo-mo.

We’ve now reviewed DJI’s latest handheld gimbal, so for an in-depth look at its strengths and weakness plus some sample videos, head to our DJI Osmo Pocket review.

Looking for a quick breakdown of the Osmo Pocket’s main features or an answer to a specific question? We’ve rounded up everything you need to know in this handy guide.

DJI Osmo Pocket Release Date and Price: When is it available and how much will it cost?

That price is much higher than the DJI Osmo Mobile 2, which recently came down to just £109 after Black Friday. This is because DJI’s Osmo Mobile range doesn’t have a built-in camera or a pocketable form factor, instead relying on your camera to take the video and photos.

While that makes the Osmo Mobile 2 much cheaper, it does mean your phone is out of action when you’re filming. It’s also far less portable at 29.5cm long, compared to the 12cm Osmo Pocket. 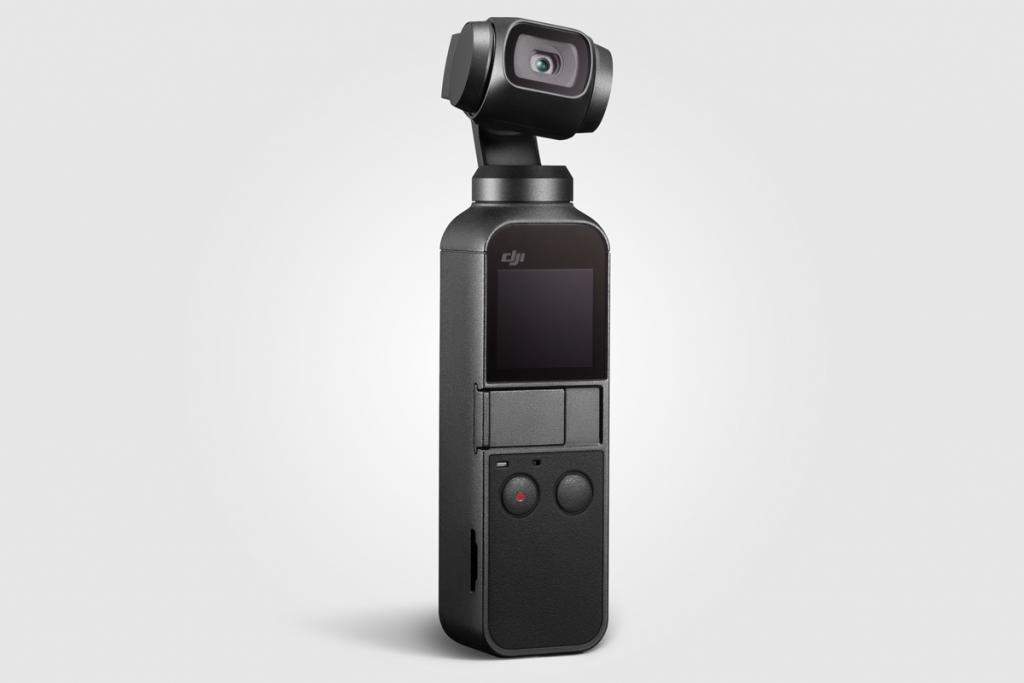 DJI Osmo Pocket versus GoPro Hero 7 Black: What are the main differences?

The Osmo Pocket does undercut the GoPro Hero 7 Black on price, which is currently £379.99 and probably its closest rival.

The two mini cameras do have their differences: the Hero 7 Black is fully waterproof to 10-metres and relies on impressive electronic image stabilisation, which largely negates the need for a mechanical gimbal in handheld situations where there is good light.

Electronic stabilisation does, though, struggle a bit in darker conditions, as the below side-by-side comparison shows. Still, although there is a waterproof case in the works for the Osmo Pocket, the Hero 7 Black remains your best bet if you’re looking for a mini video camera that can survive extreme sports and all weather conditions.

DJI Osmo Pocket specs: What camera and features does it have?

Despite rumours that the DJI Osmo Pocket would have the same one-inch Hasselblad camera as the DJI Mavic 2 Pro drone, it actually has a 1/2.3-inch sensor – that’s the same size as the GoPro Hero 7 Black and in the ballpark of most flagship smartphone cameras.

Still, the lens has a respectably bright aperture of f/2.0 and the Osmo Pocket can shoot 4K at 60fps and 1080p at 120fps for slo-mo videos, plus 12-megapixel stills.

Unlike the fixed focus GoPro Hero 7 Black, the Osmo Pocket’s camera allows you to choose focus points. This means you can get some lovely bokeh background blurring, although the downside is that the autofocus can occasionally hunt for focus.

On the handle, there’s a touchscreen that shows a live feed from the camera and controls the camera, while below that are a recording/shutter button and a function button. 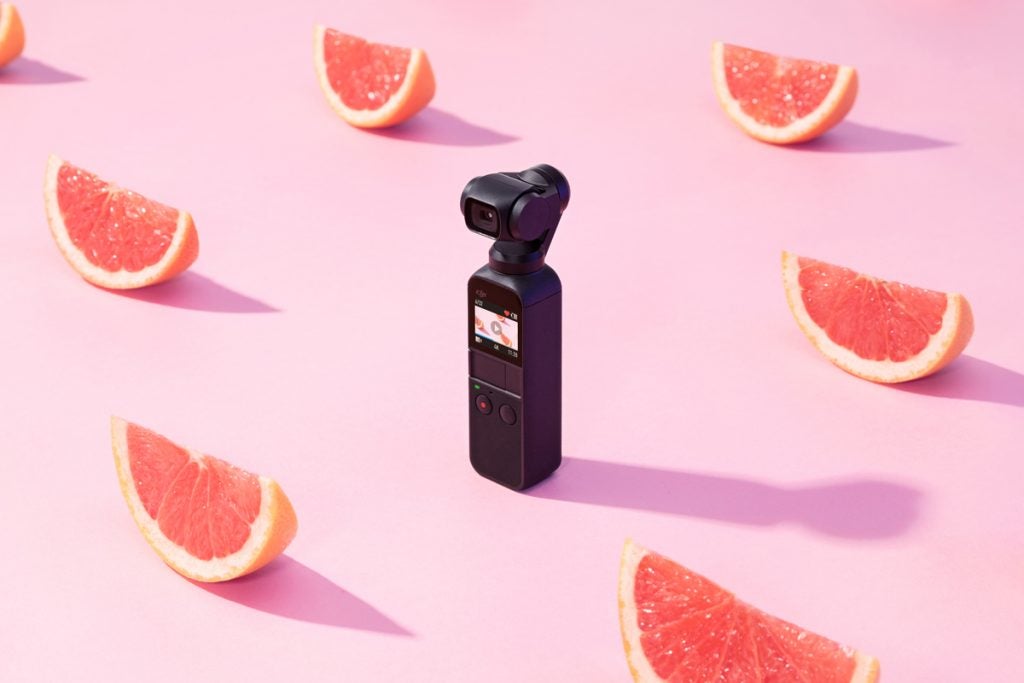 There’s also a built-in stereo microphone, and you will also be able attach an external microphone via an 3.5mm adaptor (though there’s no price or release date for that yet).

The Osmo Pocket is charged via USB-C, which means you can top it up via external batteries, and uses microSD cards for storage.

Perhaps the most interesting new feature, though, is the new DJI Mimo app, which it connects to via Bluetooth. This brings some familiar features, like ActiveTrack (for automatically following subjects) and Timelapse, plus some new ones like Story Mode. The GoPro Hero 7 Black is fully waterproof without a case and relies solely on electronic image stabilisation.

Our tests confirmed DJI’s claim that you can get around two hours of 4K/30fps video from a charge, which is impressive considering the Osmo Pocket’s size.

In real world use, where you’ll mostly be shooting shorter clips, the Osmo Pocket will last you most of the day. You can top it up by plugging an external battery into its USB-C port and it recharges quickly, from flat to full in just over an hour.

The battery sadly isn’t removable, but DJI has told us that “DJI’s service centre will be able to replace the battery of older Osmo Pockets for a fee”.

As the name suggests, the DJI Osmo Pocket is incredibly small for a gimbal-stabilised camera, and by far the most compact we’ve seen.

It fits easily into your palm and comes bundled with a protective, rubberised cover, which promises to make it much more like a GoPro than the more awkward Osmo Mobile 2 for quick, off-the-cuff shooting. 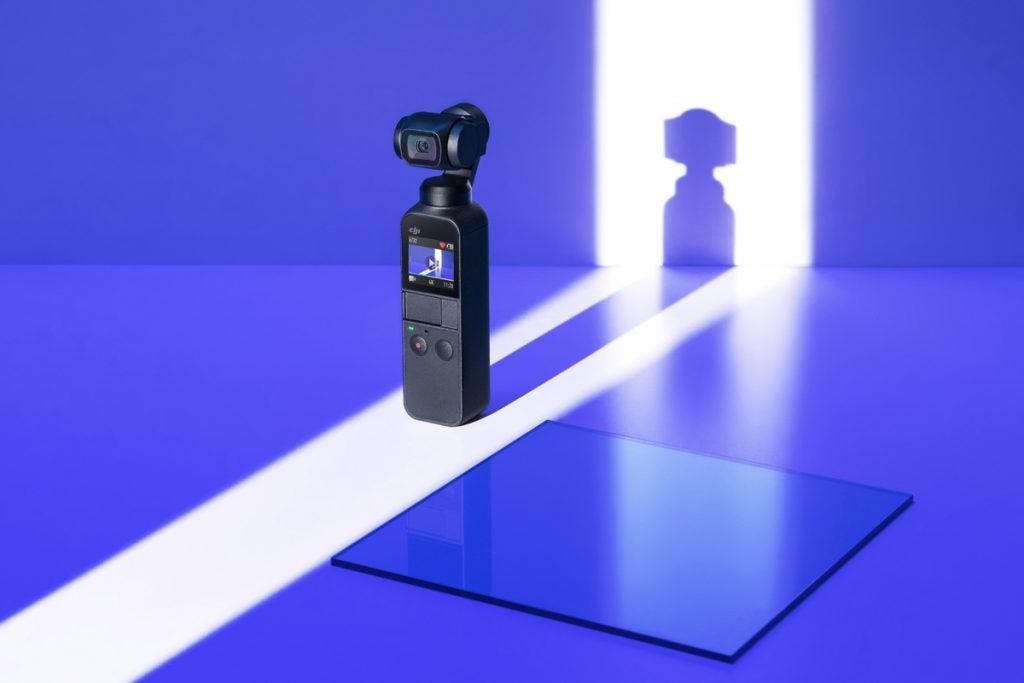 Above the record and power buttons, and below the little touchscreen, there’s a removable cover that lets you attach other accessories like a control wheel.

Unfortunately, there’s no tripod mount on the underside of the DJI Osmo Pocket, which seems like a strange omission. You’ll be able to remedy this with an accessory, though there’s no word yet on when this will be released and how much it’ll cost.

The Osmo Pocket already has eight confirmed accessories – some of these are available to pre-order now (with stock due in January 2019), but others still don’t have prices or release dates.

Here’s the full list with our hands-on thoughts of each one. Probably the most useful of the Osmo Pocket’s currently available accessories, this wheel gives you crucial manual control of the camera’s movement for both panning and tilting.

While you can turn the camera via your smartphone in DJI’s Mimo app, it isn’t always easy to maintain a constant speed or direction using the touchscreen d-pad. It’s just a shame the Controller Wheel isn’t included in the box.

Without this handy stand, it isn’t possible to wirelessly control or preview Osmo Pocket shots on your smartphone – you have to plug your phone directly into the Pocket via its included Lightning and USB-C connectors.

The Wireless Module is useful if you’re planning on doing lots of shots to camera and is also great for keeping the Pocket steady while you record motionlapses. The Osmo Pocket can stand up on its own without it, but it gives it some extra stability to stop it toppling over in the breeze.

While its price is a bit steep considering it’s essentially a piece of moulded plastic, the Accessory Mount is useful if you already have GoPro accessories that you want to screw the Osmo Pocket into. We’d probably only consider buying it as part of the Expansion Kit though…

This kit includes the three accessories above (Controller Wheel, Wireless Module and Accessory Mount), giving you a saving of £30 compared to buying them separately.

Like the ‘Fly More’ bundles DJI offers for its drones, it’s well worth buying the Expansion Kit if you can afford it – the extra functionality and control you get from the wheel and wireless module make a big difference to what you can do with your Osmo Pocket.

Marking the Osmo Pocket out as something for pros to consider, this pack of ‘Neutral Density’ (ND) filters help limit the amount of light coming into the lens to varying degrees.

This can be used to help lengthen shutter speeds for adding motion blur to videos or stills, or help cut down some of the flaring issues you can get in very bright conditions.

This very smart charging case helps keep your Osmo Pocket’s battery topped up if you’re out for a long day of shooting, while keeping your ND filters safely stashed away.

The downside is that it means the Osmo Pocket is no longer pocketable and there’s no obvious place to store your smartphone connector either. Still, it’s one to consider if you’re travelling and likely to be away from mains power for a while – for example, when hiking or camping.

Like shooting from high vantage points or over crowds? The Extension Rod connects to the Lightning or USB-C connector and gives you an extra 31 inches of reach, although there’s no price or release date for it yet.

One of the GoPro Hero 7 Black’s big advantages over the Osmo Pocket is that it’s waterproof without needing a case, but this accessory addresses that to an extent. The Waterproof Case can go to depths of up to 60m, although it’s fairly bulky compared to a GoPro.

The DJI Osmo Pocket is a very handy little sidekick for vloggers, YouTubers or anyone who just wants to take a step up from smartphone video.

The Pocket’s 4K camera itself isn’t spectacular, but the effects its gimbal and software let you create often are. Its stabilisation is superior to both the GoPro Hero 7 Black and flagship phones like the Google Pixel 3, while its vlogging modes and ability to track faces and objects make it very easy to use.

The downsides of the Osmo Pocket are that its built-in microphone is pretty average and it isn’t waterproof without a case, so you have to be a little careful in inclement weather. You may also have to invest in a couple of accessories to get the most out of it.

But the Pocket’s software and versatility are only going to get better from here and right now it’s a useful, unique camera for travelling, vlogging and boosting your social media production values.

What do you think, are you excited about the DJI Osmo Pocket and what would you like to see from it? Let us know on Facebook or on Twitter @TrustedReviews.