Planning on grabbing a copy of Ubisoft’s epic tactical shooter, The Division 2, but not sure where to start? Well, you’re not alone.

Tactical shooters are tough at the best of times, with The Division 2 no exception. The co-op focused open-world game throws all manner of challenges at you from the get-go.

Playing as a special agent attempting to protect and rebuild society after a cataclysmic biohazard ended civilisation as we knew it, you’ll have to deal with everything from raiders and cult leaders to drones and rogue dark-zone operatives.

If you want to succeed in this hostile environment then you’ll need to get things right from the start; rookie mistakes could haunt you later. We’re here to ensure that doesn’t happen. If you’re starting a new game of The Division 2, then the five key tips below will help you to hit the ground running.

1) Don’t be precious about your gear
The Division 2 may not feature gear that’s as exotic as that you’ll find in competing open-world co-op shooters such as Anthem and Destiny 2 – although we at Team Trusted are baffled at how excited some players (read, associate ed Jake Tucker) get about a new backpack – but making the most of your equipment early on is important.

It’s all too easy to become comfortable with a loadout you find right at the start and not bother upgrading to new kit. This is a huge mistake as, even if it doesn’t have glowing bits like Destiny’s swag, the weapons and kit are all very different and will directly affect how powerful your character is. Early on, the differences in quality is vast. At times, you’ll find five new weapons in the space of as many minutes, each more powerful than the last.

This is an intentional play by Ubisoft to get you familiar with the game’s stat system and various weapon types. Experimenting early on is a great way to find what does and doesn’t work with your specific play-style, while boosting your offensive and defensive capabilities.

Of course, on the flipside, if you’re rare marksman rifle is taking enemies down from level 2 to level 10, you do you.

2) Decide what role you want in your team
The Division 2 can be played stag, and early on it’s debatably easier this way. But, in general, if you want to make the most of the game then you’re going to want to play in a team. For the perfect experience play with people you know and with whom you’re happy to voice chat.

Whether you jump in solo or as part of a team, you’ll need to pick perks that complement the role you want to play. Most teams will benefit from having at least one anchor that can fortify and hold a position, distracting enemies in the process. Then you’ll want a marksman for stealthily taking out targets in the distance, and a tank to flank enemies and move your team’s position forward during firefights.

Different perks benefit different roles. Tanks will benefit from the Rainbow 6 Siege-esque riot shield. Your anchors meanwhile will benefit from having the drone perk, which can be used for offence or to heal allies, for example.

If you want to go lone-wolf, or even rogue later in the game, you’ll still want to take this into consideration and plan a load-out that works with your style of attack. Are you a trapper or sniper? These are important questions. 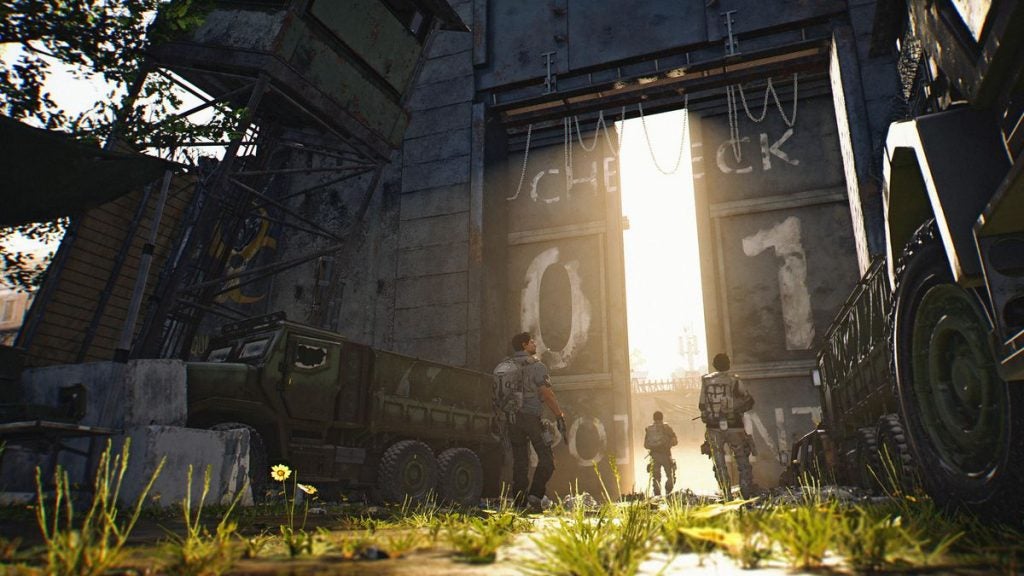 3) Explore, explore, explore
This may sound obvious, but it’s all too easy to rush through the early missions without taking the time to properly explore your surroundings. You don’t want to do this for a couple of reasons.

First, because it isn’t as fun. Massive Entertainment has done an amazing job of crafting The Division 2 world. The post-apocalypse cityscape looks gorgeous and is teeming with life. Round every corner you’ll find a new collectable, bit of kit to loot, bad person that needs to be put down, or civilian in need of aid.

Second, because the side missions are more important than you think. Helping civilians and completing side missions will lead to XP, kit and monetary rewards. Completing them will help you level up faster, giving you a wider, more enjoyable experience navigating the apocalypse.

4) Manage your swag
The Division 2’s crafting and inventory management menus aren’t the most fun part of the game, but you’ll want to use to them fairly regularly if you want to succeed.

Early on it’s all too easy to ignore your growing swag pile and rush mission to mission without forethought. Eventually, though, you’ll end up with a clogged inventory and be forced to manually drop or dismantle gear mid-game if you want to continue picking up new items. This is particularly troublesome if it happens mid-firefight.

It’s better to get into the habit of doing a clear-out whenever you get into a safe zone. As an added bonus, this will let you start collecting crafting parts and cash early on, which will become super-useful later in the game.

5) There’s no shame in retreat
At the start of the game your every impulse will tell you to go rushing into the open world without forethought. While exploration is important, it’s also essential to know when you’ve pushed too far.

From the get-go, areas of the game will feature high-level enemies who are tough to kill, even for experienced players. Once you unlock the dark zone, you’ll also have to watch out for rogue human-controlled agents that view low-level players as sport.

When this happens, there’s no shame in falling back to a safe house, collecting yourself and going elsewhere.

These are our 5 tips for people starting out in the Division 2. Think we’ve missed any? Let us know on Twitter @TrustedReviews