CES 2017 is just around the corner and we’re already gearing up to bring you news of next year’s newest flagship televisions boasting 4K HDR tech.

LG will be among those manufacturers vying for your flatscreen budget next year, but the company also has an offering for those considering ridding themselves of a TV completely.

The ProBeam HF80JA laser projector will go on show for the first time in Las Vegas next month and it’s so dinky and lightweight (2.1kg) that it won’t hog the entire coffee table and can be easily packed up to take round to a mate’s.

The 1080p projector comes loaded with the same webOS software you see on LG’s smart TVs meaning there’s streaming apps like Netflix, Amazon Prime and YouTube all built in.

It also has 2,000 lumens, making it entirely possible to use without drawing the curtains or waiting ’til nightfall. 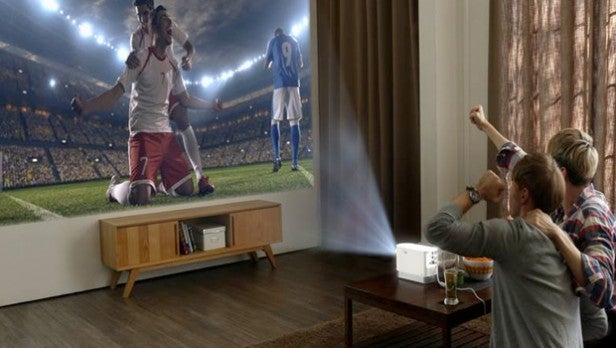 This model also boasts a technology LG is calling Sound Sync Adjustment, which should make sure you’re not experiencing any lag when connecting to Bluetooth speakers

As it likes to do these days, LG is offering a preview now ahead of the full reveal at CES 2017.

The company hasn’t released information int he number of inputs, price or availability yet, but we’re looking forward to going hands on with this at CES when the show floor opens.