One of Blizzard’s headline announcements at Blizzcon 2016 was the introduction of the new Necromancer class to Diablo 3.

Now if you’ve played Diablo 2, you’ll already be quite familiar with the concept of the Necromancer. As the name implies, it’s all about commanding legions of the undead, and using those unearthly skills to slaughter your way through Diablo’s seemingly unending waves of demons.

“The Priests of Rathma – or necromancers, as outsiders call them – have long remained shrouded in mystery,” explains Blizzard. “Deep within the jungle of Kehjistan, they train to preserve the delicate balance between the forces of life and death. Now Sanctuary has need of their unique power, and the Priests of Rathma will answer.” 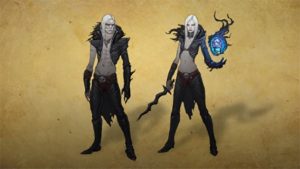 But while Diablo 3’s Necromancer is inspired by the Diablo 2 version, it’s more of a reimagining than a direct port. Many of the abilities are similar, but feature a number of reworks to adapt the gameplay to suit Blizzard’s new-gen title.

Now Diablo 3 players amongst you may think this is a curious move. After all, Diablo 3 already has the Witch Doctor class, which is generally seen as the spiritual successor to Diablo 2’s Necromancer. But Blizzard promises that the Necromancer is very different than the, specifically that gameplay is darker and “more controlled”. I’d argue that the play-styles don’t seem vastly different, but the Witch Doctor is fun, and so the Necromancer is fun too.

So with the new Necromancer, there are six core abilities, as follows:

Siphon Blood: Siphon the blood from your enemies dealing weapon damage as Physical and restores Essence. Siphon Blood heals you every second while channeled.

Bone Spear: Summon a piercing bone projectile that causes weapon damage as Physical to all enemies it passes through.

Blood Rush: Shed your mortal flesh and reappear yards away passing through most obstacles.

I had a chance to try out the Necromancer on a demo level at Blizzcon, using a PlayStation 4, so I got a good feel of what the class is all about.

Siphon Blood is the ability I found spamming the most; it’s generally easy to aim, offers good utility, and builds your Essence back up. The graphical effect of yanking blood out of your enemies is also pretty sweet. You’ve also got Bone Spear (again), which will drain  your Essence, but deals out serious hurt. It also passes through enemies, so the trick is to try and line up a bunch of baddies before you start unleashing your spear-y fury. The health restoration is handy too – I only had to use an actual potion once.

The most fun ability by far – and a returning one, it should be noted – is Corpse Explosion. It really does exactly what it says on the tin: cast it to blow up dead enemies, splattering the map with gore. Like Bone Spear, the idea is to stack up your enemies so that Corpse Explosion inflicts maximum damage. It’s also important to remember that the explosion will chain across corpses, so you can AoE (area-of-effect) a whole bunch of mobs down very quickly with some tactical Corpse Explosions.

Next up is Blood Rush, which is your main mobility move. It’s basically a teleport, but it’s got a cool graphical effect that sees you transformed into a fast-moving blob of gore – no complaints here. Despite feeling like the ejaculation of a swiftly jerked bottle of Heinz ketchup, Blood Rush looks and feels great. The cooldown is only a few seconds, so you can zip around the battlefield with relative ease. It’s mostly useful to zip around enemies so you can line up your Bone Spears better, but it’s also handy to move between packs of enemy mobs faster.

As you’d expect, the Necromancer is always flanked by a hoard of skeleton minions. I never had more than ten at any one time, and they’re a mix of both melee and caster fighters. You don’t really have much say over what they do, save for the Command Skeletons ability, which lets you redirect all of their collective attentions onto a single spot. This is handy if, during a major standoff, your skeletons start to become spread out. Ideally, you want them all taking down one foe at a time, and quickly, so you can get to spamming Corpse Explosion.

Finally, there’s Decertify, which is a simple AoE curse that reduces the movement speed and damage done of all affected enemies. It’s important to remember to pop this at the start of a fight, to reduce the damage you take. But the lowered movement speed also makes it easier to stack enemies up and whittle them down en masse.

The Necromancer is seriously fun to play, and it looks great on-screen. You’ll quickly layer the battlefield in demon gore, which feels very appropriate for the Diablo universe.

The abilities seem relatively balanced, but the Necromancer I was using on the demo wasn’t wearing high-level gear. With a full legendary gear set, I’d expect it would be very easy to mow down enemies at a startling pace.

My only concern is whether Necromancer feels different enough from the Witch Doctor to get Diablo 3 fans really excited. The game is now four years old, and there’s no shortage of criticism that it’s stopped feeling very fresh. I’m not entirely convinced adding a Necromancer was the way to revitalise the franchise, but it’s certainly fun to play, and that’s what really counts in the end.

The Necromancer is set to go on sale next year as part of the aptly named ‘Rise of the Necromancer’ character pack. You’ll need both Diablo 3 and the Reaper of Souls expansion – or the ‘Ultimate Evil Edition’, if you’re using PlayStation 4 or Xbox One. Pricing and exact release dates have not yet been released

Naturally we’re still a long way from launch, so there’s a very good chance the Necromancer I played at Blizzcon will be quite different to the final execution.

What do you think of Blizzard’s decision to introduce the Necromancer to Diablo 3? Let us know in the comments.