The Apple Watch might be just the thing to kick-start a wearable revolution, but some developers are struggling to whip their software into shape ahead of the launch.

According to the report, the biggest complaint is that the Apple Watch doesn’t handle the code for apps. Instead, the apps are run on a user’s connected iPhone, with relevant information then beamed to the watch’s display.

This means that, for instance, third-party apps will stop working if your watch is out of range of the iPhone 6.

“[Everything] feels like it’s a little bit choppy now.”

Currently, developers are having to render animations on the iPhone and send them over to the Watch, but it’s slow and clunky.

“You don’t have a guarantee on how fast that’s going to be delivered,” revealed Matt Bischoff, Tumblr’s iOS Engineering lead.

“We use animation to delight our users, and have meaningful transition between states. If you have to wait for Wi-Fi or Bluetooth, it’s not worth it.”

Another complaint was that you can’t just animate one area of the screen. An example of this would be animating a button in the lower left hand corner.

Some developers are also struggling to make good use of the touchscreen, which can only recognise basic gestures like swipes or presses.

Argodesign, the creator of the PEQ home automation iOS app, was hoping to create partner software for the Apple Watch. 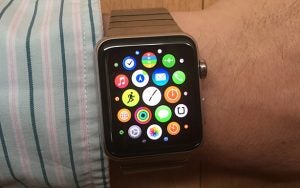 While users can drag fingers up and down on the iPhone to change temperature or dim lighting, the same gesture isn’t possible on the Apple Watch.

“I don’t know if Apple can’t technically do it due to processor speed, but I suspect, more or less, it wants people to interact with the phone differently. ,” explained Argodesign founder Mark Rolston.

“We have arrows you can use on the screen to tap as well, simply because that’s a carryover, but we’d like to do dragging, and it’s not possible right now. It doesn’t provide simple code for that.”

Despite being talked up by Apple at its launch event, doodling is also impossible for third-party app developers.

“A lot of what might be interesting is the doodling, the communications, anything you start from the watch,” said an anonymous developer.

“Even something like being able to doodle on your watch, being able to share those pixels to a server and have that be recorded, you can’t do that.”

Doudarev added: “I’d love to see someone using some kinds of touch gestures that are custom to send messages under the table at a meeting.”

“That’s one of those ideas that, if it was possible, it’d be great. But .”

Apple’s own apps have this feature available to them however, which means it will be tough for third-party developers to compete with the tech giant on the software front.

There’s also the issue that developers can’t code watch faces like they can for Android Wear. That’s a shame, because watch faces will be the way most users primarily interact with their device.

“I’m not sure people are going to be launching that many apps through the day on their watch. It’ll be about the notifications, the glances, and the watch faces,” explained Bischoff.

“If someone’s obsessed with Tumblr, I want them to have a Tumblr watch.”

The Apple Watch was made available for pre-order on April 10, although devices won’t begin shipping until April 24.