It’s been just a week since the Destiny release date, which saw Bungie’s game break the records for the best-selling new IP launch ever.

The reviews have been slow to come in, thanks to a late review copy release to gaming sites and reviewers wanting to give the game as many hours as possible before making a verdict.

Well, the industry has started doling out its final impressions of Destiny and to be honest, it doesn’t look like the game is living up to the hype.

We said that while “Destiny has its shortcomings, the overall experience is just a whisker away from living up to the hype” and gave it a rather respectable 8/10 with the Editor’s Recommendation.

“It doesn’t have the breadth or depth of a proper MMORPG and it remains to be seen whether Bungie’s promise of a rich and long-lasting endgame holds any water. Yet by combining and addictibe FPS action with some of the trappings of an MMO, Bungie has forged a horribly compulsive hybrid and once Destiny has its teeth in you, it’s really, really hard to break.”

“The storytelling sometimes falls flat while the missions can grow formulaic, but no other shooter works so well as a shared adventure, or gives you quite the same feeling of ownership over your hero.”

We’re rounded up the Destiny reviews to give you an overview of what the gaming industry thinks about Destiny. 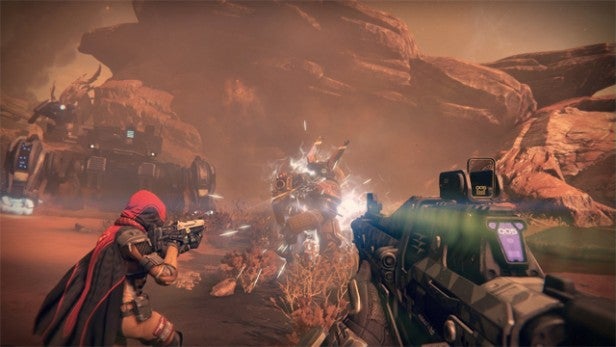 Metacritic – 75 Metascore on PS4 and a rather average 6.4 from user reviews, meaning mixed or average reviews based on the ratings received.

CVG – “Big, beautiful and dangerous, Destiny will keep FPS fans happy for months to come. Yet its feeble story and safety-first approach means it can’t help but feel slightly underwhelming.”

OXM – “Not quite the epic journey into the unknown we were hoping for, mostly thanks to poor writing and a reliance on XP farming, but a treasure trove of single and multiplayer adventures nonetheless.”

GameTrailers – “Next to Halo 3, Destiny’s story is thin, vehicles
are average, and arsenal is uninspired. Up against World of Warcraft,
Destiny’s quest system is repetitive, open world is sectioned off, and
list of dungeons can’t possibly compete. But World of Warcraft never
looked this good, and Halo 3 didn’t reach this level of synergy between
PvP and PvE.”

Guardian – “People say World of Warcraft only gets good after 50
hours, but this isn’t World of Warcraft. This is supposed to be the
future – and many gamers won’t make it that far through this dryly
earnest narrative universe; a universe that amazes us at times, but
regards us with clinical abstraction.”

Wired –  “Destiny doesn’t quite live up to the hype, but that
it’s as enjoyable as it is in spite of those impossible expectation
speaks to its overall quality.”

Metro –
“It’s not short of spectacle but in terms of innovation and variety
this is nowhere near as forward-thinking as Bungie would like to
pretend.”

Polygon – “For all the wonder of its presentation, the swelling potential suggested by its (excellent) score and the basic foundational strength of its controls, Destiny often feels like a collection of its influences’ biggest problems.”

GameSpot – “Once the final, hackneyed closing scene finishes, Fire Team members are awarded the same weapon, regardless of class, and a handful of currency. This reminder of how wholly unspecial you are is the big finale of a lavishly produced but troubled game that excels in the basics but lacks creativity at heart.”

Giant Bomb – “Destiny is a beautiful but hollow experience with most of the pieces you’d expect from a great multiplayer shooter. It just can’t find a way to fit them all together.”