Denon has launched yet another soundbar in the DHT-S416, which is the first in its range to feature built-in Chromecast.

Denon has announced its first soundbar with built-in Google Chromecast in the Denon DHT-S416 (£299), another addition to its rather large roster of soundbars in 2020 that includes (deep breath) DHT-S216, DHT-S316, DHT-S516H and DHT-S716H.

Don’t expect object-based audio from this speaker as it’s just a 2.1 effort. It stands at 5.6cm tall, which should mean it can slide underneath most TVs (particularly ones with a stand). Housed inside its slim frame are a pair of 1.25 x 4.4-inch full range drivers and two 1-inch tweeters, with the wireless subwoofer home to a 5.25-inch driver contained in a ported enclosure for added bass extension.

With Chromecast supported out of the box the soundbar can stream hi-res audio over Wi-Fi from services that include Amazon Music HD, Spotify, Tidal, Qobuz, YouTube Music. There’s also the possibility for voice control with Google Assistant via an external device. And what’s more a multi-room set-up can be created with other Chromecast-enabled speakers. 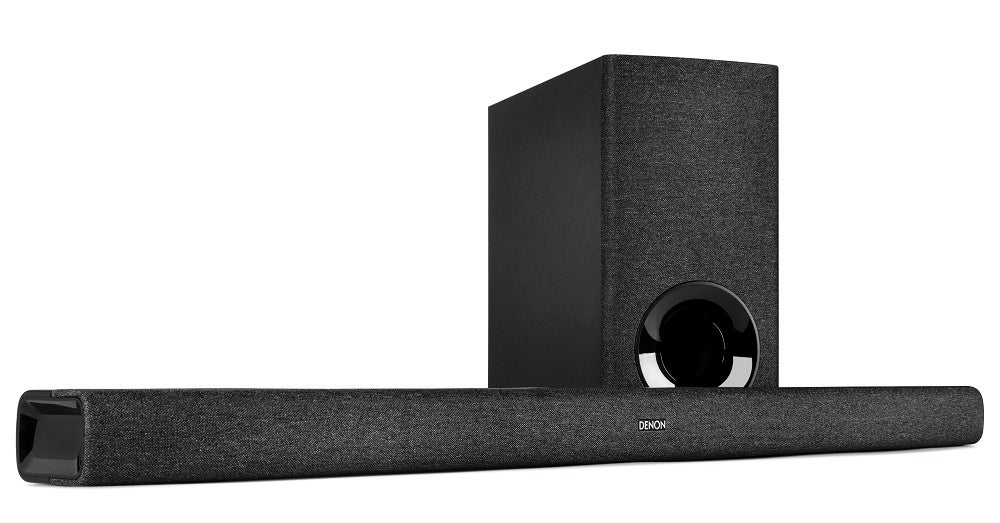 Denon says it’s designed the DHT-S416 to be easy to set-up and use. The soundbar supports wall-mounting and features a HDMI ARC (with CEC support for control with the TV remote) and an optical input. Bluetooth is included for wireless pairing to other sources.

Denon claims that the soundbar’s advanced acoustics and precise tuning can “realistically simulate a multi-channel soundtrack” as well as deliver “outstanding playback” with music sources.

There’s three EQ presets to choose from – Movie, Music, and Night – and the DHT-S416 has three Denon Dialogue Enhancer modes for improved clarity with speech from TV broadcasts. Denon’s Pure mode also aims to eliminate surround processing by removing any audio characteristics/artifacts for a cleaner sound.