Dell has launched its most powerful XPS 15 Ultrabook to date, alongside a nifty new special edition Inspiron 7000 2-in-1 and duo of AIO desktops. Get all the key details on the new products below.

From a distance, the XPS 15 may not look like much of an upgrade. Unlike the new XPS 13 – which we’re currently reviewing – the XPS 15 has an identical chassis to its 2017 predecessor.

Inside, however, it’s a completely different beast. Key upgrades include Intel’s new 8th-gen CPU and the addition of a GTX 1050 Ti graphics card option.

Although 8th-gen doesn’t offer the most significant performance upgrade, the inclusion of a new H-series core i9 CPU option plus the upgraded 1050 Ti GPU could make the new XPS 15 an enticing option for creatives and gamers.

The i9 was unveiled by Intel alongside the new Dell laptop, and will reportedly offer a 41% gaming frame-rate increase and 59% faster 4K video-editing speeds against the top-specced 7th-gen Intel Core i7. The 1050 Ti is also a nice step up on the regular 1050, and can play most games at Full HD.

We haven’t had an opportunity to benchmark any i9 laptops just yet, but if there’s even a modicum of truth to those performance claims then the new XPS will be a nice step up on the 2017 model – which wasn’t a slow-poke to begin with.

To further boost performance Dell has raised the maximum memory to 32GB of RAM and also loaded the laptop with a “more power-efficient” 4K, InfinityEdge panel. Dell claims the panel will see the XPS 15 survive more than 20 hours of mixed use off a single charge.

Side from the specs mentioned above, elsewhere things remain pretty similar to the 2017 XPS 15.

You’ll be able to pre-order the new XPS from Dell’s website from April 16. 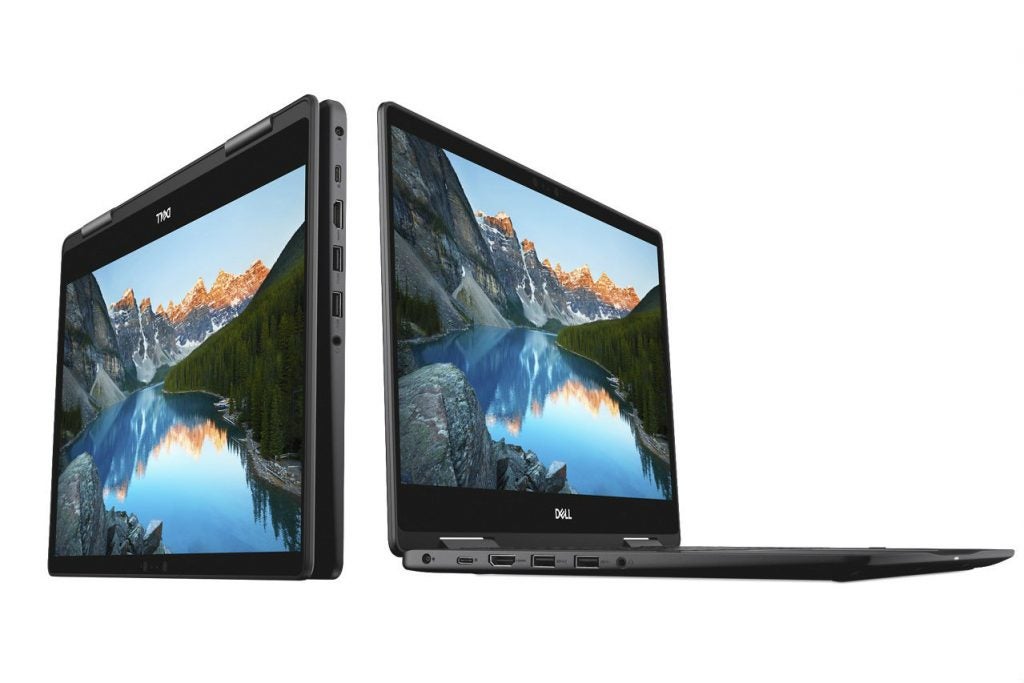 Dell Inspiron 7000 and AIO Desktops: Should Apple be worried?

The Inspiron 7000 is a top-end convertible that aims to offer Ultrabook-level performance and features, coupled with a foldable 360-hinge design similar to Lenovo Yoga laptops. This setup allows you to turn the laptop into a tablet and it will be supplied with a Dell Active Pen stylus.

The device will be available in 13-inch and 15-inch versions. Specs-wise, despite being in Dell’s lower tier Inspiron line, both devices are on a par with many top-end Ultrabooks, including the Huawei MateBook X Pro, Surface Pro and MacBook Pro.

Highlights on the Inspiron 15 7000 include high-power Intel H-series Core i7 CPU and GeForce MX130 discrete graphics options. Dell claims that, coupled with the Inspiron 15 7000’s 4K UHD IPS touch display and active stylus, the laptop will be the ideal choice for creatives looking for a mobile workstation.

The 13-inch model features AMD rather than Intel tech. Buyers will be able to load the Inspiron 13 7000 with a choice of Ryzen 3 2200U, Ryzen 5 2 500U and Ryzen 2700U mobile CPUs. Elsewhere, specifications are slightly downgraded on the 15, with a smaller 13.3-inch, FHD resolution touchscreen and a bottom 4GB of RAM option.

The AIO line of all-in-one desktops rounded off Dell’s April launch of non-gaming products. The Dell Inspiron 27 7000 AIO is at the top-end of the new line and is the only model to feature a near-bezel-less 27-inch InfinityEdge 4K display option.

The 5000 is a minor downgrade that will present buyers with a smaller 23.8-inch, FHD screen. Both models will be available in a wealth of 8th-gen Intel CPU options, and offer the space for a GTX 1050 GPU and 32GB DDR4 RAM.

Excited about the new XPS 15, Inspiron 7000 or AIO desktops? We certainly are. Make sure to check back later for Trusted Reviews in-depth review of the new Dell XPS 15 Ultrabook. In the meantime, share your thoughts about the refreshed laptop on Twitter @TrustedReviews