We’re expecting to see Google’s new Pixel 3a and Pixel 3a XL phones shown off at the tech giant’s annual I/O developer conference next week. Ahead of this, a prototype has made its way onto Geekbench.

Geekbench is a mobile benchmarking tool that adds scores to its online database. Therefore, savvy folk keeping an eye on the database can occasionally spot new phones before they’ve broken cover.

Which is exactly what’s happened here. A prototype version of the phone has been benchmarked, and now we can get a glimpse of what the 3a might be packing beneath that white exterior.

Some of the stuff is by the numbers: the phone runs Android 9 Pie, and it’s powered by a Qualcomm chipset, although the Geekbench listing is short on exactly which board is powering the phone, although speculation has suggested it could well be a Snapdragon 670, based on the figures.

Here are the specs from Geekbench, found by MySmartPrice. RAM is a little on the low side, with 4GB, however this is the same as is packed into the Pixel 3 and its XL big brother and they certainly feel snappy enough in use, so this isn’t reason enough to discount the phone. 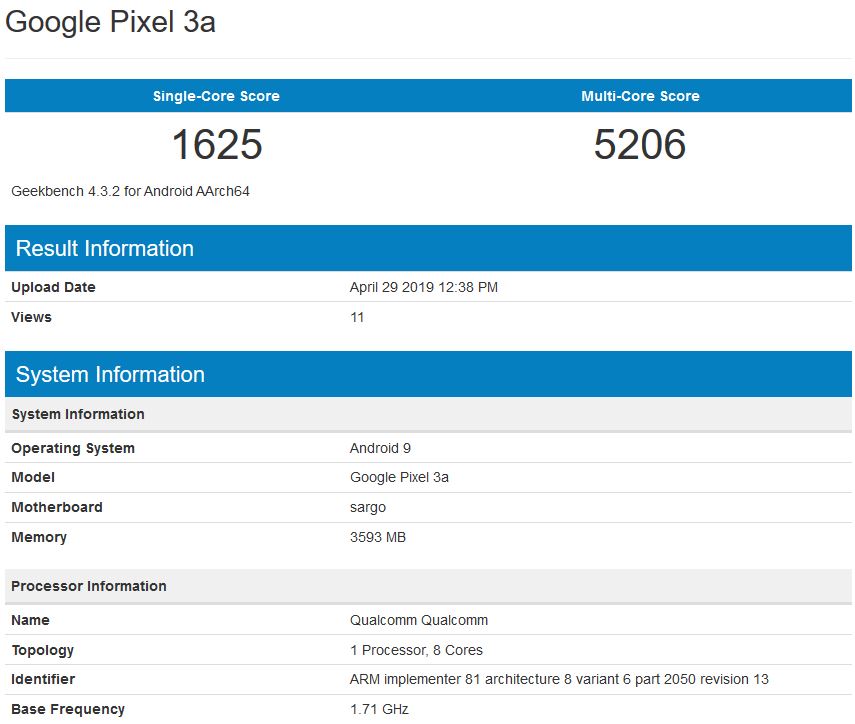 While Geekbench only shows off what is inside the phone, Previous reports have suggested that it’s been said that the Pixel 3a will have a resolution of 1080 x 2220, with a size of around 5.6″.

A multi-core score of 5206 is a fair way short of the best performing phones, and it positions the Pixel 3a as a very mid-range entry into today’s smartphone market. However, the Pixel is in the privileged position of getting the best and most exciting of Google’s features first. Add to this the Pixel’s remarkable camera, and there are plenty of reasons to be excited about what Google have to show us come Google I/O on May 7.

Still fancy getting your hands on a Pixel 3a? Let us know on Twitter using @TrustedReviews.