Google’s vision for the future of VR took centre stage at I/O 2017, but what’s it all about? We take a closer look at Daydream VR. Here’s everything you need to know, including all the latest news on which phones and other devices support Daydream VR.

Google’s stepping up its VR game in 2017 – and no, we’re not just talking about Cardboard.

At Google I/O 2016, the company unveiled an intriguing new VR project called Daydream, and it’s quite unlike anything we’ve seen elsewhere.

Now, the Mountain View-based company has revealed plans to build standalone Google VR headsets – the first of which will be developed in partnership with HTC and Qualcomm – as well as expanding Google Daydream support to devices like the Galaxy S8 and Galaxy S8 Plus.

What’s more, we can expect to see a load of new Daydream-ready devices before the end of the year according to Google CEO Sundar Pichai.

Here’s all you need to know about Google’s VR plans.

What is Daydream VR?

In and of itself, Google Daydream isn’t a physical, standalone VR device – though Google does make its own headset for use with Daydream-ready smartphone, the Daydream View (more on that later).

It’s a platform with a set of VR hardware standards for manufacturers to follow, which combine with a new piece of hub software from Google itself. 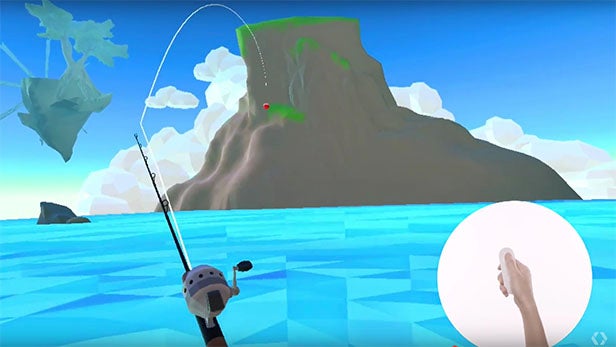 Google Daydream won’t just provide yet another VR platform in an increasingly fragmented market. That’s not the point. Rather, the intention is that it will pull together all of the content that already exists in some form on the internet.

The hardware side of things includes a set of guidelines for a VR headset and a motion controller, both of which Google has now revealed it will be manufacturing with help from HTC (of HTC Vive fame) and Qualcomm, whose Snapdragon 835 SoC will sit at the heart of the first standalone Google VR headset.

At present, the following handsets are compatible with Daydream VR:

However, in an earnings call in July, Google CEO and board member of parent company Alphabet, Sundar Pichai, revealed more devices will be added to that list soon.

In fact, according to Pichai, we can expect to see 11 smartphones arriving with full Daydream support before the end of the year – leaving us to ask, what’s number 11 going to be?

All of the above phones are pretty much confirmed, which has us wondering whether Daydream VR support will land on the forthcoming Galaxy Note 8 phablet, come to a previously released Moto device like the Moto G5 Plus, or shock us all and launch with the iPhone 8?

The latter phone seems like a very remote possibility indeed, but at the very least, we now know Daydream is coming at least one device we weren’t expecting this year. 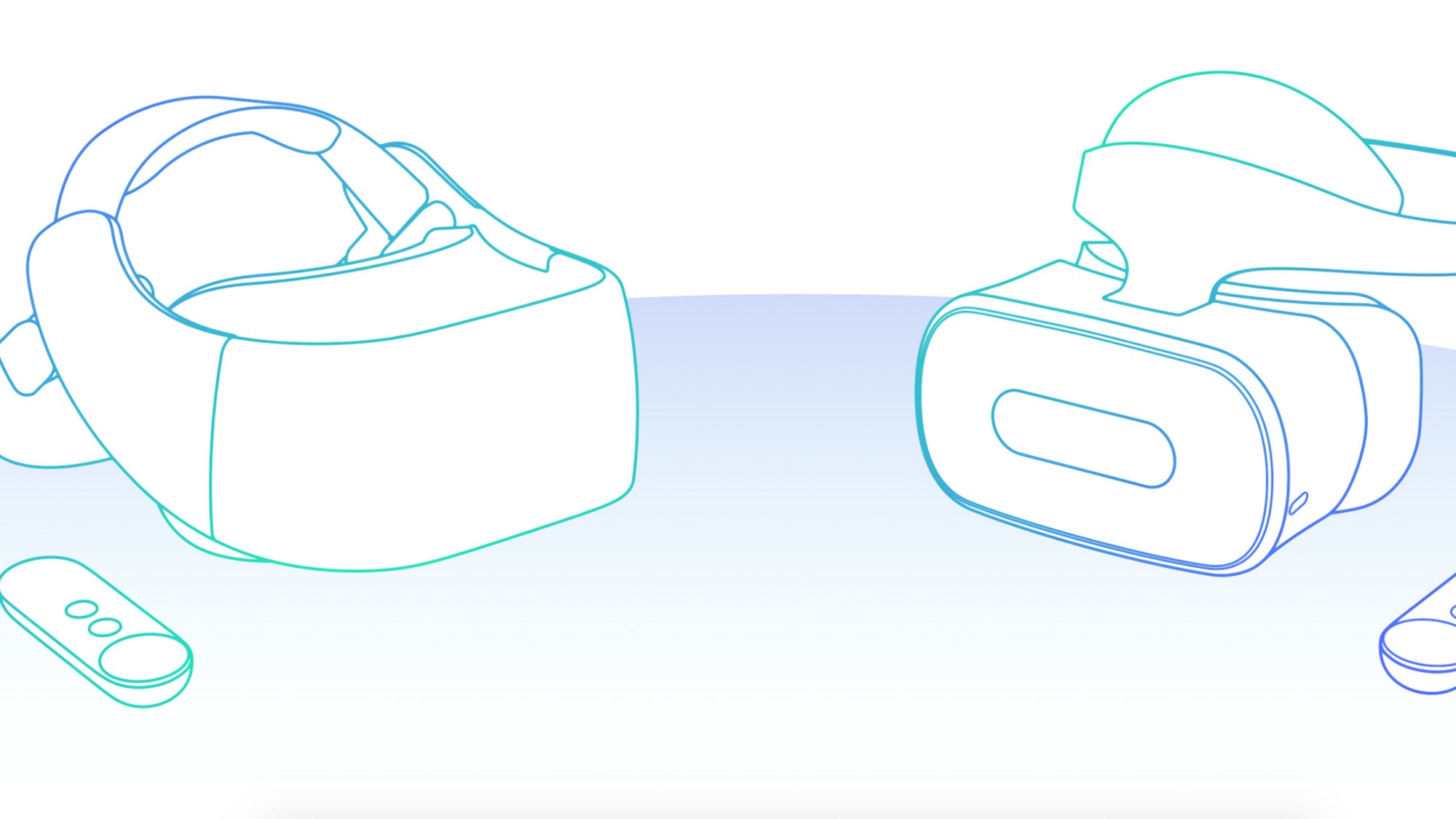 No doubt included in that list are the forthcoming Pixel 2 handsets, but it seems we can expect some as yet unannounced devices to crop up, too.

As mentioned, Samsung will be adding Daydream support to its Galaxy S8 and S8 Plus, and we’d expect the forthcoming Note 8 to also feature the same functionality.

Motorola may even opt to provide support for Google’s VR system on its upcoming Moto Z2 and Moto Z2 Force.

At this point, nothing more has been confirmed so we’ll have to wait and see what arrives in the coming months.

Google announced the first Daydream VR headset, the Daydream View, back it 2016. It’s made from breathable material, which Google says was inspired by what we wear.

It comes in three different colours, including slate (grey), snow (white) and crimson (red). Like Gear VR, you slot your phone into the headset and use a provided controller to interact with games and other content. 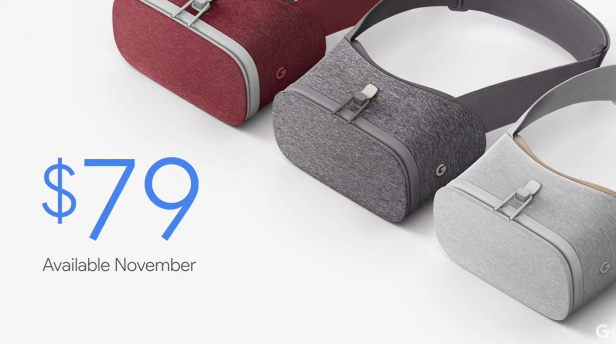 In addition to a headset, Google is also offering a reference design for a remote control device, one of which must ship with every Daydream headset. It looks a bit like a Roku or Apple TV remote, but it has motion sensors built in.

Thanks to this feature, the remote responds to your hand movements much like a Wii remote does. In this way the Daydream moves slightly beyond Samsung Gear VR – which relies on awkward physical headset controls for navigation – and closer to the territory of the Oculus Rift and the Vive. 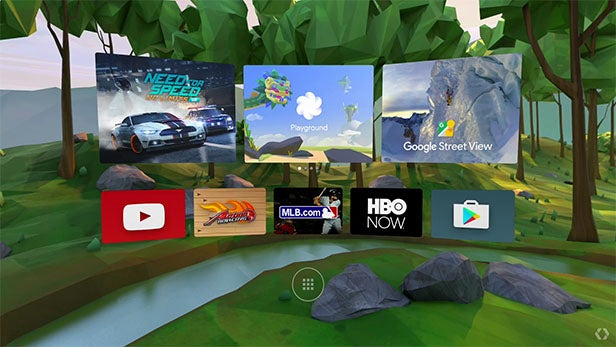 It’s used in navigation of the Daydream UI to physically point to and select content, and can also be used to pan through 360-degree video content when you don’t want to physically spin around.

Daydream isn’t just about the headset and controller, of course. There’s also a dedicated Daydream Home UI, which will enable you to browse and boot up VR content in a nice interface. It’s a bit like the Oculus VR app.

It also includes a tweaked version of the Google Play Store to provide VR content, complete with 360-degree preview images. You can find the likes of Google Photos, YouTube, and Gunjack VR in there. 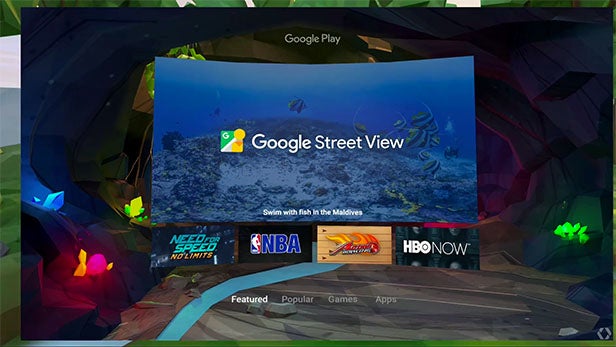 Google Street View and Play Movies is also present, and there’s support from Ubisoft and Electronic Arts on the gaming front.

Google has also said it will enforce strict standards on the quality of the sensors and the speed of the display’s refresh rate.

Related: How to turn your smartphone into a VR headset

Are you excited for standalone Google VR headsets? Tweet us @trustedreviews.