iPhone 6 rumours look set to be kicked into overdrive as leaked images of the handset hit the web with an all new, curved edge-to-edge display hosting design on show.

In keeping with recently revealed Apple patent applications, the newly leaked iPhone 6 pictures show off a claimed prototype handset which has done away with Apple’s traditional physical home button in favour of an edge-to-edge display. A move recently tipped to be on Apple’s agenda, the redesign would help the Samsung rival offer larger on-screen real estate without dramatically increasing the handset’s form factor.

The images, which have appeared courtesy of GSMArena, show a handset considerably thicker in the middle than its extremely thin edges with the convexed, curved nature of the display paired with a virtually bezel-less design that would be sure to appeal to many.

A leak that we advise is taken with a considerable pinch of salt, the latest reports have suggested the insider responsible for bringing the handset to light couldn’t vouch for the device’s validity, although it has been suggested it could be one of a number of prototype designs Apple is currently testing for the eagerly awaited iPhone 6. 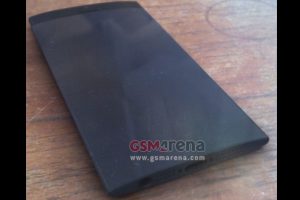 iPhone 6 Rumours
Although expected to be preluded this year by the iPhone 5S, a device widely expected to largely resemble the iPhone 5, recent iPhone 6 rumours have suggested the handset could enter the realms of reality in 2014 with an all new design in tow.

Tipped to be Apple’s next big direction change for its flagship smartphone offering, the iPhone 6 specs sheet is expected to be complimented by a raft of high-end innards, with the likes of an eight-core processor and a larger, more detail display already tipped for inclusion.

Whilst Apple has remained impressively tight-lipped about its upcoming handsets, further iPhone 6 rumours have mooted that the future device could land in “6-8 colours”.

Next read our review of the iPhone 5C