It might not be Life is Strange 2 (that’s not due to be announced for another couple of months) but The Awesome Adventures of Captain Spirit is every bit the same charming narrative focussed experience.

The game, which will be made available for free on the 26th of June, tells a story that as yet seems completely unconnected to what we saw in Life is Strange and its Before the Storm prequel, but its structure couldn’t be more similar — if a little shorter at around two hours.

You play as Chris, a lonely 9-year old who’s trying to keep himself entertained in an isolated cabin on a snowy hillside. His mum isn’t around anymore (whether she’s died or just moved away is unclear), and his dad has taken to drinking early in the day before collapsing in front of the TV to deal with his loss.

Captain Spirit might be a childlike game (in fact, each of your objectives are scrawled on a menu as though drawn by Chris himself), but it’s far more mature than a lot of titles announced at this year’s E3 with their gore and adult language. 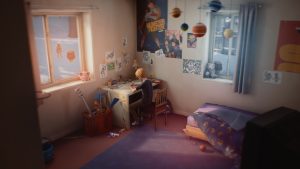 Captain Spirit Gameplay Preview – What’s it like to play?

We were treated to an extended gameplay demonstration at the show in which a member of the development team played through the game’s early sections.

Make no mistake, this is a Life is Strange game. It’s very slow-paced, and if you’re not here for its story and characters, then there’s little in the way of difficult puzzle-solving to keep you entertained.

Instead, you’ll progress through the game by picking your way through branching dialogue trees, and exploring your environment for the items you’ll need to complete your objectives. 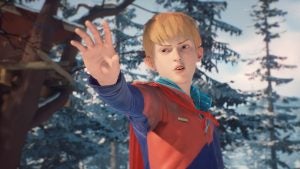 We didn’t get a chance to see how the game’s narrative would diverge based on which dialogue options we chose, but each of the dialogue choices given to our presenter felt natural and fluid, and even though the game was attempting to deal with difficult topics, it didn’t feel too heavy handed.

The titular Captain Spirit is an imaginary superhero that Chris in his loneliness and boredom has invented (as the player you’ll get to choose the specifics of his costume). At various points throughout the game you’ll find this imaginary world creeping into the real world.

One objective asked Chris to go and tame a ‘Water Eater’, which saw our protagonist overcome his fear of the dark utility room in order to ‘tame’ the monster that appears. In actual fact, this monster is nothing more than a misbehaving water heater, but it’s Chris’s childlike fear of darkness that builds it up into a mythical beast that’s shown to the player. 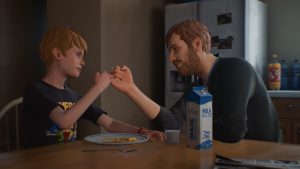 Square Enix’s decision to release the game as a free standalone experience is an interesting one. It seems clear that the game is going to build up to you confronting Chris’s and his Dad’s grief at losing their mother and wife respectively by using the Captain Spirit alter-ego to discover an inner bravery.

Perhaps the free price is Square’s attempt to make the game available as a therapeutic release for children that have experienced something similar — although the company hasn’t explicitly confirmed any such intention .

Alternatively, the game works nicely as a teaser for what’s to come in Life is Strange 2. It uses the 4th generation of Unreal’s graphics engine (an upgrade over the original’s Unreal 3), and hence has much more fidelity to it than the previous games, helped by a bright and cartoony art style that’s now crisper than ever. 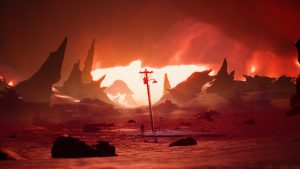 With the Captain Spirit being set in the same universe as the mainline Life is Strange games, there’s also a chance the original characters might make an appearance, as suggested by a brief glimpse of a letter we got to see as Chris was hunting through his dad’s garage.

Whatever the thinking behind this bite-sized release, it’s hard to argue that it’s not great value as a free release. It’s slow pace and innocent sensibilities won’t be for everyone, but anyone who’s emotionally connected to the Life is Strange universe should have little to loose by giving this two hour experience a go — although we’ll have to wait for the full release to find out for sure.

Will you be giving Captain Spirit a try when it comes out at the end of this month? Let us know @TrustedReviews