The Canon EOS RP is a more affordable alternative to the EOS R. And, for some at least, it should prove much more interesting as it’s not just slightly cheaper. It’s a lot cheaper.

There are cut-back parts in almost every area, but as this is still a full-frame camera, its image quality will still be excellent with the right lens.

If you’re familiar with Canon’s DSLRs, you can think of the EOS RP as the 6D Mark II to the EOS R’s 5D Mark IV.

That’s a lot of spare change to go towards lenses. Or your rent. But does it cut too many corners? Here’s how it compares to its more premium sibling.

A lot of this comparison is going to focus on the ways the Canon EOS RP isn’t quite as good as the EOS R. Still, there is a real appeal to the RP’s frame. It is significantly smaller, particularly in height and depth.

You lose some of the classic DSLR styling of the EOS R as a result, but the dimensions are much closer to those of the Sony Alpha A7 III. And who doesn’t like a camera that is easy to carry around? It’s also much lighter than the EOS R, at 485g to 660g, with battery and SD inside.

Canon made the EOS R with a deliberate through line from EOS full-frame DSLRs. And with the EOS RP, it strays from the classic design just slightly more. 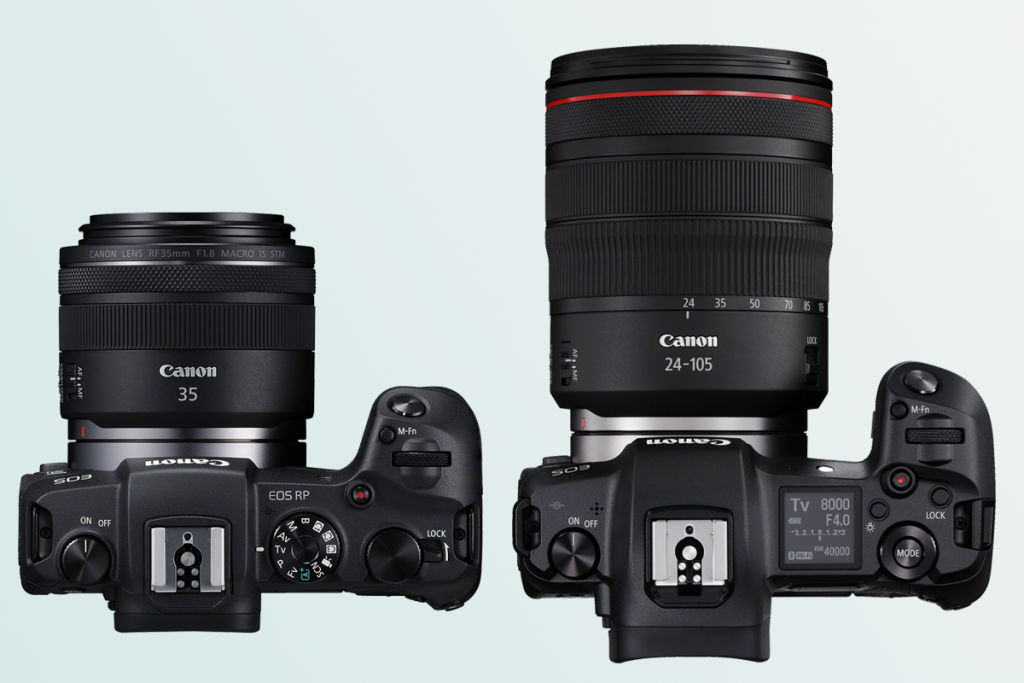 The controls are slightly different too. The EOS R has a programmable Fn touch bar that is easy to operate with a thumb, if not exactly essential. The EOS RP does not. Its other controls and top plate are a little closer to those of a lower-end, or at least more accessible, camera too. It has a traditional mode dial, and no top LCD display.

If you currently use an entry-level DSLR or a compact camera, you should find the Canon EOS RP easier to slide into using. You don’t miss out on weather proofing or build fundamentals either. Both have weather-sealed bodies with a magnesium alloy shell.

The EOS R has a much better USB interface, though, with USB 3.1 to the RP’s USB 2.0. Version 2.0 tends to offer real-world max transfer rates of around 33MB/s, which will seem slow if you want to move over a lot of files from a fast SD card.

The Canon EOS RP doesn’t give you quite a good preview of your images as the EOS R. Its viewfinder and rear LCD are less sharp.

This isn’t quite a case of “standard definition” versus “4K”, but the EOS R will give you a sharper, preview image. Both displays have fully articulated touchscreen displays on the back, though, so the basics are similar. 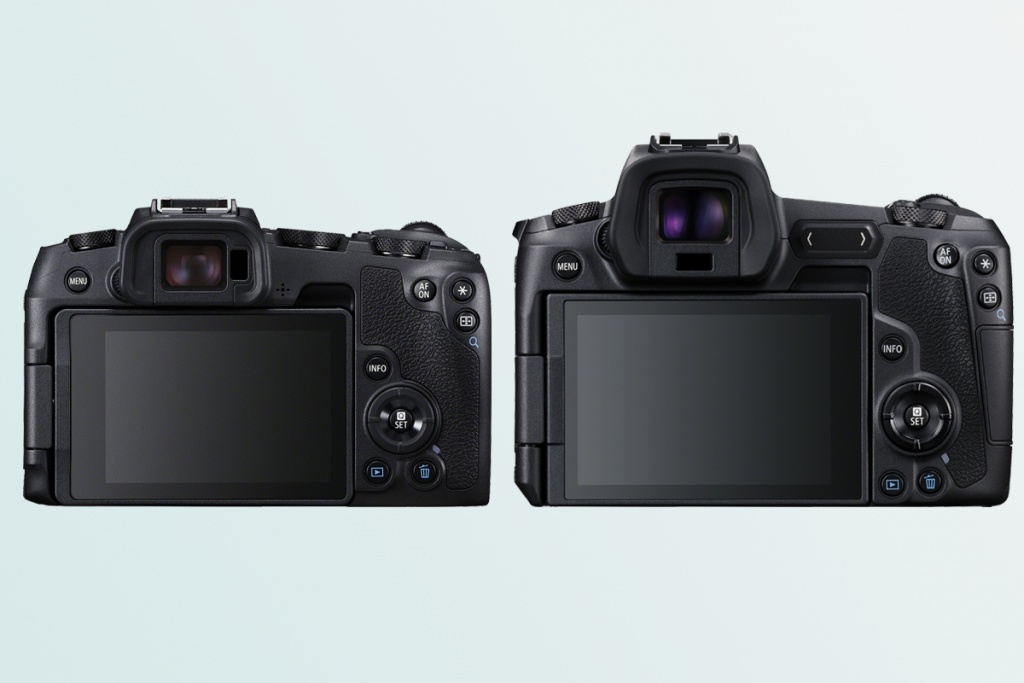 These cameras have full-frame sensors but the EOS RP’s is slightly lower-res than the EOS R’s, at 26.2 megapixels to 30.3. Canon has confirmed the RP uses the same sensor as the EOS 6D Mark II.

The EOS R’s is much closer to the EOS 5D Mark IV’s sensor. That comparison also more-or-less sums up the relationship between these two mirrorless cameras: it’s similar to where the 6D Mark II sits in relation to the 5D Mark IV. Neither camera has in-body stabilisation.

Native ISO sensitivity is exactly the same too, at 100-40,000. Lower resolution sensors will often allow slightly higher native settings, but here the res difference is fairly minor. And Canon is unlikely to want to establish any areas where the much cheaper camera seems on paper to outperform the higher-end one. 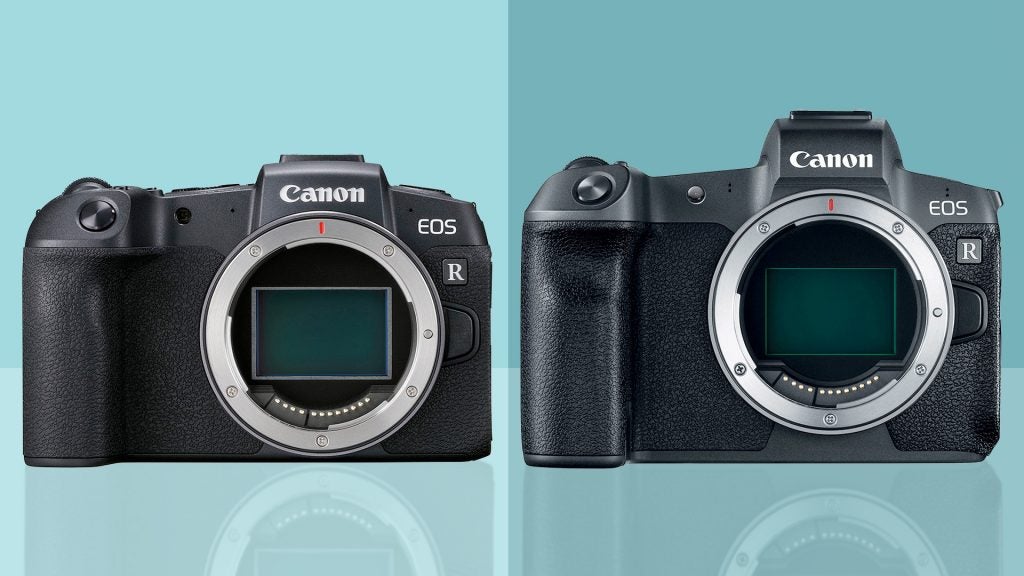 Autofocus style is at least very similar in these two cameras. They both have Canon’s Dual Pixel AF, which uses a pair of photodiodes in the sensor pixel to judge focus by phase detection.

The number of focus points changes, at 4,779 to 5,655. This is almost proportional to the difference in resolution, though, which makes sense. These points cover the entire vertical area of the scene, and 88 percent of the horizontal, just like the EOS R’s.

Canon claims the EOS R’s AF works in even darker conditions than the EOS RP’s, at -6EV instead of -5. This suggests the sensor is more advanced, which is not surprising given we already know the EOS R outclasses the 6D Mark II.

Both cameras have not just face detection, but eye tracking too. And Canon claims 0.05 second peak focusing performance for both too.

Considering they also share the same DIGIC 8 processor, according to Canon’s documentation at least, you might expect burst performance to be similar. However, it’s one of the clearest ways they deviate.

The Canon EOS R shoots at 8fps with the focus locked, and 5fps with the servo set to keep focus on your subject. 5fps is the Canon EOS RP’s peak, dropping to 3fps with mid-shoot refocusing.

Neither of these is a sport shooter camera, but the EOS R has roughly two generations’ worth of speed improvement. The shutter can fire faster too, with quickest shutter speed of 1/8000 in the EOS R and 1/4000 in the EOS RP. Yet again, this matches the Canon EOS 6D Mark II.

There’s already some scope for this to become a relevant issue, as the first lenses in the EOS R family have wide apertures. The EF 50mm f/1.8 STM and EF 85mm f/1.4L IS USM will eat up that shutter speed on a bright day when shooting wide open. 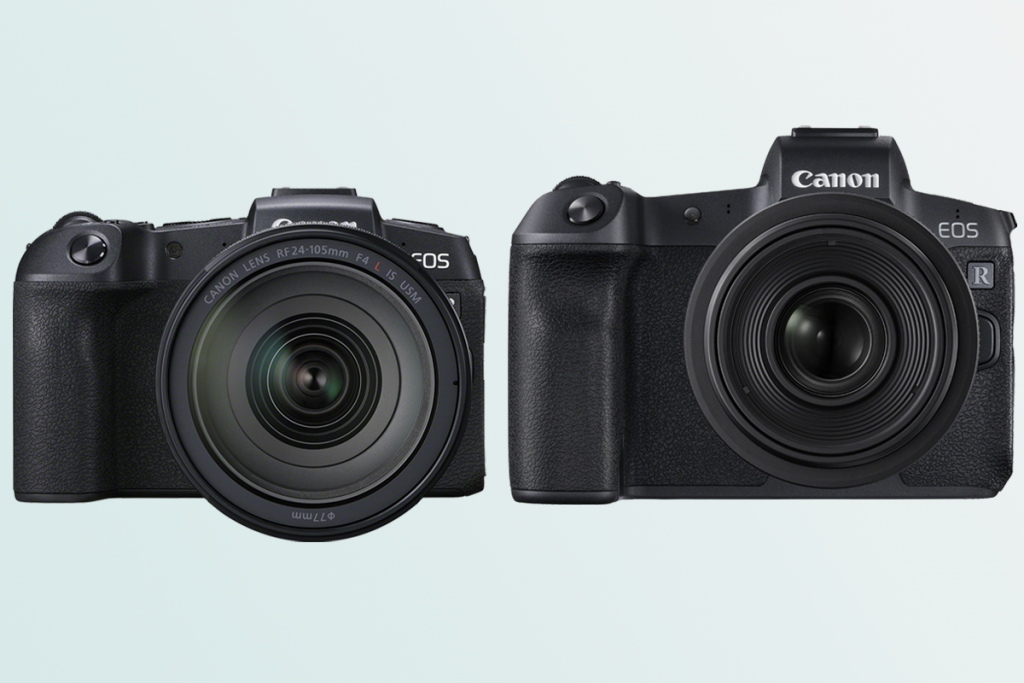 The Canon EOS R versus RP debate is one of the “high end” versus the accessible. You see this in the approach to video.

Canon’s cheaper camera loses out on most of the big features semi-pros and production-focused YouTubers will want. There’s no 30fps 4K capture, or high frame-rate shooting. 25fps is the cap at 4K, 60fps at 1080p.

You miss out on C-log too, the “flat” Canon format designed to let you grade colour yourself. It also results in higher dynamic range. The EOS R has 10-bit 4:4:2 capture over HDMI, another part the EOS RP lacks.

Still, it would also be unfair to say the EOS RP isn’t made for some video shooters. It still has a mic input. It still has a headphone jack for audio monitoring, and Digital IS for smoother handheld footage. All the extras, considered essential by some and that go completely unused by others, have been removed.

One feature that affects everyone: the EOS RP has a significantly worse battery life, rated at 250 shots to the EOS R’s 350 shots (according to the industry standard rating). You only have to look at how these cameras are built to understand why, though. The battery lives in the camera grip, and this is the part most aggressively slimmed-down in the RP.

Canon EOS RP vs EOS R – Which is the better buy?

Some lower-end cameras almost have the features of the higher-end originals, crammed into a smaller frame. The FujiFilm X-T30 only misses out on a few extras present in the X-T3.

That is not quite the case here. Canon has carefully pruned the EOS RP to ensure it is at least a little lesser in every area. However, the most important fundamentals remain.

The Canon EOS RP has a full-frame sensor, Canon’s highly regarded Dual Pixel AF and 4K video. And despite being years behind Sony in promoting full-frame mirrorless, the RP is actually fairly competitive.

To get 4K video at around this price, you have to track down the Alpha A7S from 2014. The Sony Alpha A7R II is much pricier, at £1799 online unless you buy a grey import.

The question then becomes: did Canon go too far? Keen videographers will probably say “yes”. Flat footage shooting and any form of high frame rate capture beyond 60fps are big losses for creative editing. However, the EOS RP fulfils almost exactly the same role as the often under-appreciated EOS 6D Mark II. It offers good enough performance at a lower price. And, unlike that camera, it has 4K shooting.

Judging by how some of the “normal” people we know use their cameras, the Canon RP seems like a very solid compromise. We’ll be able to say for sure in our full review very soon.