Candy Crush Cheats: Free your game and level up with these expert tips

Whether you’re casually playing a couple of rounds while waiting for the bus, or you’ve let yourself get much more obsessed, you’re sure to find some useful Candy Crush cheats in our guide to the popular game.

How much Candy Crush have you played? A few rounds here and there? Maybe you’ve played a little bit longer, and have reached level 100 or maybe even more?

Well Mark Nunan’s Candy Crush stats are certain to make a mockery of anything you’ve achieved. Although he initially started playing the game to prove his daughter wrong when she said he was ‘too old’ to play, Nunan recently hit level 3007 on the popular match three game, which celebrated its fifth birthday last year.

Mark’s almost certainly responsible for a disproportionate amount of the 50 billion rounds of Candy Crush that have been played since its launch.

So what’s the secret to his success? We’ve put together his top Candy Crush cheats so that you can one day hit the same fabled heights without having to spend all your money on extra lives and items. 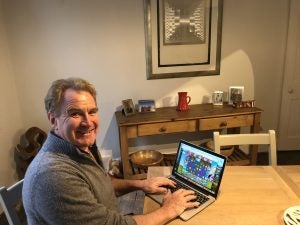 Candy Crush Cheats: Take it slow, but remember to keep it moving

Although it can be tempting to try and race through the game’s earlier levels, Nunan’s advice is to take it slow.

“The temptation is to play fast as there are so many options, but taking time to look for the opportunities of big explosions and combinations is worth it,” he notes, explaining that these are the best way to move the game forward.

That said, don’t obsess over trying to make big matches with every swipe. As Nunan explains, “3s are the bread and butter of the game and cannot be ignored. The only
times you do focus on 4s and 5s are when you have a timed game with a target score or when you have very limited moves.”

When you need to score big, it pays to plan ahead.

“The key is to plan your moves,” advises Nunan, who says that he often sees up to five moves ahead.

“Frequently the big chains do not present themselves so you have to make moves to allow them to be created. If I see two pairs of the same colour alongside each other I will always look to see if I can move another of the same colour into position.”

Getting these bigger matches is not just visually satisfying with the various explosions that they’ll trigger. The combination of plenty of candies being paired off will also net you fantastic score multipliers, which will help you progress quickly and smash those records. 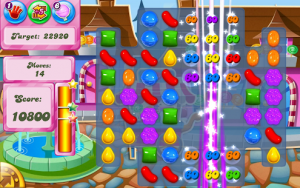 Although it’s often best to forge your own way, sometimes the game will give you a clear indication of how it wants you to play a level. Sometimes it’s as simple as needing to hit a high score in a smaller amount of moves (in which case, aim big), while other times you’ll need to target certain areas of the board, as Nunan explains:

“Where you have to clear cells or open gates that are in a certain part of the board you have to target certain parts…this is when it is really good to aim for 4s and 5s to get a bigger hit to move those more reinforced squares.”

However, with that said the game will occasionally mislead you, especially in its later levels where there are some “dead ends” and “false leads” that you’ll need to ignore, according to Nunan.

Like many mobile games, Candy Crush is a game that’s designed to be played in short chunks, and this was a point Mark Nunan was keen to emphasise, where personally he plays during downtime in the day such as while on the train or waiting at a coffeeshop.

This should also keep you from making rash decisions. During the game’s later levels patience becomes a much more important factor, and playing for lengthy sessions could encourage you to make rash decisions and cut corners.

Resist the urge and just take a break. 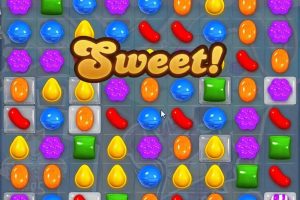 In Candy Crush, successfully completing strings of levels in a row will unlock ‘boosters’, which can grant you special abilities and make some of the harder levels a lot more manageable.

The only problem is that it can be quite hard to complete that many levels in a row, especially when you’ve reached the game’s later stages.

The solution might sound like a bit of a cheat, but Nunan’s recommendation is hard to fault.

“I do sometimes go right back to levels one to ten in order to get six wins in a row and earn the gold spaceship or Morty’s most powerful hat.”

But that’s about as far as Nunan is prepared to go in order to manipulate the game, and says that he’s never manipulated his phone’s clock to automatically unlock more lives (although the less principled amongst you might be more tempted).

Finally, although Candy Crush is a free game that makes its money through microtransactions it might surprise you to hear that Mark has never spent any money on the game at all.

“In my case. There has been no need to spend anything…not paying has become a thing.”

It’s certainly reassuring to hear that coming from a player who’s happily gotten three thousand levels into the mobile game.