Boxing returns to Sheffield’s FlyDSA Arena tonight, with Kell Brook taking on Mark DeLuca in the headline fight. The Sheffield fighter didn’t fight once last year and, consequently, is looking to rebuild and take on the final few fights of his career in style. Here’s how to watch Brook vs DeLuca tonight.

Brook is a heavy favourite to beat DeLuca but the Yorkshireman definitely showed signs of vulnerability last time out and, having not fought once in 2019, he’s likely to have some ring rust to shake off. He believes he can become a world champion in the sport again but will have to show he still has what it takes come Saturday night.

Even though there are no major honours on the line, the stakes are high. Brook has said he will retire in the ring, following the fight, if he loses to DeLuca.

Brook vs DeLuca Live Stream: How to watch the fight wherever you are

In the UK, viewers can tune in using the Sky Go app. Simply login using your Sky ID.

In the US, viewers can stream the fight on DAZN.

For everywhere else, if you’re unsure if you can use these streaming options in your region, a VPN could be the best workaround. That’s because access to normal coverage might be geo-blocked – that is, you may be prevented from watching outside your home country, usually due to rights reasons.

VPNs encrypt and anonymise your data and enable you to appear as if you are watching from your home country, so they are useful for much more than entertainment.

We’ve tested 18 of the most reliable VPNs – see our guide to the best VPNs to help you out. Or you can find out more about the top 4 in our comparison table below. We’ve found three good VPN deals which should get you started, which we’ve featured below. In our testing these have usually provided good value VPN access for a wide range of services. Or scroll down for our pick of the top 4 in our VPN tests.

There are a whole host of great fights on offer this Saturday night. An undoubted highlight is Dave Allen’s return to the ring, as is that of local favourite, Terri Harper, who is putting her IBO world title on the line.

Fans can’t overlook Kid Galahad’s return to the ring either, the Sheffield fighter was unlucky last time out. The judges scored against him in his IBO featherweight world title clash with Josh Warrington. Had the judges seen it as many fans and pundits did, Galahad could be a world champion himself. He takes on Claudio Marrero.

Fans are eagerly awaiting the ring return of the heavyweight known as ‘The Doncaster De La Hoya’. Dave Allen suffered a career setback loss last time out, against Liverpool giant, David Price. Now, he’s taking on a lesser opponent in Dorian Darch and looking to rebuild his reputation. Despite the less than blockbuster match-making for Allen’s comeback, he’s a huge fan favourite and well worth watching.

Conversely it’s been all up for Terri Harper. The Yorkshire native will enter the ring in Sheffield, on Saturday night, to take on her tenth professional opponent. She’s stopped five of her previous opponents within the distance and is looking to add Eva Wahlstrom’s WBC super featherweight world title to her own IBO title. It’s an exciting match up.

Harper’s Finnish opponent, Wahlstrom, has experience on her side. She’s got 23 wins, one loss and two draws to her name but, at 39, some will question whether she has passed her peak. Her only loss came against superstar Irish fighter, Katie Taylor. 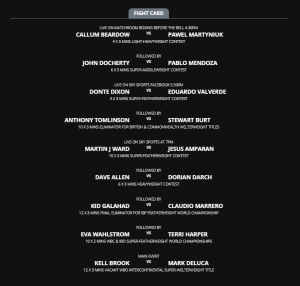 Kell Brook is a huge favourite going into Saturday’s bout. However, at this late stage in his career, an upset is far from impossible.

‘Special K’ has lost only two of his 40 contests but the 33-year-old Sheffield man looked far from bullet-proof in his last outing against  Michael Zerafa, back in 2018.

However, at that point Brook had abandoned long-time trainer Dominic Ingle to work with another of Sheffield’s boxing brains, the lesser-known trainer, John Fewkes. Brook has since re-united with Ingle and that can only be seen as a boost to his chances come Saturday.

Ingle’s track record is as impressive as Brook’s. Having followed in his father’s footsteps to operate the Wincobank Gym in Sheffield, he’s trained numerous world champions and remains a well respected face in the sport.

In the opposite corner, 31-year-old Massachusetts fighter, Mark DeLuca, is looking to cause a huge upset. However, ‘The Bazooka’ hasn’t taken on anyone at this level before and lost to a relatively unknown 36-year-old, Walter Wright, back in 2018.

In short, there’s nothing to suggest DeLuca will cause an upset, but there are very few certainties in boxing. Kell Brook fans will hope for a showcase that suggests Brook can go on and become a two-time world champion. However, the Englishman will need to make sizeable improvements on his previous appearance.