Computex wouldn’t be Computex without a selection of ridiculous and ambitious PC case mods, and this year, we’ve seen a real cornucopia of over-complication.

In past years, we’ve seen robotic tank PCs, pirate ship PCs, a PC shaped like Master Chief, and even a PC modelled on the Taipei 101 tower.

In terms of sheer bravura and silliness though, Computex 2019 might have just raised the bar. While many of the best mods converged around the stand of power supply makers FSP Technology, we saw a few others lurking on other company stands. Then there’s the likes of AZZA’s E-Sports Table custom case – which we’ve excluded from this round-up, because, as outre as it is, it’s still a product that you’ll be able to buy one day (if you wanted). The best Computex case mods are, of course, the one-offs, the custom-builds, true works of Art. That’s Art with a capital A.

Right, that’s enough dissembling. Let’s have a look at these assemblages. 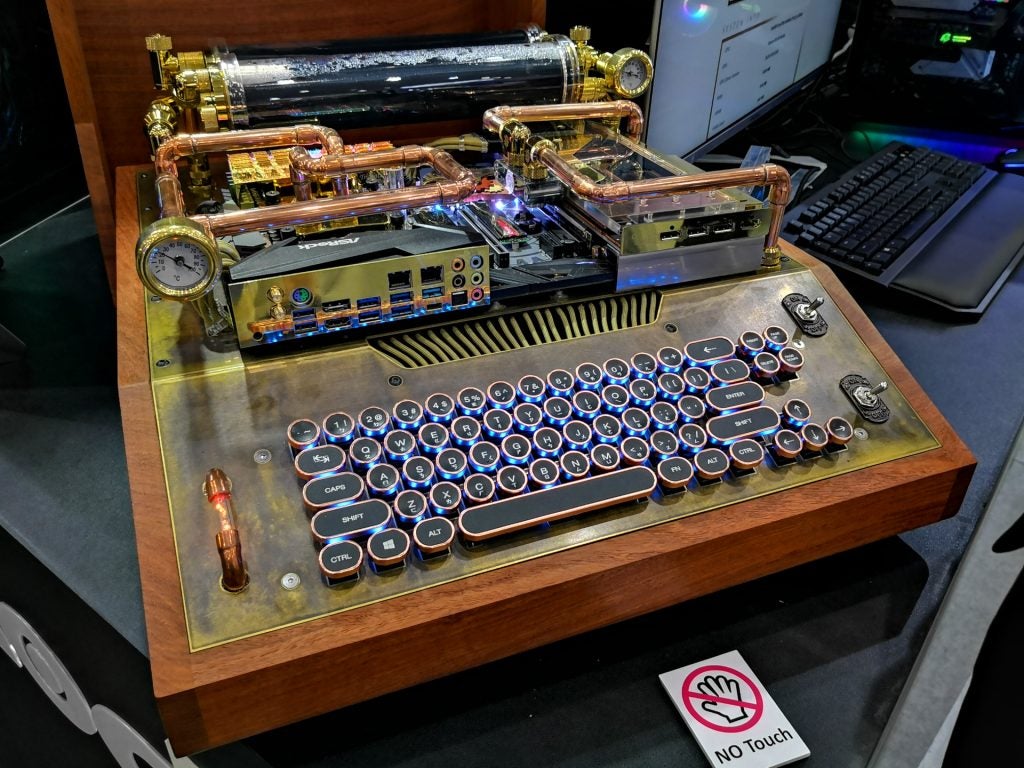 Based on: ASRock Z390 Taichi

What is it? It’s every steampunk gamer’s dream, of course, a PC that looks like the spawn of a Remington No. 2 and a flugelhorn. This dizzying Heath Robinson-esque synthesis features beautiful brass fittings and copper piping directing inky black coolant to the processor (unknown) and the GPU (a AMD Radeon VII) and even a little pressure gauge, which complements the existing cogs ‘n gears aesthetic of the ASRock motherboard perfectly. Glowing memory sticks, blue under key lights and a wooden outer carry case complete the look. 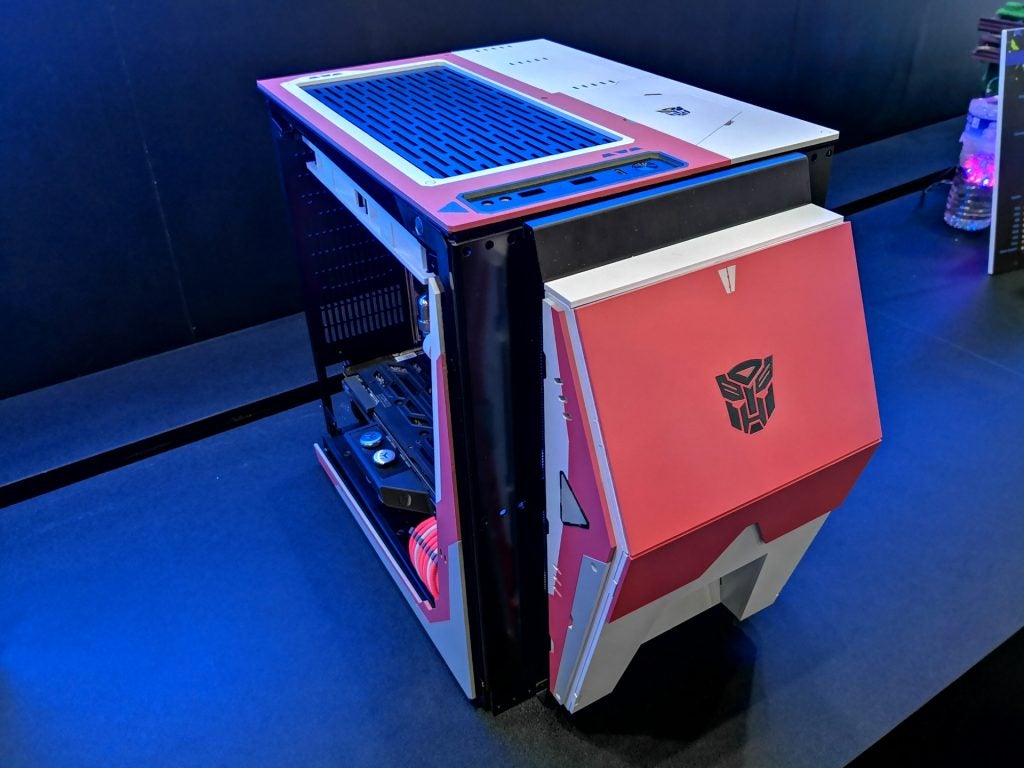 What is it? It’s a PC based on Arcee from Transformers (duh), complete with the same bubblegum pink, gunmetal grey and white livery of the character. This picture-perfect pink case houses an EVGA H370 Stinger, which holds an Intel Core i5-9600K, an EVGA RTX 2080 TI XC Black, 16GB of Xcalibur RGB DDR4 RAM, and an MS30 M.2 SATA SSD. Lacerna says that he fashioned the coloured plates from acrylic and made sure the custom cable sleeves matched the overall colour scheme.

From the artist: “I’ve been modding for seven years now and I am very happy to share this passion with everyone. I had lots of fun working on this build as the colours are not my usual combination. I hope you enjoyed this build as much as I did. Thanks and Mod On!” 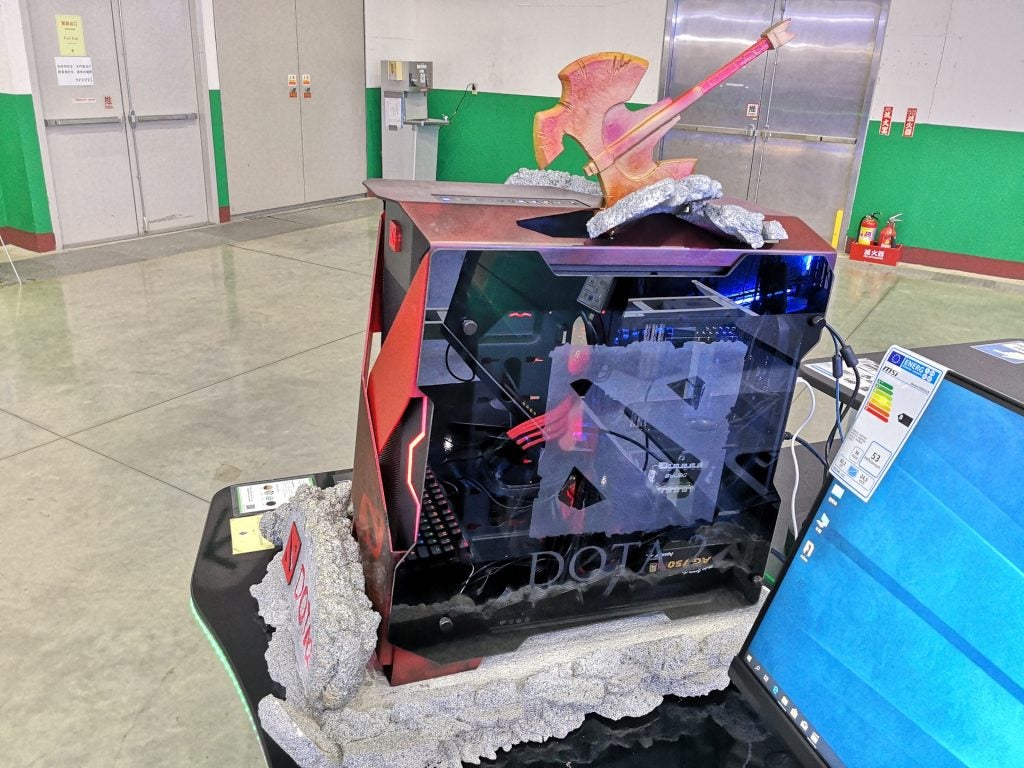 Based on: Apex Gaming X-Mars

What is it? It’s a glowing gaming PC emerging from a pile of rubble with a massive great axe sticking out of the top. That’s it. What more do you want? Oh, apparently it’s got something to do with Defence of the Ancients 2.

From the artist: ZAT MOD wasn’t anywhere to be found at the Apex Gaming stand where this mighty work was found resting. You can check out more of ZAT MOD’s work on their Facebook page. 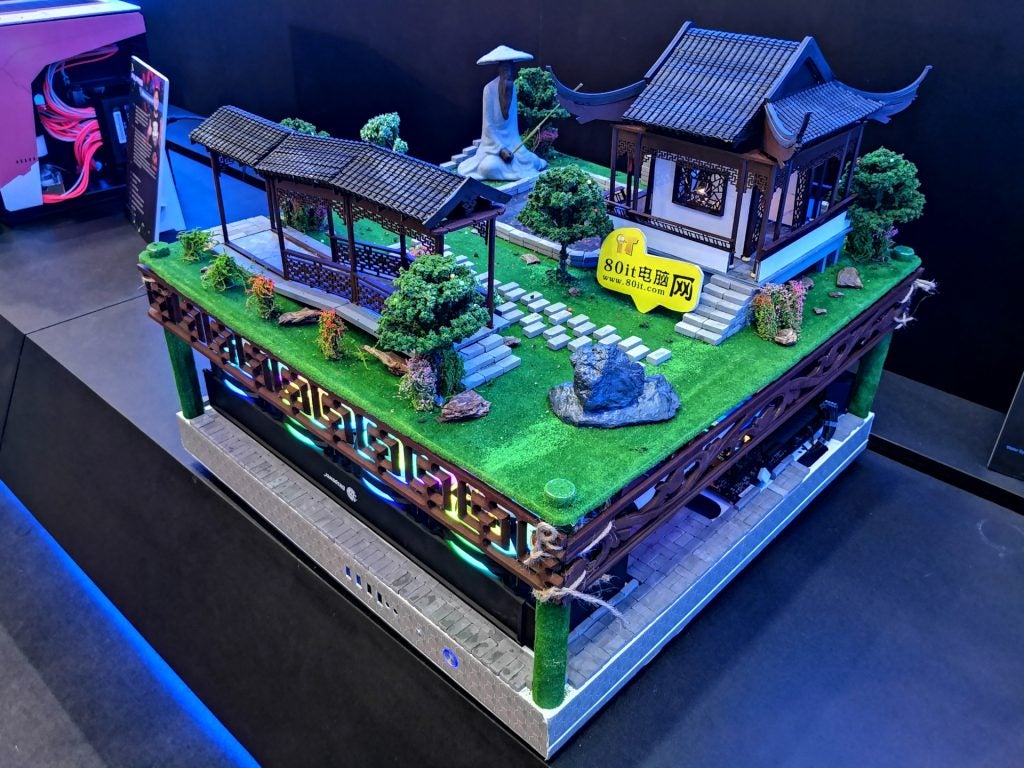 What is it? A recreation of a traditional Chinese garden, with all of the PC components relegated to the underworld – peer beneath the verdant surface, and you’ll (just about) spot a Bitspower water cooler keeping an Intel Core i9-9900K and an Asus ROG Strix RTX 2080 O8G Gaming under control. Squint at the stonework in the foreground and you’ll see that four Type-A USB ports have been snuck in there. Other components include G. Skill Trident Z Royal DDR4 3200 16GB of RAM and an Asus ROG Strix Z390-F Gaming tying that all together, with an FSP Dagger Pro 650W PSU supplying the juice.

From the artist: “The court style has always been the main style of the Chinese 5000-year-old. The product aims to promote the Chinese traditional culture, Chinese spirit, and low-carbon environmental protection.”

The Best Pork Ramen Complex (Attack on the Pig World) 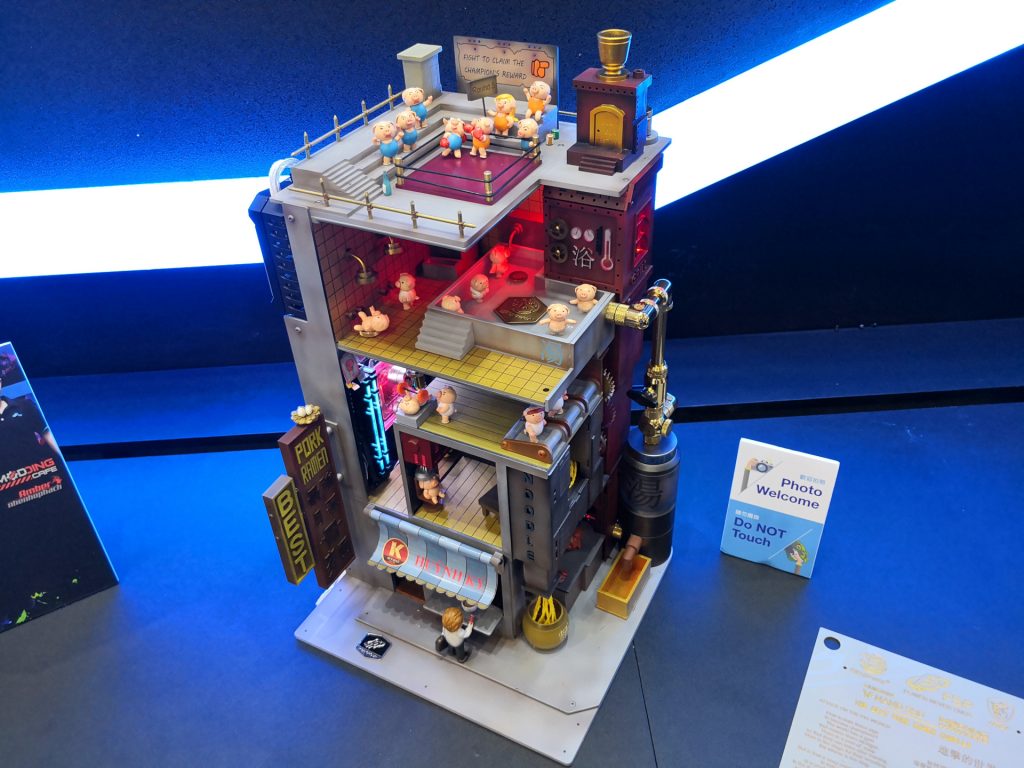 If you ask me, this is the one. It most certainly takes the bacon, and delivers what you might call a pork chop to the competition…

What is The Best Pork Ramen Complex, exactly? It’s a PC multi-storey bathhouse-cum-gymnasium for a gang of adorable anthropomorphic pigs.

Hidden within its many layers are a number of tasty components – an Intel Core i9-9700K, an MSI RTX 2060 Ventus 6G OC, Samsung Pro 512GB SSD, an FSP Dagger Pro 650W PSU, HyperX Predator RGB RAM and a Bitspower water cooling. You’d be hard pressed to spot all of them though, such is the level of detail and care that’s gone into this mod.

Amazingly, The Best Pork Ramen Complex is not just a stupendous piece of modelling, it’s also a tribute to fellow artist Bangzheng Du’s painting of the same name. 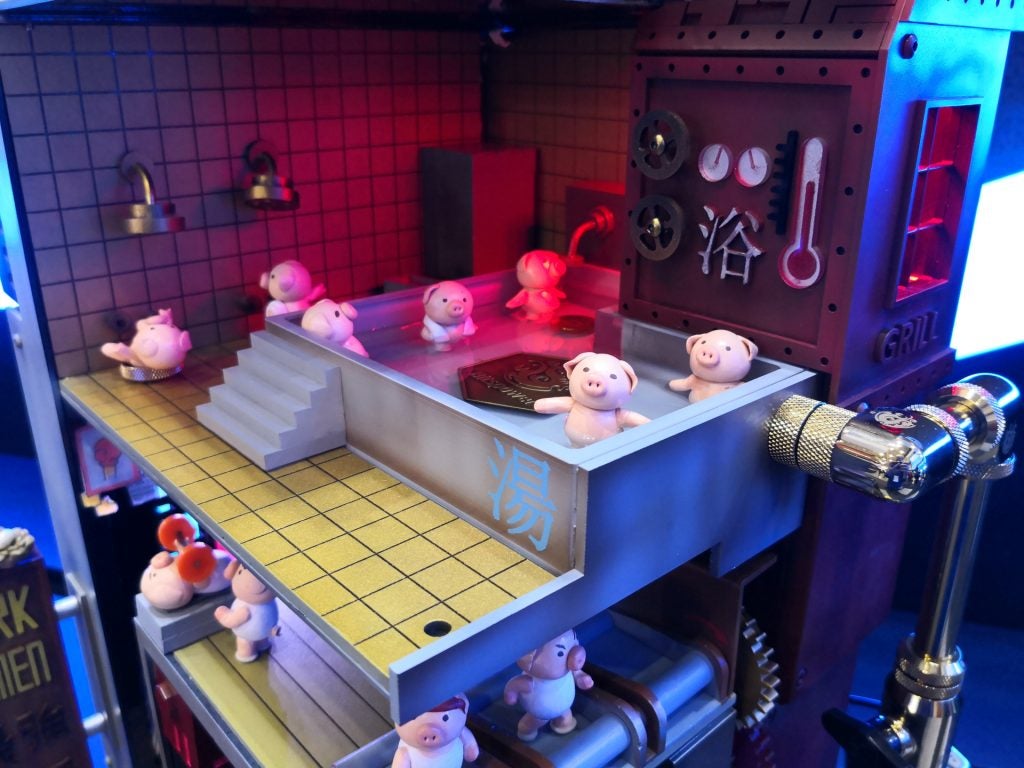 Trusted Reviews happened to catch up with Amber Spider at Computex 2019, and he told us a bit about the process, and how he got Bangzheng’s blessing:

“The first time I saw the artwork, I felt it was very interesting, and I asked the artist if they wouldn’t mind if I made a 3D model, and they said yes! It took me two months to build from A to Z. I’ve made it become a real thing!”

The attention to detail that’s gone into this is really impressive. In the image above, you ca,  see how Amber Spider has even replicated the boxing glove poster from the original.

The devil, as they say, is in the detail, and after spending a brief amount of time in the Best Pork Ramen Complex, you realise that there is a dark twist in the tale.

If you’re even slightly squeamish, you might not want to scroll all the way to the bottom of this page to reveal the horror of the last picture. Sylvanian Families suddenly goes a little bit Delicatessen. Don’t say we didn’t warn you.

From the artist: “Attack on the Pig World – How to train these pigs to become champions? The world has a gym that makes them stronger. There is a pool of soup so that they can relax after training. Here is the stage for their wrestling, the winner is the king. But is that a soup pond or a soup pot? Is that a treadmill or a production line for ramen? Is the throne a champion that everyone admires, or is it actually just a meal? This black humour is cool, but I must apologise if it makes you think too cruel.” 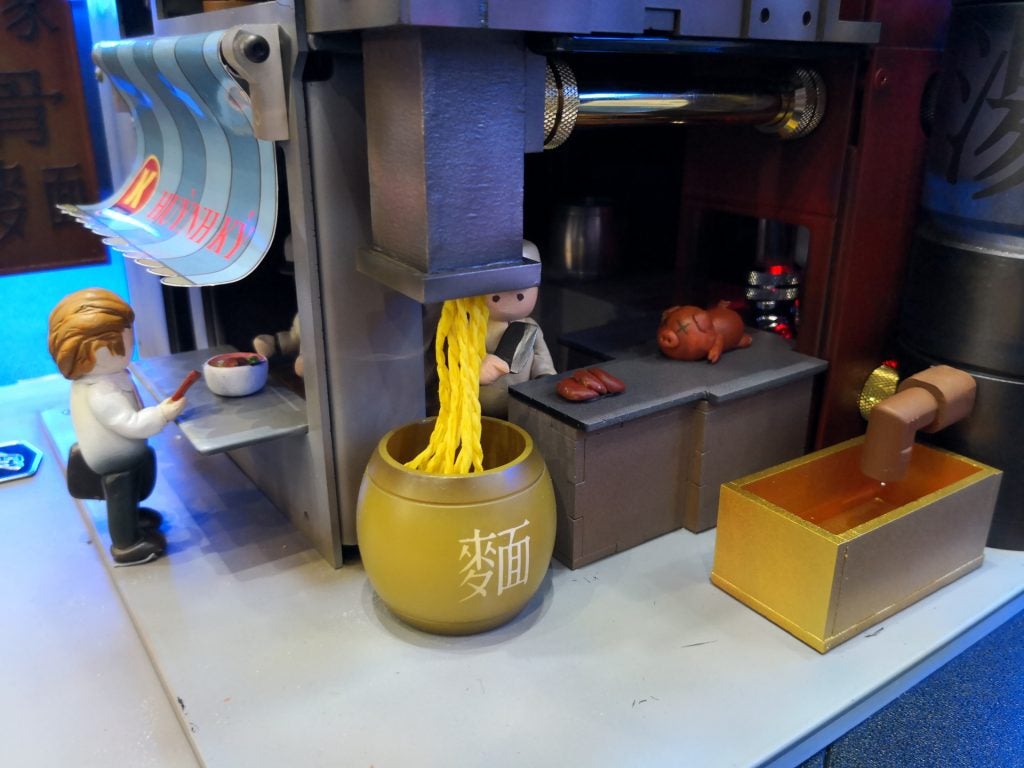 Happy now? We did warn you.