The MWC 2019 show might have only just kicked off, but we’ve already seen an absolute load of fantastic tech over the past few days.

2019 is going to be an exciting year for gadgets, with folding phones now a reality and 5G finally on the horizon. We’ve been trawling the halls of Barcelona’s Mobile World Congress for all the best phones, laptops and here are the best products we’ve seen. 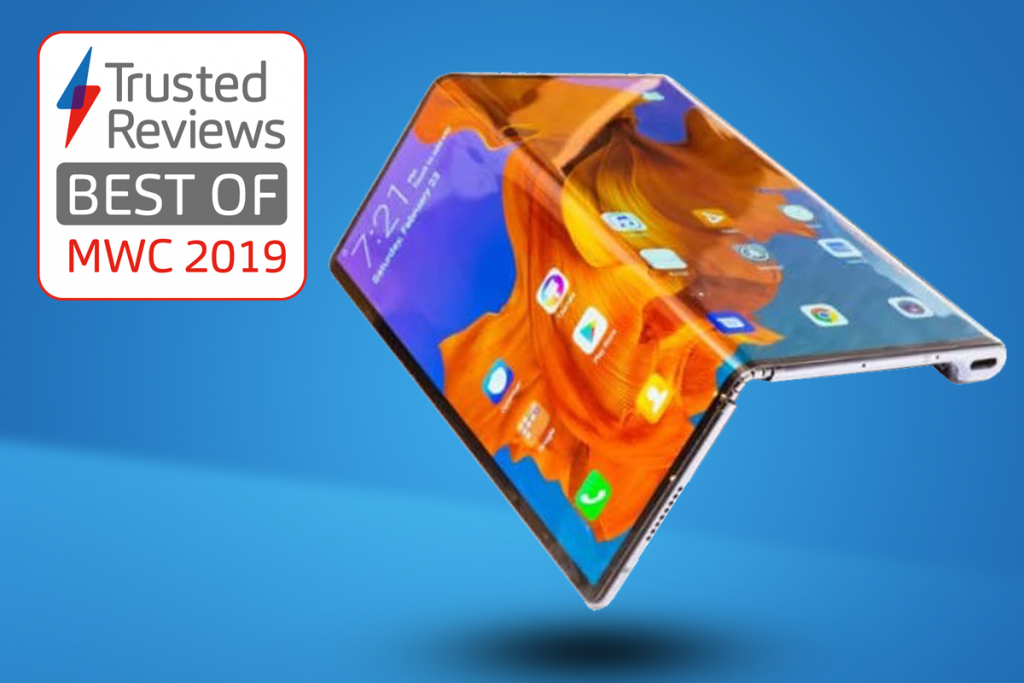 Stunning the crowd of press at its initial unveiling, the Huawei Mate X has already set the blueprint for foldable devices going forward. This is a gorgeous device with a foldable design that’s so much more practical than the Galaxy Fold.

Instead of the Fold’s two screens, the Mate X has one panel that folds down from an 8-inch tablet to a 6.6-inch phone. Importantly, there’s no notches and it folds completely flat. Impressive stuff.

It’s 5G device too, with a new Leica camera system (that we know literally nothing) about at the back. But really it’s not about the specs, this is a glimpse at how phones will look in the future. Shame about that price, though. 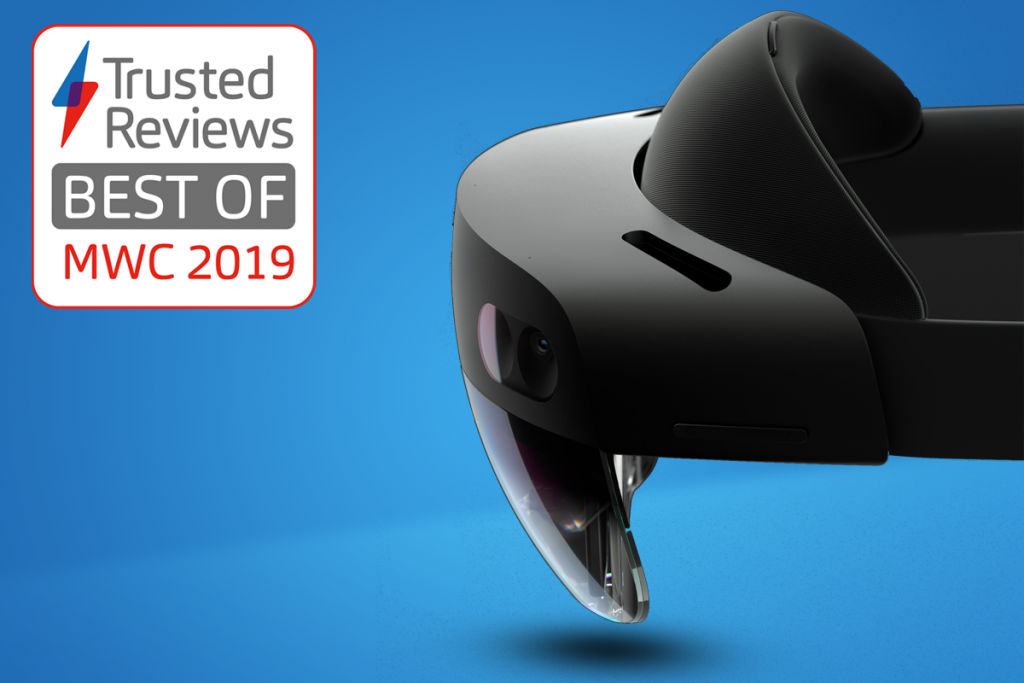 As the HoloLens 2 is not a consumer technology product – it’s a commercial device, as Microsoft made abundantly clear during the launch and our demo – it feels a little odd for Trusted Reviews, a consumer technology review site to be handing out an award for this, but, it was one of the standout devices of the show.

From a purely technical standpoint, it’s a marvel. The upgraded display, is “industry-defining” according to Microsoft’s technical fellow for AI and mixed reality Alex Kipman, and the iterative leap from version 1 of the HoloLens is on part with moving from “a 720p TV to a 2K TV”.

Compounding the sense of immersion a wider field-of-view creates is the fact that the HoloLens 2 has a better sense of of where your hands are in relation to holograms, so interacting with menus, windows, and objects will feel much more intuitive and easy to navigate. It’s very easy to use and actually, whisper it, could make people’s jobs enjoyable.

HoloLens 2 is expensive, yes, and for now, limited to workplace applications. It’s not going to give Oculus or HTC anything to worry about. Yet. Microsoft clearly has big plans for mixed reality, and has hinted that we may see HoloLens come to gaming one day. 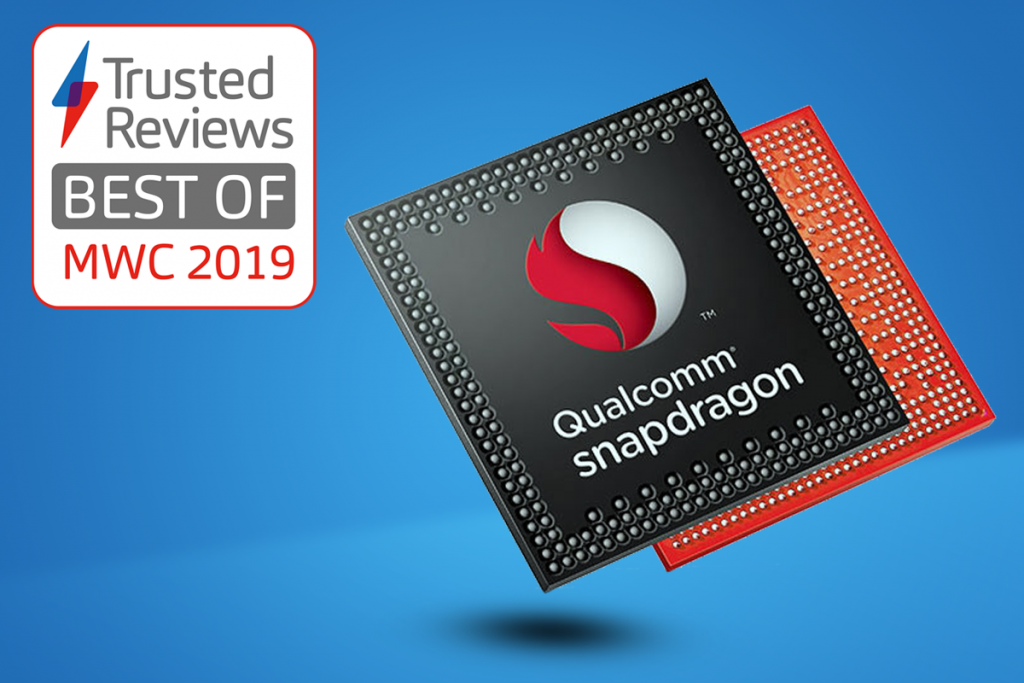 You couldn’t look anywhere at Mobile World Congress 2019 and not see a phone with an X50 modem inside.

For the most part, we saw devices powered by the Snapdragon X50 doing some pretty amazing things, like stream triple A games in 1080p at 60fps, deliver download speeds in excess of 2Gbps and, according to Qualcomm’s president Cristiano Amon, it won’t cane the batteries of devices.

On top of that, we also saw a technical demo of the Snapdragon X55 modem at Qualcomm’s stand, consistently delivering download speeds of 2.7-2.9Gbps over the Ericsson network, and that was with four other devices loaded on the same cell at Qualcomm’s stand all streaming games and video content.

Auctions for parts of the so-called millimetre wave have not yet taken place in the UK, so this demo might not be that representative of what we can expect when we get the first X55 phones later in the year. The nondescript reference design model was just a black box with no display, camera, or any other smartphone components – so nothing else taxing the entire system, which will have an effect on how much power is available for the modem, and therefore, how much bandwidth you can get at any one time.

But with the X55 destined to arrive later this year, and phones with X50 modems already doing some pretty incredible things, we’re hyped enough for the X55, and everything else that Qualcomm indirectly brought to the table at MWC 2019 – the Xiaomi Mi 9, the Microsoft HoloLens 2, the mystery OnePlus device – is enough for us to give the X50 and X55 a joint award. 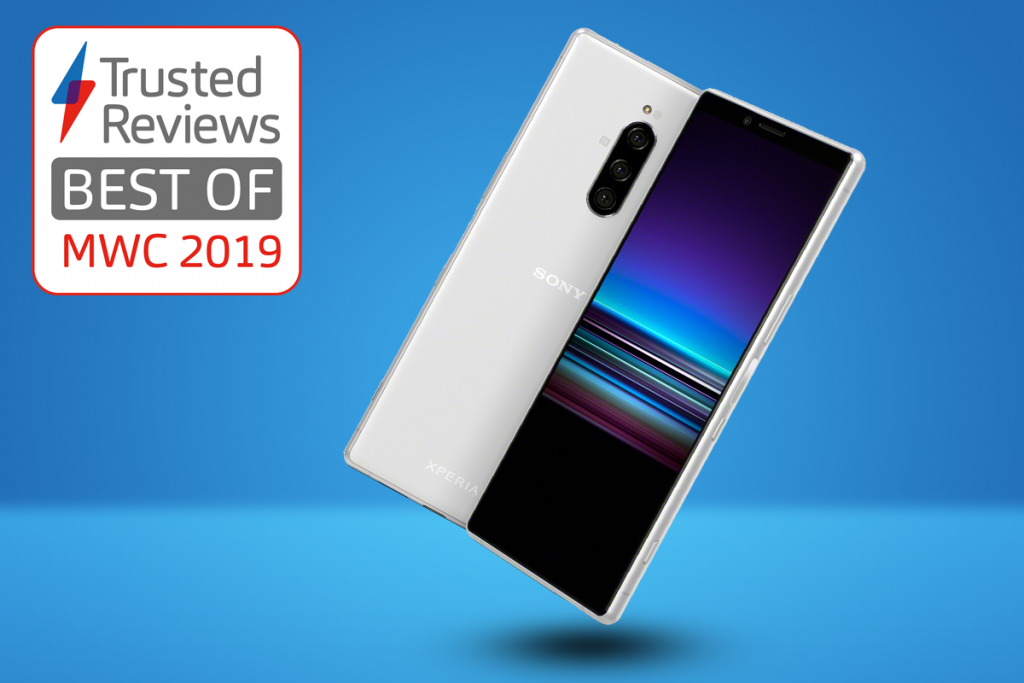 Sony’s reimagined its smartphone portfolio, with the Xperia 1 now serving as the brand’s flagship handset. It boasts a ton of firsts, including the world’s first 4K HDR OLED display on a smartphone, not to mention it’s also the first phone to pack in a camera with Eye AF – eye-tracking auto focus − and exposure control at up to 10fps.

The camera system is another big talking point, with the Xperia 1 being the first of Sony’s smartphones to boast a triple lens array. There are three 12-megapixel sensors split between a main, wide-angle and telephoto setup, complete with optical image stabilisation.

The phone even integrates technology from the company’s Alpha still cameras and its CineAlta cinema cameras, to offer 4K HDR video recording in unprecedented quality for a smartphone.

Powered by a Snapdragon 855 chipset and boasting an extended 21:9 aspect ratio screen, the Xperia 1 is flagship through and through, with multimedia talents unlike any other phone on the market. 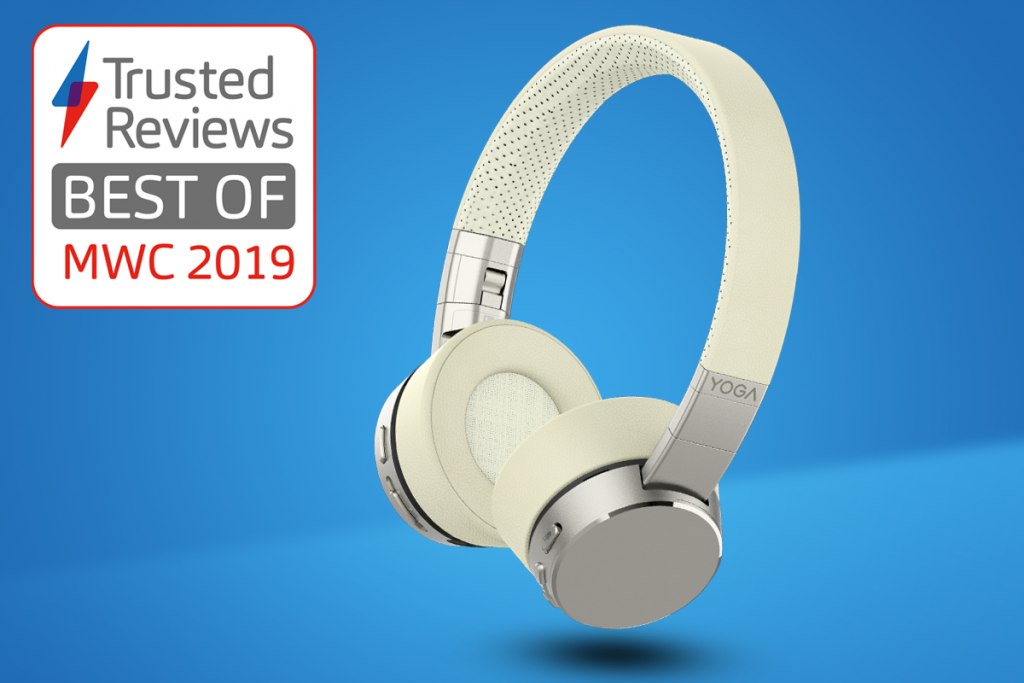 MWC isn’t a show you associate with headphones, especially when the Bristol Hi-Fi show is happening just across the pond from Barcelona. But that hasn’t stopped PC-heavyweight Lenovo unveiling its first ever headphones, the Yoga ANC.

Despite being a first generation product from Lenovo the Yoga ANC headphones have the on-paper specs to give established players like Bose a run for its money. For a modest €158 (£136) you get two level ANC (active noise cancellation) that lets you block up to 30db of background noise, a robust 15 hour quoted battery live, Bluetooth 5.0 connectivity and 40mm Dolby tuned drivers.

For the money you’ll struggle to get a better specced set of on-ear set wireless headphones. If that wasn’t enough to tempt you they also look awesome, featuring a nice soft cream colouring and premium feeling aluminium cups. 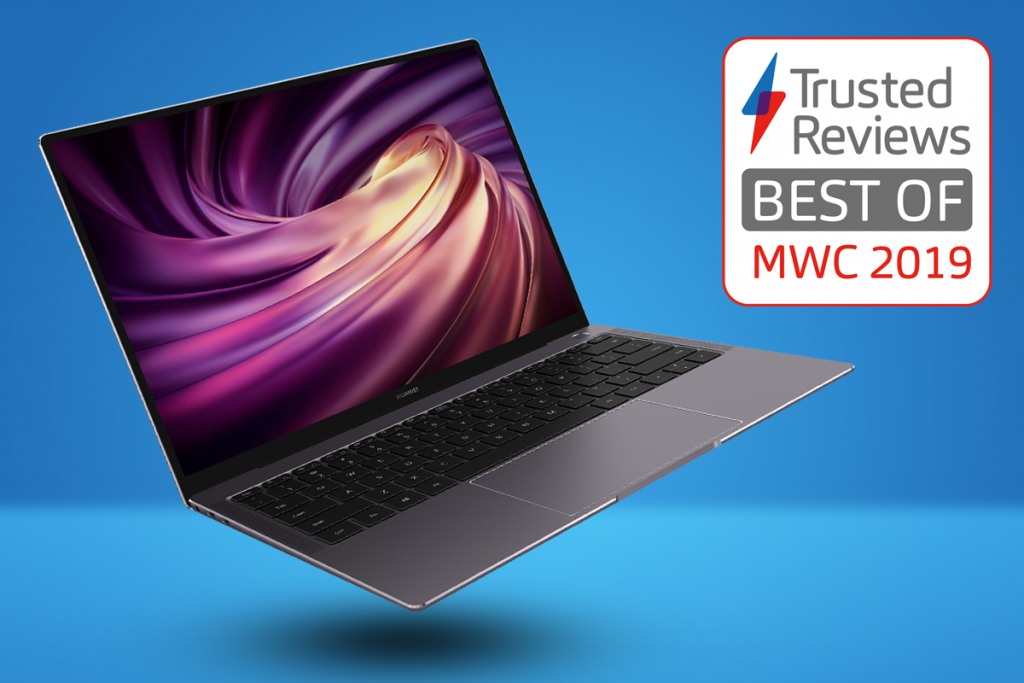 Considering it has only been making laptops for a couple of years, it’s impressive just how good Huawei’s MateBook series has become. The MateBook X Pro (2019) doesn’t have much computing competition at MWC 2019 – this is very much a show for phones and mobile tech – but it still stands out thanks to a slick design and some tight integration with Huawei’s very good phones.

New additions for this second-gen model include better graphics, faster performance and improved connectivity with Thunderbolt 3. 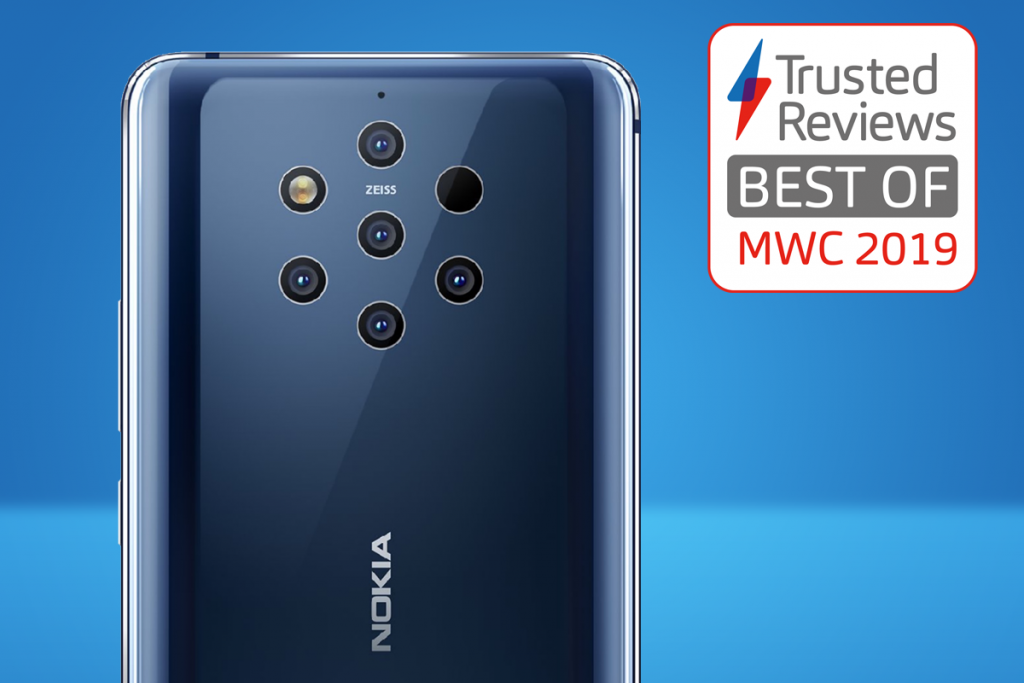 HMD Global threw out the rulebook when developing its new flagship, the Nokia 9 PureView. The phone packs in a total of five cameras on the back, along with a special ToF (time-of-flight) image sensor.

The company partnered with computational photography specialists Light to give this latest PureView some unique imaging talents. The phone can gauge depth between 7cm and 40m, split into some 1200 layers of depth data (when most phones use a maximum of 10), granting images impressively rich bokeh and additional abilities when it comes to editing the RAW files that the phone is capable of producing.

The five camera array also promises unprecedented dynamic range, pulling in image data from its fives sensors (two RGB and three black and white), condensing it into a single 12-megapixel file. Sample shots, not to mention our initial testing, have shown plenty of promise so we’re itching to get this phone in for a full review. 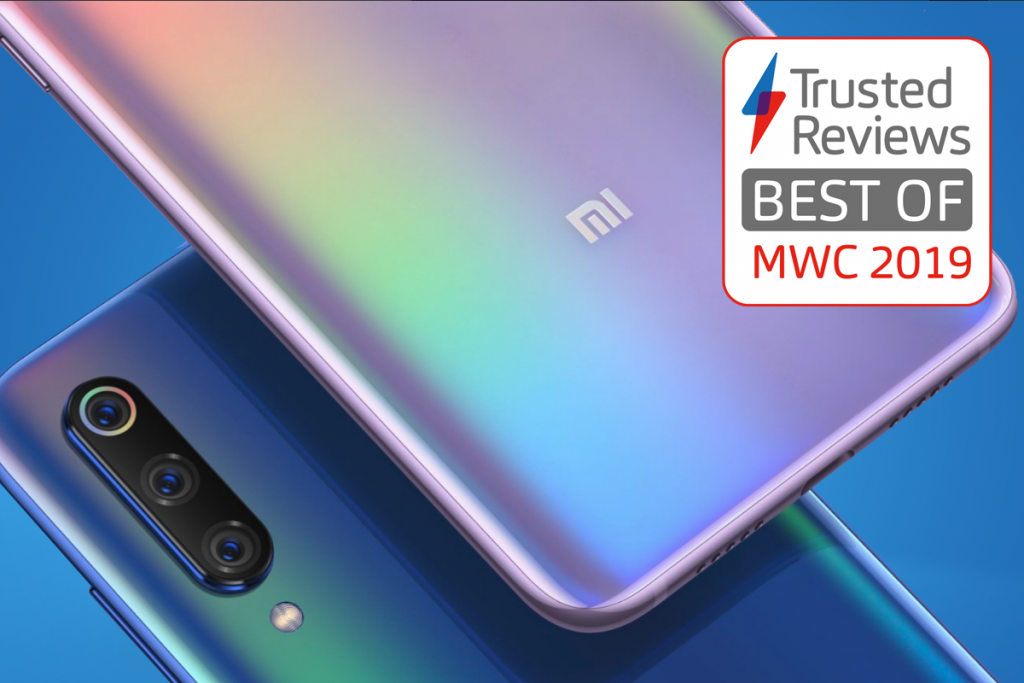 The Xiaomi Mi 9 is like following up your debut album with an absolute banger. Its predecessor, the Mi 8, only arrived in the UK in November 2018, but the Chinese brand’s new all-rounder trumps it across the board.

It’s powered by the latest Snapdragon 855 mobile chip, has a powerful triple camera setup (led by a 48-megapixel sensor), and is fronted by a 6.39-inch AMOLED screen. Oh, and it only costs from €459, making it a strong rival for the likes of OnePlus.

We’re looking forward to giving it a full audition when it arrives in the UK in late March 2019.

What are your favourite products at MWC 2019? Let us know on Twitter @TrustedReviews.