The BBC’s international news site is now available via the encrypted Tor network. The change means it will be accessible to users in nations where it would otherwise be blocked because of censorship rules.

So can we expect to see the BBC’s North Korean readership sky rocket? (No rocket pun intended. Don’t press the button please Kim.) Well, it would be hard to tell even if it did. Tor – standing for The Onion Router, because of its ‘layers’ of encryption – uses volunteer PCs to encrypt your connection to a given site on their network. 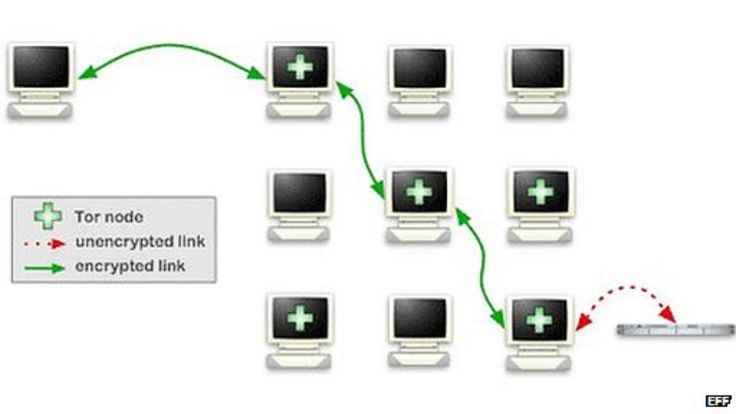 Image credit: EFF via the BBC

Tor serves a dual purpose. Firstly, it maintains anonymity of users, so you can avoid your browsing data being tracked. As a result there are reports of criminals using Tor.

Secondly, it allows users to visit ‘hidden’ sites. These hidden sites use the .onion suffix in their URL.

Hence the BBC’s new site, accessible only via Tor, not via normal browsers, and is found at the following URL: https://www.bbcnewsv2vjtpsuy.onion/

The Tor browser was originally pioneered by the US Navy, due to the importance of encrypted communication for military uses. As the above diagram illustrates, the connection goes via a series of volunteer computers. The last computer link the encryption chain is the only identifiable one and, obviously, it’s not the one you’re using if you connect to something via Tor.

So, what does this mean?

Seemingly, the BBC are hoping that people will be able to access more balanced news content in nations that employ censorship. Iran, Vietnam and China have all tried to block BBC content and now, users in those nations with Tor software, will be able to access the new version of the site, at least in theory.

If you’re not of the view that this is a bit superior of the BBC, then it seems like quite a public spirited move, on a international scale. Of course, it will only affect those with the tech savvy to get Tor, so it doesn’t represent a large scale challenge to censorship. It is an interesting move though and the timing is interesting too, given China’s involvement in the longstanding Hong Kong demonstrations.