DICE has outlined the minimum requirements need to run Battlefield 4 on the PC, ahead of the game’s November 1 release date in the UK.

Releasing an image capturing all of the minimum and recommended requirements for the upcoming FPS, DICE posted the specs on the official Battlefield Twitter account.

Anyone who fancies running the stunning Battlefield 4 on their PC will have to make sure their rig is suitable for the next-gen graphics provided by the Frostbite 3 engine.

DICE suggests that the 64-bit Windows 8 is the optimum OS for Battlefield 4 combined with either an AMD six-core CPU or Intel quad-core CPU.

However, to run the game at all you’ll have to meet the minimum requirements DICE outlines as the 32-bit Windows Vista SP2 with KB971512 platform update for the OS.

To achieve anywhere near the photorealistic graphics shown off in the Battlefield 4 demo, your PC will have to be equipped with an AMD Radeon HD 3870 or Nvidia GeForce 8800 GT card with 512MB of graphics memory and a 30GB hard drive.

Earlier this week, DICE released the Battlefield 4 weapon customisation video (included below) that showcased how you’ll be able to adapt weapons in game. DICE has also made it easier for you to identify the affect any moderations will have on a weapon too.

“Browsing through the accessories, you’ll notice a handy visual guide on the right part of your screen,” explained DICE. “Here, weapon stats such as damage, accuracy, hip fire accuracy, range, and stability are displayed in easy to read bars – so you can immediately gauge what effect equipping a certain accessory has. Slap on the Laser Sight for instance and you’ll see the hip fire (accuracy) bar go up. Attach an Angled Grip on a rifle and you’ll notice an increase in the weapon’s stability.”

Battlefield 4 will be available on November 1 in the UK for Xbox 360, PS3 and PC. The Xbox One and PS4 version are launch titles for both next-generation consoles later in November. 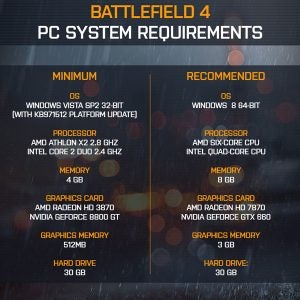