What is Batman: Arkham Knight?

Batman: Arkham Knight is the upcoming closing chapter to the Arkham series, currently in development by Rocksteady Studios and we’ve had the chance to go hands-on with the game at E3. We were honestly seriously impressed by the first next-gen Arkham title and cannot wait for it to launch next year.

The game is the first title in the series to be developed only for new-generation consoles, the PS4 and Xbox One, as well as PC. It is also the first to introduce a driveable in-game Batmobile thanks to its next-gen credentials. You’ll not only be able to drive it, but you’ll also need to utilise its features, including a grapple hook, to solve puzzles.

Sadly, the game has now been pushed back to a 2015 release, hopefully to allow for more development time to make this the best Batman game ever.

“The Arkham games have always been about providing that power fantasy, about being and feeling like Batman. We’re going to take it further with the addition of the Batmobile and the bigger city”, said Rocksteady’s Sefton Hill.

Any and all Arkham Knight news we hear will be added to this article, so make sure you keep it bookmarked for the latest. 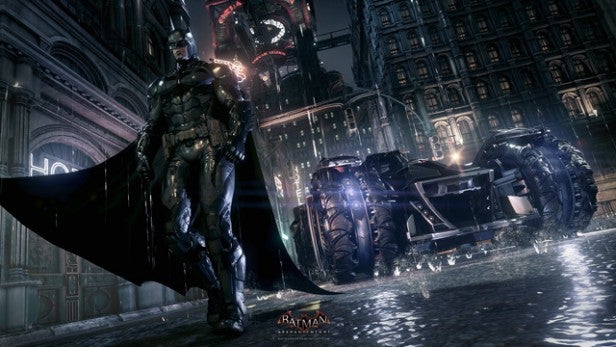 We were lucky enough to get some extended hands-on time with Batman: Arkham Knight at E3 this year and were hugely impressed by the scale and graphical prowess of the upcoming Arkham title. You can read our first look Batman: Arkham Knight review for the full details, but we expect this to be one of the best games to land on your consoles in 2015.

“Batman: Arkham Knight looks to be the
ultimate Arkham game. You get superior graphics, truly seamless gameplay
and new tricks, puzzles and the Batmobile. It’s one of the best-looking
and most impressive games we’ve seen at E3 and should be one of the defining fourth-generation console games.”

Batman: Arkham Knight Release Date: When is it coming out?

Originally due to arrive in the latter half of 2014, developer Rocksteady has pushed back the Batman: Arkham Knight release date to 2015.

The news was announced in a Batmobile trailer, which you can view below, but neither Rocksteady nor Warner Bros have explained any of the reasons behind the delay.

“Batman: Arkham Knight is the pinnacle of our hugely successful franchise and we are giving players the most expansive, impressive title in the series,” said Martin Tremblay, President of Warner Bros Interactive Entertainment at launch. “We’re excited to be developing the game for next-gen platforms, which has allowed us to bring to life the design elements that we envisioned from the beginning such as the Batmobile and how it augments Batman’s abilities, to the fully detailed and realised Gotham City.”

Pre-order perks
If you pre-order Batman Arkham Knight now, you’ll get access to the playable Harley Quinn add-on. In this exclusive DLC pack, you can use her unique weapon set and abilities to explore Gotham for the first time in an Arkham game.

You’ll also get access to four exclusive challenge maps, although additional details for these are not yet available. 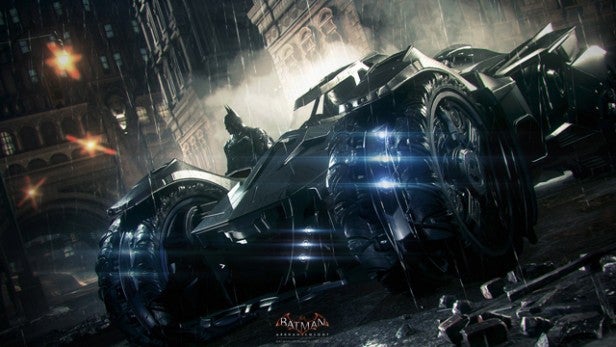 Batman: Arkham Knight News: What do we know so far?

Wouldn’t be possible on last-gen consoles
Batman: Arkham Knight and its brand new driveable Batmobile are only possible because of the processing power of the Xbox One and PS4, according to developer Rocksteady.

Apparently the Batmobile alone takes up 160MB of memory, which is just too huge for the PS3 or Xbox 360 to cope with.

“It will fit just about in an Xbox 360 if [that was the whole] game. It’s very next-gen,” explained Art Director David Hego.

The PS4 and Xbox One have also allowed the developer to create a much denser Gotham City for Arkham Knight.

“This is a single player game. There is no multiplayer. We don’t have time to do multiplayer,” said game director Sefton Hill. “We want to focus on making the best single-player experience we can. We don’t feel that it needs a multiplayer element. Warner Bros backed that up right at the start.” 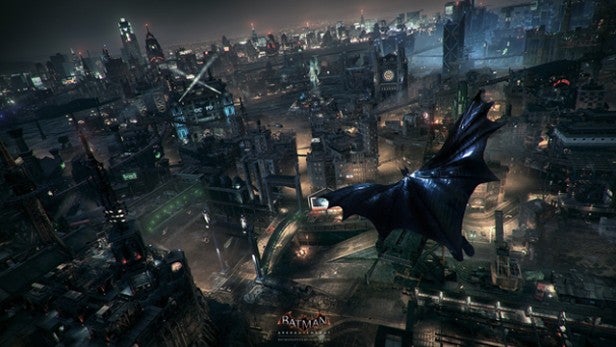 Rocksteady has introduced a number of new gameplay features to Batman: Arkham Knight with the biggest gameplay difference being the Batmobile itself. The control system has also been streamlined so you can sprint to the nearest edge and dive straight down, which makes controlling him a little easier.

There’s also a new finishing move – The Fear Takedown. This allows you to take out up to three heavily armed guards at once with one seamless move, as long as they are grouped together and haven’t spotted Batman. You’ll start by aiming at one enemy, then time will slow down to let you take out the next two enemies by simply aiming at them. The move is intended to give you a real sense of Batman’s power at the peak of his fitness You can even start the Fear Takedown when you’re crouching in a grate, which is very useful.

Another nice touch is that you can now use all quickfire gadgets, such as the Batarang, in mid-air, meaning you can attack enemies as you glide towards them.

Although the classic counter system is still there, Rocksteady has apparently added some new features that will enhance it somewhat. For example, Batman can now use a well-timed backflip to instantly KO enemies that are charging towards him. This could come in very useful, as normal enemies can now also do the charge and tackle technique usually reserved for larger enemies.

Batman himself can use quick ground strikes as well as the original full ground take downs, but apparently the latter will take longer to perform.

Similar to games like Sleeping Dogs, Batman will be able to use environmental hazards likes power generations in combat and he can use throw counters to grab enemies and send them flying into others.

The Detective Mode so popular in the past Arkham titles will still feature in Arkham Knight, but this time you’ll be able to access grates from further away, rolling under one with a button press.

Batmobile
The major gameplay changer with the new Arkham game is, of course, the Batmobile. You can summon it at any point in the game with a button press and you can even fall straight into the driver’s seat mid-glide if you so wish.

When you reach top speeds you can hit the ejector button and launch Batman into the air, using the momentum to perform faster glides and reach new heights in a single glide.

Rocksteady claims the Batmobile is designed to be “the best car in any game ever”, which is quite the bold statement. It is bulletproof and can smash through barricades, trees and building corners though.

“Basically… nothing stops the Batmobile. It’s pretty much an unstoppable force,” said game director, Sefton Hill. “When you think Batman, you do think Batmobile. It’s the one key thing that we’ve really felt that we always wanted to do.”

It is capable of performing burnouts, boosts, jumps and it can “rotate in a circle at a full stop to get you pointed in the right direction.”

As you can see in the above video, the Batmobile has two modes known as Pursuit Mode and Battle Mode. The first offers booster rockers and a power winch that lets you raise bridges and lifts.

The Battle Mode of the Batmobile beefs up the cart with increased firepower and enables the car to strafe, strangely. The wheels turn inwards so you can move the car at all angles, which feels a little odd to begin with, but lets you manourvere the vehicle a lot more precisely. This mode also offers missiles that lock to enemies and there are also immobiliser missiles to take out enemy vehicles.

You can quickly switch between the modes by pulling the left trigger. As long as you hold the trigger down, the Batmobile will stay in Battle Mode and give you access to features like the grapple hook and guns, which will help you solve puzzles and take out enemies.

What’s handy is that you can use the Batmobile remotely too, helping Batman out when he’s stuck in buildings and can’t see a way out. Often you’ll need to use the Batmobile’s winch to pull out walls or pipes spilling out toxic gases in order to progress.

Map
The game world of Batman: Arkham Knight is about 20 times bigger than that of Batman: Arkham Asylum and five times the size of Batman: Arkham City. Of course, the introduction of the Batmobile has forced Rocksteady to slightly redesign Gotham from the ground-up, widening streets and their layout and changing the location of city landmarks for example.

Arkham Knight actually takes place in a new central zone of Gotham City, which is split into three islands. 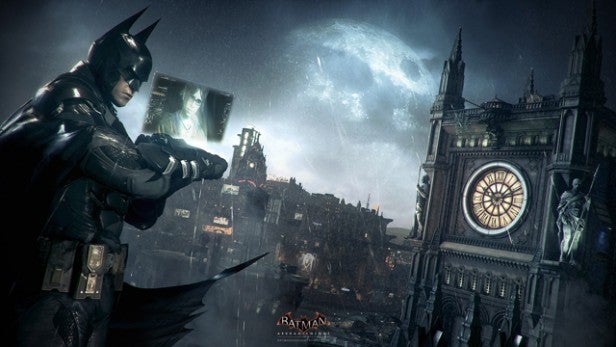 Arkham Knight takes place a year after the events of Batman: Arkham City and now Gotham is just starting to recover from the plight of Joker.

The new games starts when the Scarecrow has stepped into the role of head villain and is threatening to hit Gotham with a huge chemical attack, forcing the city’s authorities to evacuate all civilians.

There are still cops in the city, but everyone else is gone and now Gotham is inhabited by “scum, criminals and worse”.

Batman himself is at the peak of power and fitness and even has a new suit to boot, which looks very similar to the Batmobile with more armoured panels and is apparently made from carbon fibre.

Heroes
Batman/Bruce Wayne
James Gordon
Barbara Gordon
Barbara a.k.a The Oracle is supposedly a strong character in the game and is physically met by Batman, rather than merely being a voice and is apparently used to give Batman a bit more a human side. 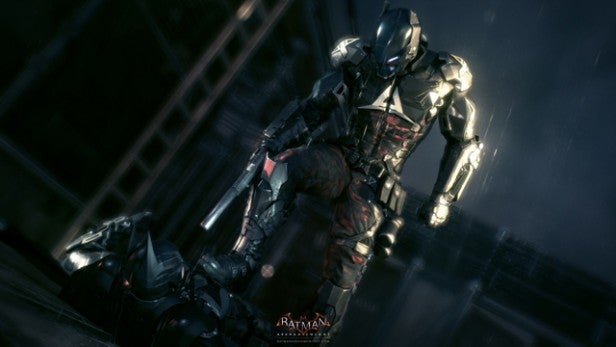 Villains
Arkham Knight
The main antagonist for this game is the eponymous Arkham Knight, a character specially created for the game by Geoff Johns, writer of Aquaman, Justice League and the Green Lantern. He is a militarised version of Batman that is rougher and more extreme than our hero.

“We wanted to introduce someone who could really challenge Batman, to go head-to-head with him in lots of different ways. This guy is definitely a formidable foe for Batman,” said Sefton Hill, Game Director.

Next, read all we know about Driveclub on PS4