Smith (pictured below) revealed the news in an interview with Trusted Reviews at a Baldur’s Gate 3 preview event in Paris.

“We’ve made changes to both [origin and custom] characters. Origin is much deeper and much more complex – the way they relate to each other and the world has also been deepened. The fact you can just be a vampire spawn is a huge change,” he said.

“But, if you go the other way and create a custom character, we’ve worked hard to make it so you can also get that with things like your class, race, background and class. These will change how people in the world will react and treat you. Your character will also know different things depending on what you pick. If you play as a cleric you’ll know things a fighter won’t. It’ll also change the way you can approach situations.” 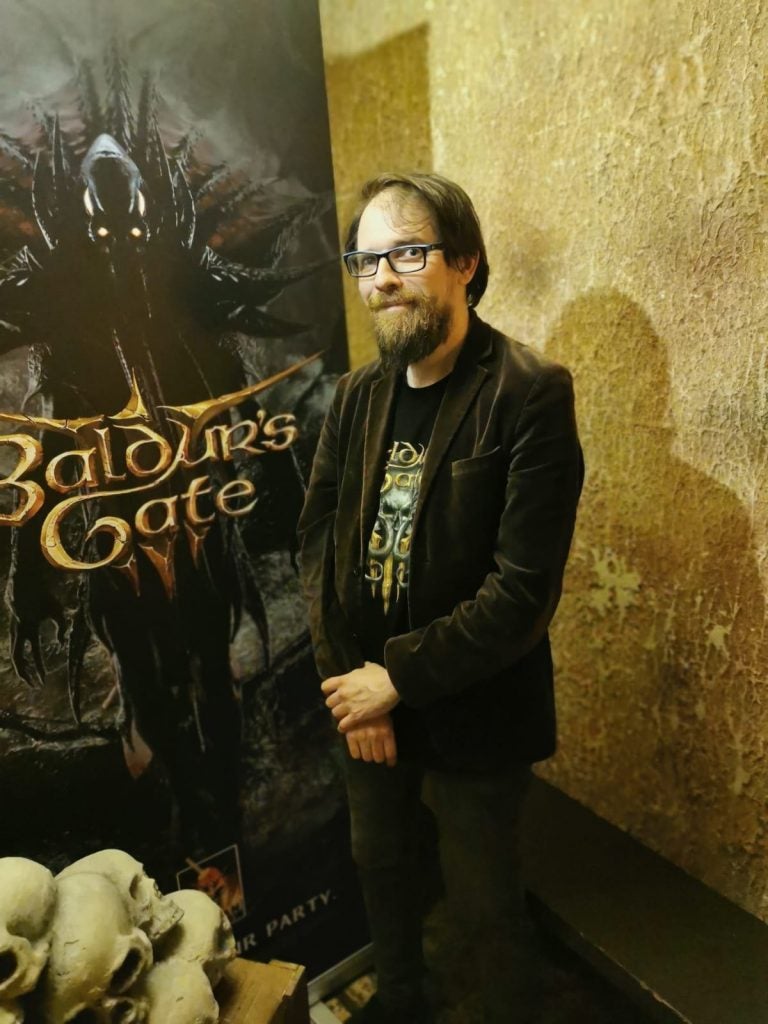 Smith added the studio is also working hard to make the game’s world react and evolve based on your character’s choices, as well as background.

This will be a big deal for avid solo gamers that like to create their own character. Divinity 2 was a great game full of wonderful pre-made, playable, “origin” characters, each came with their own defined story to play through on top of the main narrative.

But the game’s custom builds were a little light on character. If you played as a custom build you ended up being a clone of one of the pre-made playable characters and didn’t have any individual story outside of the overarching plot.

This made the experience feel slightly shallow and was one of the only issues we had with Divinity 2.

Baldur’s Gate 3 is a sequel to the original Bioware games that launched in 1998 and 2000. Smith told Trusted Reviews that Larian is working to stay true to the original game’s tone, despite the narrative being set 100 years in the future.

“On a series like this you have to be as respectful as you can with the story that’s already been told, especially when it’s been told as well as [Baldur’s Gate 1 and 2], but that put us in a good place,” he said.

“We want [the story] to be lighthearted and dark at the same time. One of the things that makes that easier is if you make a game that’s 100 hours long, you need multiple tones. There are regions of the game and characters that are incredibly dark – and we do push the horror angle that you saw in the teaser trailer – but there are also parts that are incredibly lighthearted. You have to have different tones, partly because that’s how life works, but also because the game would be boring otherwise.”

Smith added the timeline also gives Larian scope to revisit locations and characters from the original games and wider Dungeons and Dragons universe, but declined to go into specifics.

“The good thing is that 100 years is both a long and short amount of time in this world. There are races that live a really long time and characters that have been around quite a while. Volo is in the game and world even though he’s human – trust me there’s a reason why he’s still alive. There’s scope for things to return,” he said.

“But we can’t answer any questions about specifics as we don’t want to ruin things. The only character we’ve confirmed is Volo, outside of that I’m going to have to leave it with a dot, dot, dot.”

Baldur’s Gate 3 is set to launch at an unspecified point later this year on Google Stadia and Microsoft Windows. Larian hasn’t confirmed if it will get a console release yet. Jump over to our Baldur’s Gate 3 guide for a detailed breakdown of its gameplay, characters and story.