Avita drew attention in 2019 for its floral design on the Liber laptop but the company is kicking off the new year with a new kind of bang at CES 2020.

The Avita Liber focused on value while the new Avita Admiror pushes the boundaries on design. There’s also the new Pura which carries on the colourful tradition of the Liber. 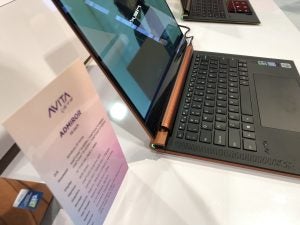 Let’s kick things off with the unique Avita Admiror – a device that is a CES Innovation Award honoree. The first thing you’ll notice about the Admiror is its chunky hinge. In an age where design tends to focus on sleek and streamlined, Avita has managed to make cumbersome look cool.

The striking laptop is set to be available in Blazing Brown, Flaming Copper, Delight Pink, Pride Blue and Traveler Green. I got to see the new models in person and the copper and green versions have to be my stand-out faves but the jury is definitely still out on the brown.

The combination of the large hinge and the contrast between the colour on the outside and the inner black styling creates the look of a journal or notebook closed – and it looks really good. 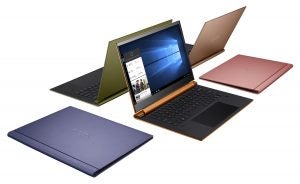 The hinge also allows for the rest of the laptop to remain thin and portless with the hinge housing a USB-C on either side. If the lack of ports is a problem for you then the company does include a dongle with USB-C, a headphone jack and HDMI.

Related: The ideal laptops for students

Despite its thin design and its predecessors focus on lower price for performance, the Avita Admiror isn’t being as shy on specs. The Admiror goes up to an 8th Gen Intel Core processor, up to a 4K IPS display (for the 15-inch model) and up to 512GB SSD storage.

Some may be disappointed by only being able to get up to 8GB of RAM as well as reservations about lacking the latest processors – however, it stills looks like it will be a solid performer.

UK pricing and release date for the Avita Admiror is yet to be revealed but we’ll let you know as soon as it emerges. 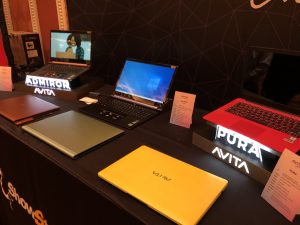 Alongside Avita’s more premium Admiror is the eye-catching Pura. The Avita Pura comes in a whopping nine colours. If you are considering picking up this device you are likely in it for the bright colours and we think the Silky White, Crystal Blue, Glossy Purple, Pink Diamond and Sparkling Pink are the pick of the bunch – the Shiny Yellow may be a tad too far.

We don’t yet have pricing or release date for the Avita Pura but we’d expect it to be shooting for the lower end of the laptop market similar to the Liber – which was priced at around £500.