A refreshed ZenBook Pro, with a smaller 14-inch screen and new screenpad was also on display, next to a revamped version of the entry-level Asus ZenBook S, now with Core i5 and i7 Whiskey Lake options – whichever CPU option you go for, you’re guaranteed gigabit Wi-Fi speeds (so long as your router supports 160MHz), faster video rendering times and better battery life.

There’s plenty of Zen to go around – check out our in-depth range guide to get up to speed on what’s new with the 2018 ZenBook series and see which one’s best for you. 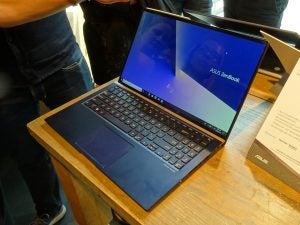 The new ZenBook 13 and 14 are all but identical in terms of specs, both featuring the same processor options (Whiskey Lake Core i5 or i7), Nvidia GeForce MX150 or Intel’s UHD Graphics 620 iGPU and 8GB or 16GB of LPDDR3 RAM.

Both displays are Full HD (1920×1080). Asus says that all of the displays feature 178 degree viewing angles and cover 72% of the NTSC colour gamut, which is roughly equivalent to 100% of the sRGB gamut. We’ll know for sure once we’ve got them in for testing.

All of these displays feature Asus’s ‘NanoEdge’ technology, which is essentially a fancy way of saying that they’ve got very slim bezels; each new ZenBook boasts a 95% screen-to-body ratio. You’ll also have the option of taking a ZenBook with an anti-glare display, which knocks about 100g off of the weight, not that this would matter much, as these are all pretty lightweight laptops.

Asus’s new ErgoLift hinges have the advantage of lifting the laptop’s lower half off of the desk surface, which is intended to make for a nicer typing experience, as the keys are angled towards you, and allowing for better cooling and audio performance.

The ZenBook 15 is similar to the 13.3-inch and 14-inch variants in a lot of respects too. The main difference is that you’ll have the option of going for a Full HD or 4K display. The battery is also significantly bigger, but if you go for the 4K option, we expect that you won’t get as much mileage as you would with the Full HD option. Large, detailed screens require a lot more juice, after all.

Price details for the various 2018 Asus ZenBook iterations have not yet been released.

Asus has not yet mentioned when the new 2018 ZenBook laptops will be going on sale. 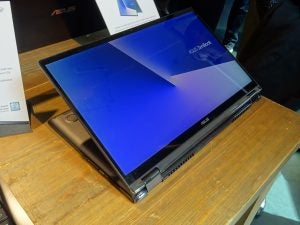 Both of these new 2-in-1s will feature the latest 8th gen Whiskey Lake CPUs from Intel, the ErgoLift hinge for greater comfort, cooling and audio, and a ‘world-facing’ camera which will let you enjoy mixed/augmented reality applications.

The camera is an optional extra for the ZenBook Flip 13, whereas it’s included with the ZenBook 15 as standard. Some versions of the 13.3-inch ZenBook will also come with Asus’s screenpad, a touchpad with additional context-dependent controls, while none of the 15.6-inch versions will feature this.

Judging by the specs, the Flip 15 is the one that’ll be better suited to creatives. You get two screen options – 4K and Full HD – both of which promise excellent colour reproduction, but the 4K one is PANTONE validated. Both options come with a discrete GPU (an Nvidia GeForce GTX 1050 Max-Q) with 2GB of GDDR5 VRAM.

Finally, there will be a dual-storage version of the ZenBook Flip 15, where you’re promised the best of both worlds, fast SSD speeds and high HDD capacity.

Both of the 2018 ZenBook Flip 13 and Flip 15 feature NanoEdge near bezel-less displays and are roughly 10 per cent smaller than their predecessors. 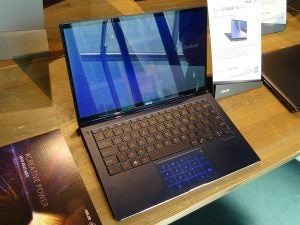 Asus has yet to talk about prices for the new ZenBook Flips.

Equally, we don’t know when the Asus ZenBook Flip 13 and Flip 15 will be hitting shelves.

As the name implies, this laptop is aimed at professionals, photographers and designers in particular.

The 14-inch Full HD display apparently covers the entire eRGB gamut and it’s also PANTONE verified, which gives you some indication of its colour accuracy. Without a colorimeter to hand we’ve not yet been able to verify these claims, but that’s something we wouldn’t normally do until we got hold of a review sample anyway. The 16:9 aspect ratio suggests that it’ll be well suited to video playback and streaming.

Rounding out its pro credentials is an Nvidia GeForce GTX 1050 Max-Q dGPU – the same one you get with the new ZenBook Flips – but this time you have the option of taking 2GB or 4GB of GDDR5 VRAM, depending on your working needs.

The display and the GPU combined with the promised boost to rendering times that you should get with a Whiskey Lake CPU means that powering through video edits on Premiere Pro ought to be a breeze.

We saw a ZenBook Pro 14 (UX480) earlier in the year at Computex, alongside a larger ZenBook Pro 15 (UX580) sibling. But this was before Intel had revealed its new 8th gen laptop processors.

Asus has confirmed that the 2018 ZenBook Pro 14 will come with Whiskey Lake CPUs, but the jury’s currently out whether the Pro 15 will get the same treatment. We’d assume so, but we’ll wait until we have confirmation.

Related: Best Intel processor: Core i3, i5, i7 and i9 explained

We don’t have so much as hint of a rumour of a whisper about the ZenBook Pro 14’s release date just yet. 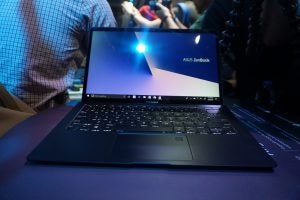 We saw a ZenBook S at Computex, but the one Asus had on show at IFA is a revamped Whiskey Lake-equipped version.

A key benefit of ditching the i5-8250U and i7-8550U for newer models is apparently better battery life.

A battery drain test saw a ZenBook S with Whiskey Lake Core i5-8265U and the screen dipped to 150 nits last 20 hours when playing video via the Windows Movie & TV app. That’s a great figure, so let’s hope that this bears up in our testing and the i7 version is similarly impressive.

Aside from a decent battery, what do you get with the ZenBook S? The choice of FHD and 4K screens, all of which promise 100% sRGB colour gamut coverage, a very light 1kg body, and the same ErgoLift hinge which should at once make typing easier and stop the ZenBook S’s base from getting too hot.

As the ZenBook S represents a stripped back, entry-level equivalent to the main ZenBooks and the more powerful ZenBook Pro, something’s got to give and that something is ports. There’s no HDMI ports or microSD or SD card readers, just three USB ports, all of which support display as well as power and data transfer.

We’re hoping that the price is going to be nicer to reflect the smaller size and fewer connectivity options. In the meantime, while we’re waiting on price info and release dates, here are the specs:

Note: We weren’t able to spot any models on Asus’s IFA stand, so for now we’re mainly going from the spec sheet and our notes from back in June.