With Intel’s 9th Gen processors recently revealed, manufacturers have been scrambling to ship new motherboard that are compatible with the upgraded chipset. Asus is one of the first to reveal its motherboards, with the new Asus Z390 range boasting revolutionary new features.

Included in the new Asus Z390 lineup are the Prime, TUF Gaming, ROG Strix and ROG Maximus XI series. That might be quite a few motherboards to wrap your head around, but Asus has stressed it only really has two main categories to differentiate the various models: non-gaming and gaming.

Of course, that probably isn’t enough to help you determine which motherboard to buy, so we’ve broken the range down and listed all the new features below to make it easier for you.

The new Asus Z390 motherboards have a few impressive feature on show. One of the other exciting additions is AI Overclocking. This intelligent software can evaluate the quality of the installed processor and then work out an estimated voltage frequency for your rig. By doing this, it should avoid under-powering your computer or frying your components.

MEMOK! II and OptiMem II also feature in the Asus Z390 motherboard range. The former is exclusive to Asus hardware, which allows users to fix DRAM-related system boot failures with just a press of a button, while the latter helps to maintain signal integrity for more efficient memory overclocking.

Fan Xpert 4 also returns to Asus motherboards, which smartly alters the speed of the fan when it senses that your Asus graphics card is starting to overheat. This ensures all your components are kept completely cool. 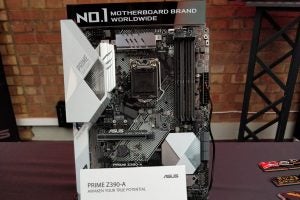 Labelled as “the foundation of the Asus motherboard”, the Prime series is the most basic of the Z390 bunch. Aimed at day-to-day users instead of gamers, the Prime offerings are almost certainly going to be the most budget-friendly Z390 motherboards available.

Both the 8th and 9th Generation Intel CPUs will be supported. All the features above will be present too, including the new new AI Overclocking and the returning Fan Xpert 4.

The two Prime models are predictably both full-size ATX boards with little need to save space. 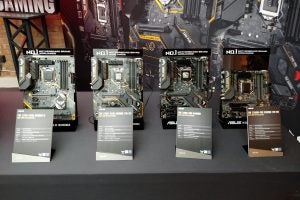 Motherboards can be intimidating components for beginner PC builders, especially since they can be so easy to break. TUF Gaming, meanwhile, prides itself on creating durable and dependable motherboards.

Following extensive work with various vendors, plugging components into the Asus Z390 TUF Gaming range is apparently as easy as slotting Lego together, making it the ideal motherboard for those who have never before dabbled with PC crafting.

Three motherboards feature here with the new Z390 chipset, all but one offering wireless connectivity straight out of the box. The TUF Z390M-Pro Gaming [Wi-Fi], meanwhile, is a micro-ATX motherboard. This means it has significantly smaller dimensions than the other options.

And then there’s the TUF Z370-Plus Gaming II. This motherboard has the older Z370 chipset installed instead of the new Z390, but you’ll still fortunately be able to pair it with Intel’s 9th Gen CPU. Still, it will probably compensate for that with a more affordable price, which should be a boon for those who aren’t fussed about upgrading to a new processor. 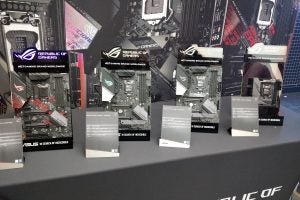 This geared-up-for-gaming Asus Z390 motherboard range may be your best bet if you’ve already got a STRIX graphics card, as pairing the two together will unlock exclusive features. Of course, most other graphics cards will work here too, with the STRIX motherboards offering a potentially reasonably-priced option for gamers.

All but one of the motherboards have standard ATX dimensions, with the ROG STRIX Z390-I Gaming taking the Mini-ITX form – the smallest possible motherboard. Having such a compact build allows for more case space for upgrading, plus more air circulation to prevent components from getting hot and bothered. Expect a premium price in return though. 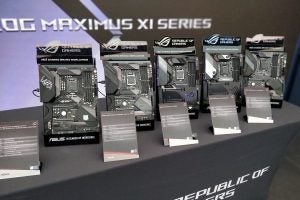 The ROG Maximus XI range is the most feature-packed motherboard range in Asus Z390  line-up. They’re the most expensive as a result.

The ROG Maximus XI Extreme stands out as one of the most exciting motherboards here, featuring an advanced water cooling system, Game First V, Aquantia 5G LAN and even a LiveDash OLED screen that can be customised to display things like system temperature, fan speed and CPU frequency.

Every one of the motherboards in this range should be well equipped for high-end gaming, although don’t expect them to come cheap.

Still TBC. All we know is that they will be launched at some point after Intel’s 9th gen CPUs hit the shelves on October 19.

Are you thinking about buying one of the Asus Z390 motherboards? Tell us @TrustedReviews