Asus has kicked off 2017 with a punch-you-in-the-face style high-end gaming rig that looks more like a Transformers movie extra than a traditional tower PC.

The new GT51CH, released under the Republic of Gamers brand, will deliver the 7th-generation Intel Core i7-7700K CPU (Kaby Lake), which can run on “Ultra” graphics settings.

That’ll play nice with not one, but two Nvidia GeForce GTX 1080 graphics cards (in SLI configuration), that the company says can handle 4K gameplay at up to 66fps.

If all that muscle isn’t enough, ASUS is also including the Aegis III app which enables overclocking of the CPU, GPU and memory.

Gamers will be able to increase processor speeds to 4.8GHz, while one of the GTX 1080 GPUs can be overclocked too. 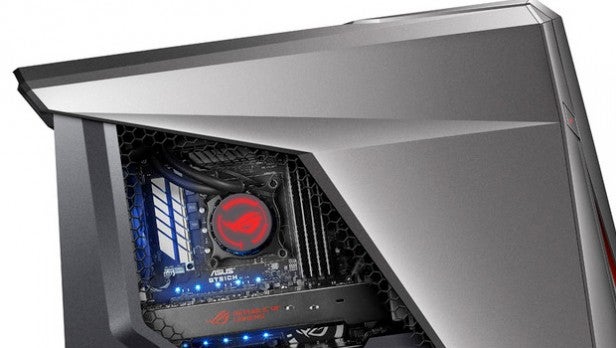 If it matters to you in any way, there’s also customizable ASUS Aura lighting on the central air intake, which offers eight million colours. And if that’s not enough, the lighting experience can also be customised to mirror the theme of the game you’re currently playing.

ASUS is yet to announce the pricing, but the GT51CH will be available sometime from April 2017.

Are you in the market for a new killer gaming rig? Share your thoughts on this beast in the comments below.