Nick: Assassin’s Creed: Unity is easily the biggest game in this franchise so far in terms of the size of its environment. Is that where you started, with the idea of building the biggest environment to date?

Alexander: When we first decided to make Unity we had two things in mind.

We wanted to start it off by going back to the roots of the series; stealth set in a large sprawling European city. We had that in Brotherhood with Rome and in Revelations with Constantinople – which was a lot closer in terms of size to Unity. But we wanted to push the limits. We wanted one single city, densely populated and we decided on Paris. We had a few cities in mind… 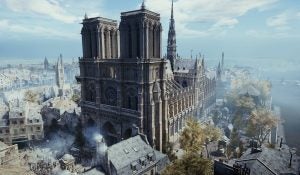 (Laughs) No! Because we might use them at some stage. Anyway – all of those aspects pushed us towards Paris.

If you look at Black Flag you have a lot non-linear exploration to it and that’s something we want to bring the Assassin’s Creed brand to. Black Flag did it tangentially, using a ship. We wanted that to be the core experience of the main game.

So we structured a multi-tiered city, with catacombs, underground passages, buildings you can enter and rooftops and filled it with activities and then just let the player roam through it. To achieve that aim, we needed a massive city. 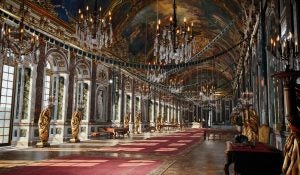 So did Paris dictate the time period you were setting Unity in? Or did you already have the French Revolution in mind?

No – that came afterwards because once we had our city we had to pick an age to set the story in. We looked at different timelines in Paris – keeping in mind that we needed it to be densely populated – and we settled on pre-French Revolution as the time because of its turmoil. Not only does it make the city more interesting in terms of atmosphere, but it works in with mechanics. You have crowds, for example, that the player can use as diversions.

Ubisoft has two persistent world games in the pipeline. Assassin’s Creed: Unity seems to be standing right at the cusp of that genre, given its size. Do you think that this is a direction the franchise will go in?

That’s a good question. We take risks on every single project with this series. If you look at Assassin’s Creed 3, which introduced ships, we had no idea we were going to take is as far as we did with Black Flag. That was borne out of the fans’ reaction and feedback.

The structure of Unity is a big risk too. We’ve never had an Assassin’s Creed that had co-op in the main campaign – that’s usually a solo experience. The way things are laid out are different too – in other AC games, the main campaign is about 80 per cent of what the player experiences. In this side missions and side quests account for about 40 per cent, the main story is 60.

So what we’ve built here is a game that resembles a persistent world. Are we going to take that one step further next time? I think that’s a question we haven’t even answered internally. If we do we’d have to preserve the core of Assassin’s Creed. You don’t want to go in a direction that modifies the experience to the point where fans don’t recognise it anymore. 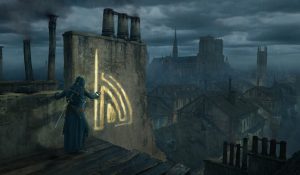 Solo play was a large part of the AC core experience before Unity. Is it true that some of the missions need more than one player in order to be successfully completed?

Well Brotherhood and Heist missions are designed for two-to-four players. But the open-ended nature of how they’ve been constructed and the fact you can modify Arno through the game means that you can perform these missions in different ways. If you attempt these missions by yourself it just means you have to be a little more creative. The direct approach will probably not work.

In the end it’s trial and error and pattern recognition. Whatever path offers the least resistance is the one you’ll take. 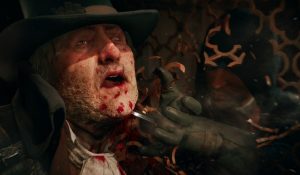 Is that what necessitated the change in combat mechanics?

Yes. That and the fact the game is more geared towards stealth. And that came from co-op. What we realised quickly was to take the core experience and have you share it with friends. For that to be fun, we needed to give players customization so they could play different roles within the mission. We came to the realization that standalone, self-contained story missions were better for co-op. 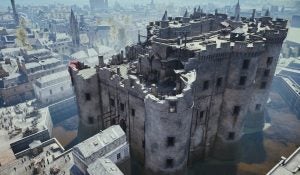 Unity’s setting and story seems to be a sly take on current events. The
gulf between rich and poor is bigger than ever and you’ve planted your
game in a time when the have-nots rose up and overthrew the haves. Was
that intentional or was that just serendipitous?

I think it’s a bit of both! We definitely try to pick moments in time that are relevant to current affairs. I strongly believe, though, that any story at its core needs to be simple to follow – that’s why Assassin’s Creed: Unity is a redemption quest. What Arno is doing is very clear, but we’ve also added layers to the narrative.

In the second level we’ve added a love story between traditional foes – Arno and a Templar assassin. Love vs duty. Under that we have a statement on extremism and how opposing political parties when taken to an extreme became the exact same beast. There’s also the Revolution where social order is being eradicated and replaced with something else. All of the aspects are embedded in the story and we’re hoping they’ll make an impression on the players.

So, with that in mind, do you think if Assassin’s Creed: Unity had been released about a month ago in Scotland and played en masse that Scotland would’ve left the UK?

Assassin’s Creed Unity is out on November 13 for the Xbox One, PS4 and PC.