Worried you’ll lose your job to AI robots? You could find work as the driver of a Mercedes-Benz ‘Robovan’  – at least for now.

Starship Technologies, which designs and manufactures pavement navigating delivery robots, has partnered with Mercedes-Benz to unveil specially fitted Sprinter 3.5t vans, which will act as “motherships” to carry the bots closer to their targets.

Starship first showed off its robots last year to address the “last mile” problem in delivery, with the final few streets and drop off the most expensive for packages and take-away orders.

The Starship robots trundle down the pavement at 4mph, carrying their load of up to 10kg inside a locked compartment, with cameras and sensors looking where to go and helping them cross the street.

They’re mostly autonomous, but humans keep watch in case the robot’s systems find a patch they can’t navigate alone, or local teenagers decided to try to steal one.

There’s now another way humans are helping the (mostly) autonomous delivery machines. Starship has teamed up with Mercedes-Benz to kit out Sprinter vans with racks and chargers, carrying the little robots a bit closer to their destination, as “due to their low speeds, they’re not good for long distances,” according to Starship’s Ahti Heinla, who also co-founded Skype.

Once at the specified point, the robot wrangler taps a tablet to send them destination details, loads their cargo, and they automatically drive off the van for delivery, returning after the job is done. When the robot returns for more packages, it autonomously rolls up the ramp, is refilled by the driver with help from an automated, light-guided picking system, and departs again, rolling around the neighbourhood as far as two miles to make its deliveries.

“For these robotic helpers, these vans will be a mothership” and act as a kind of ‘hub’ in each neighbourhood, said Volker Mornhinweg, head of Mercedes-Benz vans, at the launch in Germany. 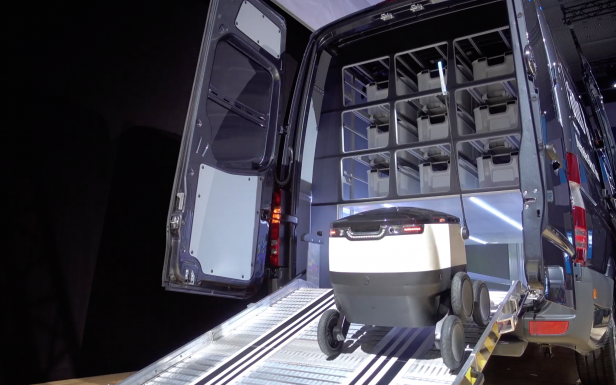 Alongside delivering at a specific time, the aim is to cut costs and emissions – all those trucks and vans hurtling around your neighbourhood delivering Amazon Prime packages have a knock-on effect, after all – but while delivery drivers could be forgiven for scowling at a Starship when it rolls past, the Robovans concept does require a human to drive the Mercedes, open up the door, lower the ramp, and manage the packages.

Mercedes-Benz is also working with drone maker Matternet on a similar system for air-borne deliveries.

That partnership Mercedes’ Vito vans equipped with a laser-guided landing pad for drones on the roof, allowing the vehicles to receive on-demand deliveries wherever they are whilst on the move.

The idea is that drones can deliver specialised missing parts to a building site, medical supplies to remote locations, or spare car parts for remote road-side assistance. The drone simply leave a retailer with the requested delivery, find the van via a beacon, and then asks the customer via an app if it can safely land. Estimated delivery time is 20 minutes.

“Idle time on construction sites because of missing tools is a daily occurrence on building sites,” said Andreas Raptopoulos, founder of Matternet, adding it leads to time wasted sitting around waiting for a deliver or driving to the shop themselves.

He also predicted the drones could be used for more basic packages, delivery one-hour consumer products. The retailer would dispatch the item via a drone to the van, which would finish the trip to the customer. In other words, a human driver is still needed to do the final leg and knock on your door.

A report last year from the University of Oxford suggested as many as 35% of jobs are at high risk of being lost to automation in the next two decades, but a Pew Research survey of AI and robotics experts suggested half believe such technologies will make more jobs than they create.

In the case of Starship’s robots and Mercedes’ Robovans, delivery drivers therefore still have a future as robot wranglers – that is, until the Robovans themselves are fully automated, though Mercedes as yet has no plans for that.

Or at least, none that it’s admitting.

Watch The Refresh: The best tech news and gossip every week

Will humans and robots work side-by-side in the future, or are robots going to steal the vast majority of our jobs? Let us know in the comments below.