An anonymous employee told the Guardian the quality control contractors working on Siri can listen to recordings of iPhone owners discussing their medical information, drug deals, and even couples having sex.

The recordings are exposed to the contractors charged with grading the quality of the Siri responses to users queries. However, the small print doesn’t explicitly mention that Apple uses humans to “help Siri and dictation” and “understand you better and recognise what you say.”

The whistleblower expressed concern with the number of instances the contractors are exposed to the sensitive information from mistakenly-activated “Hey Siri” recordings. The recordings are pseudonymised, but the concerns remain because of other information that could be used to reveal the identity of the user.

He or she said: “There have been countless instances of recordings featuring private discussions between doctors and patients, business deals, seemingly criminal dealings, sexual encounters and so on. These recordings are accompanied by user data showing location, contact details, and app data.”

In a response to the Guardian, Apple says less than 1% of all Siri activations are used by the grading contractors.

In a statement, Apple said: “A small portion of Siri requests are analysed to improve Siri and dictation. User requests are not associated with the user’s Apple ID. Siri responses are analysed in secure facilities and all reviewers are under the obligation to adhere to Apple’s strict confidentiality requirements.”

The company prides itself on being the most privacy-focused of all the major tech players, so these revelations are sure to put a dent in the reputation. Accidental “Hey Siri” recordings are a problem the company should probably address, given the revelation human contractors are catching people in compromising situations. 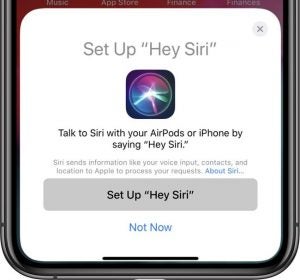 If you don’t want to risk an Apple contractor listening in on your special cuddle time, then you can turn off Hey Siri in Settings > Siri & Search and ensure Listen for “Hey Siri” is toggled to off.