The Apple Watch has been officially announced alongside the iPhone 6 as the company’s first wearable.

Following over a year of leaks and rumours surrounding the wrist-worn gadget, Apple has finally lifted the lid on the Watch.

The iOS 8 wearable will go head to head with existing Android Wear devices such as the LG G Watch and Motorola Moto 360.

The Apple Watch uses the watch’s classic dial to add more features. You can use the “Digital Crown” to zoom in and out of Apple Maps. You can scroll through lists using it too, making sure you’re not blocking the screen.

Pressing the Digital Crown also gets you back to the home screen, which has a very circular design. It allows for a much more precise control of the UI without you having to touch the screen.

“We thought not only of the function, but also the way it looks,” explained Tim Cook.

It’s looking pretty much like an iPod Nano strapped to your wrist, but with a customised UI that is perfect for your wrist. 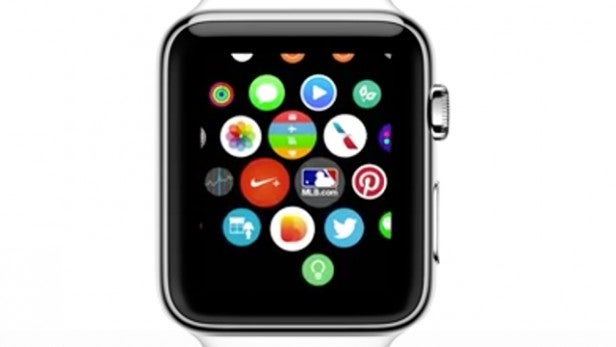 It recognises that you’re raising your wrist and brings the display to life. The whole new interface is tailored to the challenges of a smaller screen. Apps have been designed with a lightweight interaction in mine.

Pressing the button below the Digital Crown brings up your favourite contacts that you can contact with a tap.

The screen itself is still a touchscreen so you won’t need to only rely on the Digital Crown. But it recognises force too. Tiny electrodes around the screen recognises the different between a touch and a tap.

At the heart is a custom designed chip and there’s a pulse detector on the back. It uses the GPS and Wi-Fi from your smartphone.

It charges by conductive wireless charging that combines the classic MacBook MagSafe charges that completely seals around the back of the Apple Watch.

Apple Watch features a range of watch faces to choose from, all with notifications in some way. You can customise their appearances and their functionality too.

There are six different straps, all of which are interchangeable. The sports band is made from tough, durable plastic. There’s another with soft leather that is sports resistant. There’s a leather band too with a metal clasp.

If you want a metal band, there’s also one too. 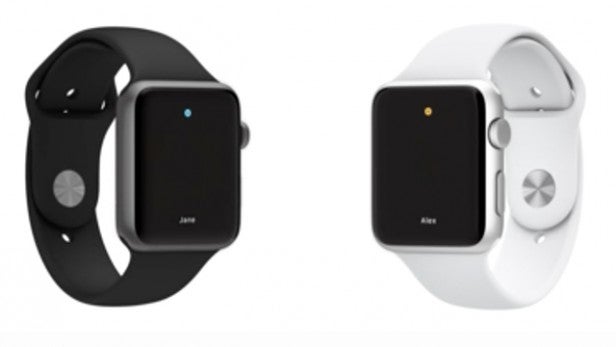 There are two different sizes, one for larger men’s wrists and a smaller version for the ladies.

There are three purchase options. The classic Apple Watch, the Apple Watch Sports or the Apple Watch Edition, which is made from 18 carat gold that has been engineered to be twice as hard as normal gold.

Tim Cook explains the company has been working on the Apple Watch for a “long time”, but didn’t get into specifics.

Kevin Lynch then took to the stage to give the first live demo of the Apple Watch.

The clock is at the centre of the UI and you can pan just by swiping the screen. You can arrange the apps just as you like them. Take a look at all of your apps by zooming out with the Digital Crown.

The watch face can be customised by force touching and then scrolling with the Digital Crown, including colours and functionality.

As for notifications, the Apple Watch uses the Taptic engine to subtly rumble your wrist with incoming information – which of course can be personalised too.

For messages, the Apple Watch picks out phases that you might want to quick reply with. If they aren’t appropriate you can use dictation to create a message or use one of the new custom emojis. The faces in particular are pretty awesome, as you can customise the mouth and eyes to convey the most appropriate emotions.

Of course, Siri is built into Apple Watch. She can be accessed by pressing the Digital Crown and then scrolling to go through the list of results.

You can use Apple Maps for navigation on your wrist too, although there’s nothing new in terms of public transport updates. It will tap your wrist in the direction you need to turn though, which is pretty clever.

There’s another new feature specific to the Apple Watch that lets you send drawings and morse code messages to your friends. 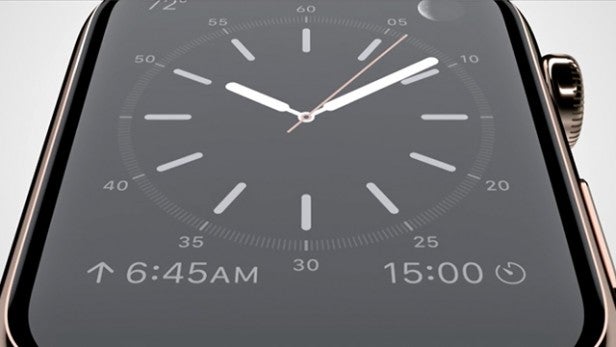 PassBook is also available on the Apple Watch, so you can pick up your boarding passes on your wrist and you’ll be able to unlock your W Hotel door with the watch too.

Other apps confirmed include City Mapper for public transport updates, Nike for fitness features and BMW to help you relocate your car.

It has an accelerometer, tracks your heartrate and uses the GPS and Wi-Fi in your phone to track your movement.

The Fitness app has three rings that close when you reach your target – Movement, Exercise and Stand. The first two are pretty much self explanatory, but the Stand ring will encourage you to get off your bottom throughout the day.

You can earn achievements and rewards for your activities too.

“Apple Watch is going to change the way we look at fitness”, adds Cook.

You can also control your Apple TV with the iWatch and use it as a viewfinder for your iPhone 6’s camera too. Of course, it’ll work with Apple Pay too – Apple’s new mobile payments system.

Apple Watch compatibility
The Apple Watch will be compatible with the new iPhone 6, iPhone 6 Plus and the last gen iPhones, the iPhone 5S, iPhone 5C and iPhone 5.