Apple has used its traditional September product announcement to unveil the next-generation of Apple Watch. Apple Watch Series 4 (or Apple Watch 4) sees the line receive a welcome physical upgrade, a few more fitness-focused features and an electrocardiogram (ECG) monitor, too.

The Apple Watch Series 3 looked almost identical to the ones that came before it. There were some minor tweaks to the weight and thickness of the shell – mostly due to the added LTE modem – but the general design was what we’ve come to expect from an Apple wearable.

For the Apple Watch Series 4, that’s all changed. Apple has given the wearable its first significant design upgrade, and it looks a whole lot better for it. While the overall look feels familiar, the face has been stretched out nearly edge-to-edge to give a much larger panel. The Apple Watch Series 4 also comes in bigger sizes than previous editions: 40mm and 44mm as opposed to 38mm and 42mm.

The resolution of the panel has also received a boost, allowing more stuff to be crammed on the screen at once. For instance, there’s a new watch face that packs in many more complications than before, allowing you to keep an eye on the weather, music, fitness rings and more without having to switch faces or apps.

Apple has updated a lot of its other watch faces too, allowing much more stuff to be visible. There are a couple of new faces, also, including a particularly neat-looking fire version. 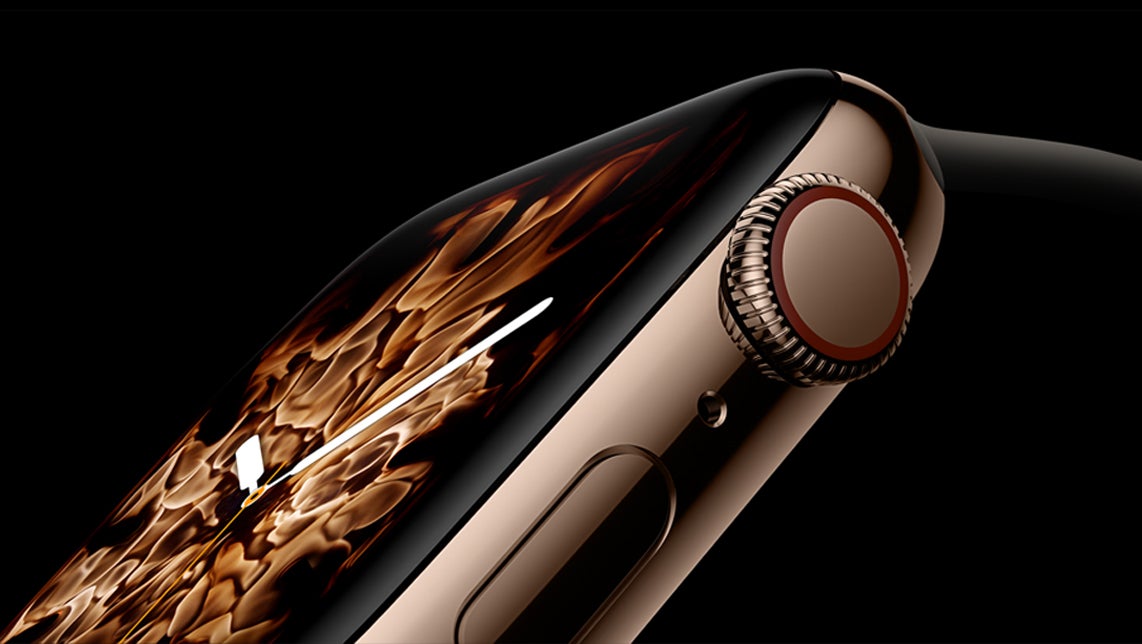 The rest of the watch retains a familiar feel. There’s a Digital Crown on the side, with a quick-access button below. We haven’t yet held the watch for ourselves, but it does appear to look slimmer and therefore lighter than previous versions of the device. Apple did say you will now get a haptic response when you move the Crown, which should give a more mechanical feel via incremental clicks. Apple has also moved the microphone to the other side of the speaker, to reduce echo for voice applications. The speaker gets an upgrade and is now 50% louder than on the previous generation.

Charging is still via a magnetic clip that attaches to the bottom of the watch, and the device will support AirPower – Apple’s wireless charging pad that can also charge Apple AirPods and iPhones. 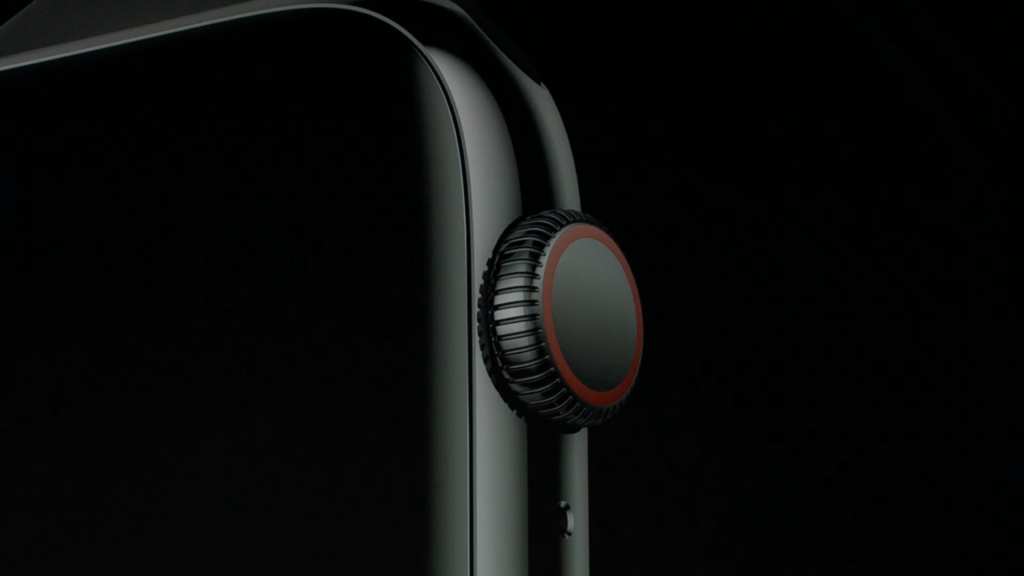 The Apple Series 3 was a feature-packed wearable and remains one of the most feature-rich watches.

It boasts the option of LTE for phone-free calling and music streaming; however, there’s a version without this capability too. In the UK, this LTE functionality has been restricted to EE thus far and, as such, it isn’t immediately available to all. It’s far more widely adopted in countries such as the USA.

LTE remains an optional feature on the Apple Watch 4 and, once again, this is signified by a red accent on the crown. This time around, the cellular version of the Watch 4 will be available through Vodafone as well as EE.

Both the Watch 3 and Watch 4 benefit from a generous number of sensors. There’s GPS, GLONASS, Galileo, QZSS, a heart-rate monitor, accelerometer, ambient light sensor and a gyroscope. The devices are also water-resistant, so you can happily work up a sweat in the gym without worrying about any damage. Apple says it has updated the accelerometer in the Series 4 and it can now detect if you fall, notifying emergency services if it doesn’t sense movement after.

Something new for the Apple Watch Series 4 is an ECG sensor. This will monitor the electrical activity of your heart over a time period, feeding you the results just by tapping your finger on the digital crown. The new watch will also alert you if your heart rate falls below a certain level.

Inside the new Apple Watch, you’ll find an updated S4 Chip. Apple says this is 2x faster than the S3 from the Apple Watch Series 3 and it’s now a 64-bit dual-core processor.

Battery life should, Apple says, remain the same as before. This means it should last 18 hours, which Apple calls ‘all-day’. We’ll, of course, have to properly test this when we get the new Apple Watch in for review. 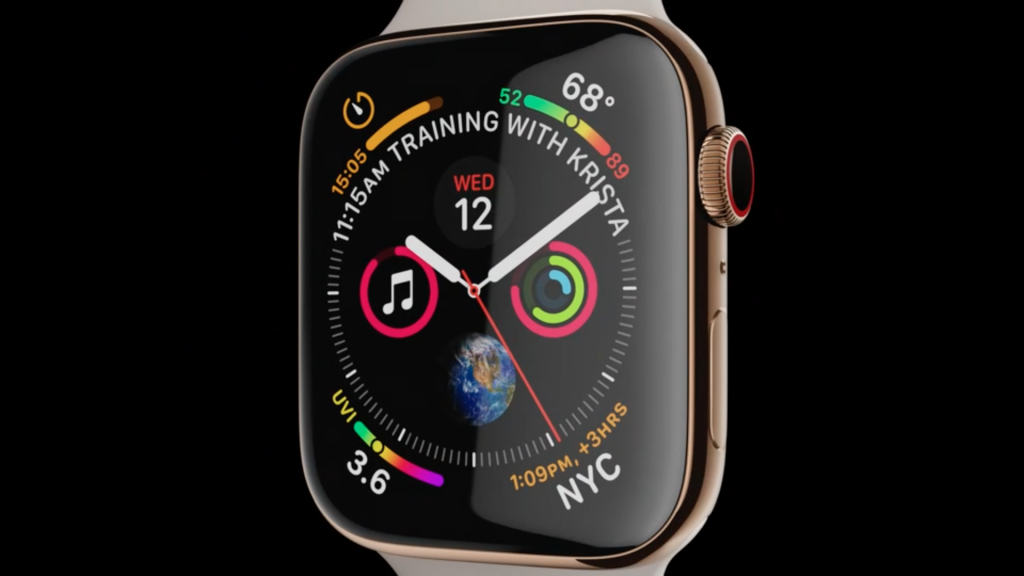 Due to its range of different styles and strap options, the Apple Watch 3 was available at a load of different prices. The most affordable versions, without LTE, start at £329 (38mm); the LTE range starts at £399 (38mm) and £429 (42mm). This price rises all the way to £1349 for the priciest LTE ceramic variety.

The Apple Watch 4 comes in a few different variations, including a new polished stainless steel and a shiny-looking gold. There will be aluminium ones on sale too and these will come in silver, gold or space grey. Prices will start at $399 for the GPS version and rise to $499 for the LTE-enabled one. We’ll update this piece once we know UK pricing and other information on further prices for the various styles.

If you’ve been hankering after a visual refresh for your Apple Watch, then the changes in the Series 4 will no doubt go down well. The ECG sensor is a welcome addition, too, once again demonstrating Apple’s focus on fitness for these wearables. Still, we’ll need to spend a good amount of time with the new Watch 4 to see whether it’s really worth the upgrade.