The company states the new Mac OS is focused on “clarity as well as utility”, with a iOS style OS X that Apple clams is “the best ever version of OS X”.

Icons have been redesigned to be much flatter, just like Apple did with iOS 7 and the toolbars and window materials have been updated.

There’s a huge amount of what Apple calls “translucent materials”, with your window subtitles adapting to the colour temperatures of your overall background.

The app dock at the bottom of the screen has been transformed with the same translucent bar as iOS 7 too, which lets your background seep through. This all extends to the apps too and the way they are presented with OS X Yosemite.

The Today View has also been updated to mimic exactly what is offered with iOS 7. Its translucent too (we’re noticing a theme here) and offers calendar, reminders and weather notifications. You can even enhance the Today View more with 3rd party widgets and apps.

“You can extend the contents of Today View with widgets from the App Store”, explains Apple’s Craig Federighi.

Spotlight has also been revamped that lets you launch a search field right in the middle of the screen. You can look up people and places etc that lets you pull in all content from the internet and your apps, with a quick preview built right in.

It also offers quick conversions for distances among other things and auto-complete for incomplete entries. If you type in restaurants for example, you’ll be presented with a quick map for near locations, all within the Spotlight search rather than having to navigate to your browser.

Apps including Calendar have been given a few tweaks too, with the diary app presenting a new sidebar that presents location information for your upcoming events.

There’s also a new Dark Mode, but Apple has yet to detail exactly what that is as yet.

OS X 10.10 Yosemite introduces a new iCloud Drive that make all documents accessible from the Spotlight Search, even if they’re not stored locally.

“You can store all your files however you want” and they will sync across iOS, OS X and even Windows.

As for Mail, it has been redesigned with a quite streamlined look and it introduces a new feature that lets you send larger attachments via a service called MailDrop.

This will let you send attachments up to 5GB in size and if you send them to a Mac they’ll appear exactly the same as you send them. For Windows users, they’ll be sent a link from which they can securely download the attachment.

Mail will also let you annotate emails using the cursor, so you can add doodles and notes quickly.

Safari has been stripped right back, with the single search bar super-powerful for OS X 10.10 Yosemite. When you type in search results, you’ll be presented with Google results, Spotlight Search results and other information without having to click on any links.

Tabs work in a different fashion too, with tabs from a single website being stacked so you can more easily move between them. No matter how many tabs you have open, you can now scroll along the tab bar to see them all. Tab View also gives you a birds-eye view of all open tabs with that stacking system we previously mentioned.

Safari also makes it possible to create a private window, keeping the rest of them accessible without complication. The browser also has an improved Share option, which brings up recently contacted people and RSS feeds so you can more quickly share content. 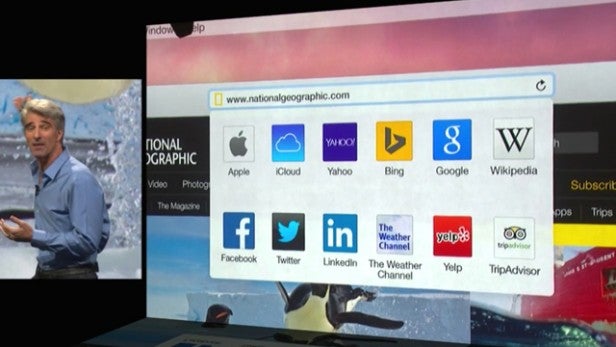 When you share content, you can highlight specific parts of image, even adding images, captions or other details using Mark Up within Mail. For example, you can draw a speech bubble and it is turned into a icon that is editable.

What’s really exciting is that AirDrop now works between iOS and OS X and Apple has made sure “transitions between devices [is as] natural as possible.”

A new feature called “Handoff”, which lets you swipe your work from one device to another in real time. This service will even pick up mail you’re writing on one device and prompt you to switch to Mac if it’s nearby.

You can now even start a hotspot from your Mac to your iPhone, with the Mac recognising your iPhone is nearby and letting you set it up from the Wi-Fi menu.

All your messages now show up on your Mac too, even if they’re not iMessages, which is great functionality. This works with phone calls too:

“We’re able to do the same thing with calls. You can accept the call on your Mac and use it as a speakerphone.”

This works even if your phone isn’t right next to your Mac, which is pretty darn handy and useful, especially as Apple has extended this to web pages too. This means that you can dial numbers listed on webpages right from your Mac.

OS X 10.10 Yosemite is definitely all about continuity, and it really shows.

The new Yosemite is available to developers today, but general users won’t get it until the autumn. It’ll be free though.

You can sign up for the OS X 10.10 Yosemite beta in the summer, even if you’re not a developer.