Apple has unveiled its latest software, the newly dubbed macOS, at WWDC 2016. Here’s everything you need to know about the operating system.

Here’s what you need to know:

As widely predicted, Apple has rebranded OS X (a 15-year-old name) as macOS at WWDC, and there’s plenty that’s new other than the moniker. Craig Federighi, Senior VP of Software Engineering, also confirmed that the next version of macOS would be called macOS Sierra. Unfortunately, we’re still not privy to a release date, although we’d expect for it to arrive around September(-ish). However, we do know that Apple’s macOS Sierra public beta will arrive in July 2016. 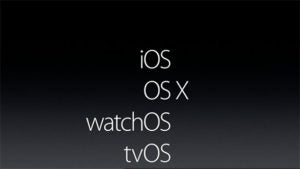 Federighi announced a number of new features. The first was Auto-Unlock, which lets Apple Watch users automatically log into their MacBooks without having to type in a password, based on proximity. If you’re wearing the Apple Watch, the computer will recognise that it’s you, not some nefarious third-party, trying to log in.

He also revealed a new Universal Clipboard feature, which syncs your clipboard – everything you copy, with the intention of pasting – across all of your devices. So if you copy something on your iPhone, you can paste it on your macOS device. It’s a part of Apple’s Continuity platform, and it’s a very welcome change.

Related: 6 watchOS 3 features that might make the Apple Watch worth it 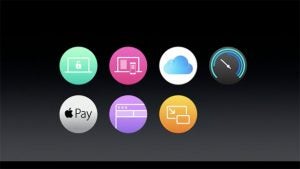 4. iCloud and your files

, adding a new feature that lets you sync your desktops between two or more Mac devices. A bonus of the new synchronisation is that you’ll also be able to view your desktop files – documents or photos, for instance – from an iPhone. “We want all of your documents and your desktop accessible to your everywhere,” said Federighi.

But the biggest improvement is Apple’s new Optimised Storage initiative. Sierra will let iCloud remove old files from your Mac – files that you don’t use – automatically, and save them in the cloud. Files that you’re actually regularly working on, however, won’t be touched. Federighi said that he tried this on a Mac, and the free space went from 20GB to 150GB – not bad, but maybe he’s just a ruddy file hoarder!

The next big announcement was Apple Pay, which is now available on Apple’s Safari web browser. The move turns Apple Pay from a contactless payments system to a true online PayPal rival. However, you’ll still need an iPhone on your person to authenticate the purchase. Safety first, folks. 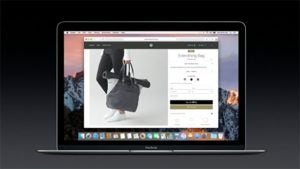 There’s also a new picture-in-picture mode: “Your video goes into a nice little pip, you can move it around the screen, and it works great in full-screen as well.”

Probably the biggest announcement (aside from the macOS rebrand) is that Siri has finally moved to the Mac, as was heavily rumoured prior to WWDC. Federighi said: “We have macOS Sierra right here, and the first thing you’ll notice is right here on the dock we have access to Siri.”

“On macOS, Siri will work almost identically to how it works on iOS. You’ll be able to call it to schedule reminders, send text messages, open apps, look up movie times and sports statistics, and so on. On the Mac, Siri is activated by clicking its dock or menu bar icon.”

You’ll also be able to use Siri to search through files and save searches, which is an advancement on the capability of the iOS version.

Live Updates: All the highlights from WWDC 2016

Tell us what you think of Apple’s WWDC 2016 keynote in the comments below.